Long awaited, kind of anticipated, but little purchased. That’s the story of the new Lincoln Continental. This week, Gildshire learned of the imminent demise that is due for one of America’s most-iconic nameplates. Motor1 first gathered the information.

Ford’s flagship luxury model first left the scene in 2002. At the time, fuel concerns and global vehicular downsizing caused the demise of the Continental. In truth, the luxury ride was losing ground and market share to a newly robust Cadillac. The Continental was trending older, while Caddy was building better cars. Fifteen years later, Ford Motor Company revived the Continental. As it turned out the timing couldn’t have been worse. All sedan sales are in decline in the midst of a car buyers rush for crossovers and SUVs. 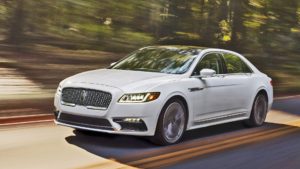 How downward has the trend been for the Continental, in particular? December 2016 was the high water month for Lincoln’s luxury sedan. They sold almost 1,850 units. Sales fell to 1,167 to begin 2017. They fluctuated around the 1,000 mark for the rest of that year. However, there was a small spike back to 1,216 last December. Alas, 2018 hasn’t been so kind thus far, with just 815 sales in January and 758 in February. Three-quarters of a thousand Continentals sold is the historic low mark for the new Lincoln Continental model.

In part, the death knell for the new Lincoln Continental was the result of a success story in another segment of the Ford family. The new Navigator is garnering praise from car publications and ownership groups alike. The Navigator falls under the label of SUV. It only makes sense for Ford to concentrate on its success.

Is there any hope for those who love the sound of “Lincoln Continental?” The only possible salvation is for the full-sized sedan to be replaced on Ford’s next-generation D6 platform. The next-gen architecture is highly flexible. It can configure for front-, rear-, or all-wheel-drive applications.

That said, the crossover rush isn’t abating anytime soon. So, it’s counterintuitive for Ford to market another dog on the market. It looks like Memory Lane for the new Continental now, and all Continentals in the future.