Gildshire and other top online business magazines look for business trends brought about by societal change. That’s where the next Richest People in the World will be found because the leading edge of change is where explosive growth lives. So, what societal changes are we experiencing in the last eight years? Nothing since 2010 has more profoundly changed the face of America than the spread of legal weed. First experienced in Washington State and Colorado, the spread sweeps across the land. One knew that when California fell into the “legal” category the spread would continue unabated. For, as California goes so goes the rest of the country, at least eventually. So, the passage of California Prop. 47 led us to the following question. “What “new and different” will come out of legal weed? Our researchers came up with some interesting new products. 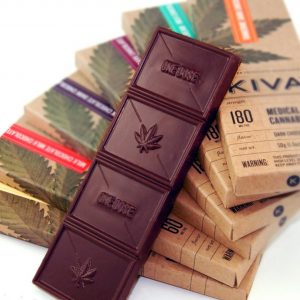 Some of the new items are edible. That didn’t surprise us, because edibles are the entry point for many people anxious to try weed. We were surprised, however, at the range of edibles now available. A company known as Kiva is on the leading edge of the movement. They create cannabis-infused candy/confections ranging from chocolate espresso beans to medicated mints. A top-seller? Cannabis chocolate in a 50 gram (1.7 ounce) bar. Kiva offers more than a dozen edibles through hundreds of cannabis dispensaries in California, Nevada, Arizona, and Illinois. Their business is spreading, but Kiva isn’t new to the cannabis line. They nabbed one of just a few “best edible” awards at the 2013 San Francisco/Los Angeles High Times Cannabis Cup. (Yes, that’s a real thing.)  Prices will vary, and weed candy bars range from $10-$20. The mints are $15. Chocolate-covered espresso beans and blueberries are $18, or so.

A high-end chocolatier known as Defonce is another leader in the edible realm.  They specialize in weed chocolate bars, but with a hip new twist. Their products range from a Matcha Bar made of white chocolate to coffee and mint flavors. The bars have just about 90 mg of THC. But, they can be broken down into 5 mg servings. That would be the way to go for consumers who want easy microdoses rather than a day-long high. Defonce is different in other ways, as well. They boast an all-natural extraction/farming process. Many in the company have a background with major chocolate companies.

Don’t think the new cannabis products are all about what you can eat, though. There is a big world of non-smoke and non-eat products newly available as a result of sweeping legalization. Industry innovators are going for the gusto. One leader is a company known as Herb essntls. They market a full line of cannabis-infused skincare products. The products are THC-free,  but they all contain the plant oils.  What can you buy to maintain that youthful glow? The products range from lip balm to face creams. Herb essntls products reside in shops across the world. The location list includes New York City, Austin, Minneapolis, London, Paris, Vancouver B.C., and Stockholm. Also online through several e-retailers. Be aware, though, their products aren’t cheap: A single pack lip balm retails for $12.00, the lotion for $48.00, and the moisturizer for 60 bucks!

All in all, weed legalization may become the biggest economic driver of this decade. But, it won’t be the only driver. A related slumbering giant is awakening.

After a break of almost 80 years, hemp plants grow in American soil once again. The reason for the break in hemp production is a matter for a separate article. But, suffice it to say its demise was mainly fueled by the cotton industry. In fact, you cannot get high from sucking hemp. There just isn’t enough THC to make that happen. Now, though, U.S. policy is acknowledging that new products from hemp could help restore our ailing agricultural economy. It could even play a role in quelling climate change. If in the process, it gives the American farmer a leg up versus Canadian farmers who make, oh about $1 billion a year on hemp, that would be good, too.

All this, because enough people pulled the “Yes” lever on Prop. 47? Indeed, elections have consequences. It’s true at the national level, and the state level, as well.

Tom Petty once sang Everybody Must Get Stoned. The delivery mechanism is in place. As one of the top online business magazines, we’ll be on top of the new products trend.