‘On the Basis of Sex’ Headlines Jan.11-13 New Releases

Hello again, movie fans, and welcome to the rebranded Gildshire Goes to the Movies bi-weekly feature you have grown to know and love. We may have a new headline every week, but we’re still the gang of wacky funsters that preview new releases, talk about our favorite actors, and give out the Gildshire Movie of the Fortnight award. Sure, we could call it “semi-weekly” or something less British than “Fortnight,” but fortnight makes us feel as one with “Downton Abbey,” coming soon to a movie theater near you in a full-length feature. Rotten Tomatoes has four new releases with ratings and reviews. 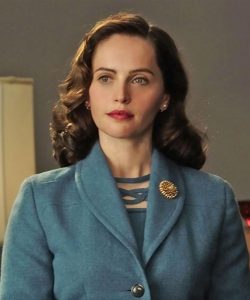 “On the Basis of Sex,” rated PG-13 for some language and suggestive content.

Ruth Bader Ginsburg is a rock star, plain and simple. Her rise to the Supreme Court and her tenure there is the stuff of legend. Does this movie capture the subject matter in an entertaining and enlightening manner? For the most part, it does. We were hoping it was Movie of the Fortnight material, but we’ll settle for a good story, told well. It stars Felicity Jones as RBG, Armie Hammer as Marty Ginsburg, Justin Theroux as Mel Wulff, and Kathy Bates as Dorothy Kenyon. Rotten Tomatoes, 71. Gildshire 4.2 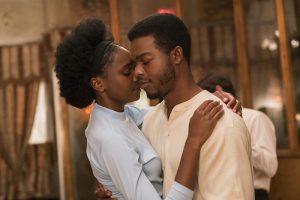 …but “Beale Street” is the best of this week’s new releases.

“If Beale Street Could Talk,” rated R for language and some sexual content.

Set in the turbulent ’70s this movie is about history, race relations, and family ties, surrounded by a love story. The “arrested for a crime he didn’t commit” storyline should ring true today. That’s a lot to tackle, but this film’s eloquence makes it the runaway winner of the Movie of the Fortnight award. It stars KiKi Layne as Tish Rivers, Stephan James as Fonny, Regina King as Sharon, and Colman Domingo as Joseph Rivers. Rotten Tomatoes 95, Gildshire 4.5. 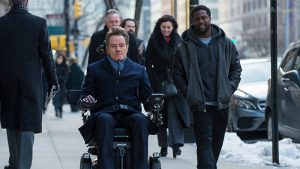 A lot of star power in this one…

“The Upside,” rated PG-13 for drug use and suggestive content.

Based on a true story, this movie employs two eminently bankable stars to tell the story of an unlikely friendship. Alas, predictability has been the downfall of many such efforts, and the consensus is that’s the way this goes down. Also, the movie is so based on a French film called “The Intouchables,” that it is barely a work of its own. It stars Kevin Hart as Dell, Bryan Cranston as Phil, Nicole Kidman as Yvonne, and Juliana Margulies as Lily. Rotten Tomatoes 40, Gildshire 3.7. 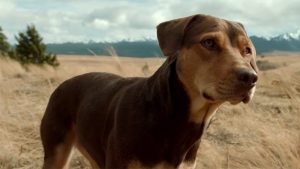 …but “Bella” in “A Dog’s Way Home,” will capture more hearts.

“A Dog’s Way Home,” rated PG for thematic elements and some peril.

Raise your hand if you got teary-eyed when you saw “The Incredible Journey.” For those who raised your hand, thank you for your honesty. This is a movie of the same ilk, and it will most appeal to dog lovers. Fortunately, there are enough of those to make a handsome profit. For those who may not have seen “The Incredible Journey,” this is a movie about a dog who finds his way home over a great distance. It stars Ashley Judd, Edward James Olmos, Alexandra Shipp, and Wes Studi. Rotten Tomatoes 60, Gildshire 3.0.

That’s it for this week, at least when it comes to new releases. Make sure add a little extra butter to your popcorn, because it was your New Year’s resolution to eat better this year.

After all, tell me what’s “better” than extra butter?

Breakups, Makeups and Getting Back Together