Out of the Ordinary New Year’s Eve Celebrations

On the last night of the year, you expect to curl up with Ryan Seacrest in a Snuggie. Wait, what? Oh, you won’t actually be with Mr. Seacrest. He’ll be live from Times Square doing the Dick Clark’s New Year’s Rockin’ Eve thing. You’ll be watching from your couch. Or, to shake things up a little, maybe you’re standing in someone’s kitchen drinking the green punch with the lime sherbet in it. Gildshire’s Mall of Magazines is a no-judgment zone, so these New Year’s Eve celebrations are good. Goodness knows millions of people are going to be doing the exact same thing. But, what would you say to some ideas for bringing in 2019 differently than you brought in 2018…and 2017…and 2016…and…?

It isn’t too late to plan a new kind of New Year’s Eve vacation. It won’t be as once-in-a-lifetime as being in Times Square on New Year’s Eve, but our ideas have two distinct advantages over the celebration in New York City. First, they are warmer, since the average temperature for NYC on New Year’s Eve is twenty-five. Second, your chances of having your pocket picked are much, MUCH lower. 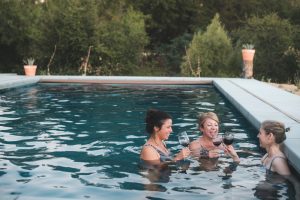 Wine, water, and wellness are all part of the Sagrada vibe.

Your New Year’s Day might be a handful of Tylenol and a heating pad. I know I said we don’t judge, but isn’t it past time to break that habit? You won’t need the analgesics or the palliative heating implement if you celebrate New Year’s Eve with an upward facing two-foot staff pose. Go west on a yoga retreat, for your good health and the health of the tummy you spent five weeks padding.

In Santa Margarita, California and other cities along the central coast yoga centers such as Sagrada Wellness have New Year’s Eve and New Year’s Day retreats promoting body renewal and physical/mental/spiritual wellness. San Diego’s Spiritual Retreat Center invites you to a 4-day getaway. It will include yoga, hiking, and education about taking on a vegan lifestyle. An add-on option is a January 1 private sailboat cruise and a tour of San Diego’s famed Balboa Park. San Diego is a long way from New York City. This is as far as you can get from the frenzy that is Times Square.

Large items are dropped from high buildings in many cities on New Year’s Eve. Sure, New York has its big ball, but Atlanta drops a peach! But, do any New Year’s Eve traditions say “our town, our thing” like Boise, Idaho? That’s where you will find a day of celebration in homage to…the potato! Catch a flight, or make the pretty drive to Boise for the snow park luge races and ice skating. Then make your way downtown where the world-famous “GlowTato” will ascend at 6:00 pm, only to plummet gracefully to the ground six hours later. The giant French Fry-to-Be will be accompanied by a special orchestral and vocal arrangement of the Star Spangled Banner, making this a day and night of charm in one of the West’s most charming cities.

Not far from Tucson, Arizona, Elkhorn Ranch ponies up a New Year’s Eve experience including piñatas, barbecue, and world-class Mexican cuisine. They follow up the initial festivities of NYE with horseback rides to greet the New Year. Imagine celebrating the start of a new trip around the sun on the back of a snorting steed! (Actually, the horses are very gentle and well-mannered. But you can always remember yours as a snorting steed if it makes the experience better.) The next morning, plan to finish the adventure with a bicycle tour of Tucson’s richly historic neighborhoods.

Gildshire knows that New Year’s Eve in Times Square is bucket list material for many people. However, if it doesn’t sound like fun to you, or if you have already done it once, one of these ideas are sure to make your New Year’s Eve/New Year’s Day memorable. Have fun, but be safe! People are counting on you for many New Year’s Eves to come.

Winter Activities: All About Snowshoeing