Have you ever seen a model of a famous building? Have you ever seen one that was created almost entirely from natural materials? The New York Botanical Garden Holiday Train Show is a sight to see! It is a view of New York City like no other because all the buildings are scale models made from a variety of natural materials, there are 25 trains and trolleys zipping around nearly a half-mile length of tracks, and the fantastic bridges that connect the boroughs of New York City soar overhead for an aerial view. 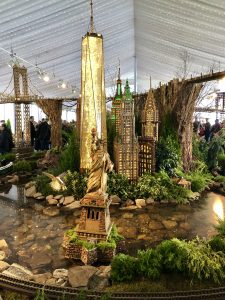 New York Botanical Garden (NYBG) has been presenting the Holiday Train Show since 1992. Paul Busse, creator of the Holiday Train Show, is a botanical architect and landscaper. After he graduated from university with a degree in landscape, he discovered g-scale model trains and dove into a journey of incorporating trains into his landscaping. Once he began installing train layouts, he never stopped. He founded his company, Applied Imagination, in 1991 and has created countless award-winning garden train displays all over the country. Though he is now retired, his daughter, Laura Busse Dolan, has taken over the company and continues his legacy of creating enchanting installations.

The 2019 NYBG Holiday Train Show displayed more than 175 famous New York landmarks from the Statue of Liberty to the Coney Island lighthouse to the Lyndhurst Mansion, from structures demolished over the years to three one’s that are still standing, all scale models re-created with a foam board core that is then embellished with bark, leaves, berries, seeds, acorns, and other sources found in nature. Central Park and it’s iconic monuments were a new addition this year and are absolutely stunning! Bethesda Terrace, the Cop Cot, The Metropolitan Museum of Art, Naumburg Bandshell, Belvedere Castle, and more were re-created amongst moss and holly to represent the park itself. It is a remarkable showcase of the park and many of the aspects that make it special. 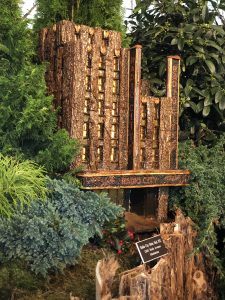 While staring at the intricacies of each replica, a model train rushes past every few minutes. From stem engines to passenger trains to a single car that looks like a bumblebee, the trains travel along the mosses, over streams, across bridges, and create a welcome sense of movement. The trains are of course a large part of the show, but what makes them extra notable is that this year, the length of their tracks are more easily seen. The show typically takes place in the Enid A. Haupt Conservatory, but it is currently undergoing major renovations. Thus, the show is in an entirely new location, which provides a clearer view of the trains, their tracks, and the buildings themselves in contrast to the busy flora of the conservatory.

Stepping into this winter wonderland surrounding a marvelous miniature New York gives the visitor a lot to think about. Have you really looked at the buildings that surround you? Are you familiar with much New York’s history? What is it about New York that you love? There is so much to be seen in New York that it makes one wonder how these specific buildings were chosen? Sure, the Freedom Tower and Yankee Stadium are easy choices, but what about the homes on Staten Island and demolished buildings that no longer stand? This exhibition is not only artistically stimulating, but encourages the viewers to really take a look at their home (or place they are visiting), question their knowledge, and find answers to those questions.

This spectacular show is on display until January 26th, 2020 and it is absolutely worth seeing! In person, you can look at all the small details and understand the incredible amount of work that goes into each and every building. From the branches forming the bridges to the radish seeds spelling out “RADIO CITY,” each feature is astonishing. If you are looking for some holiday fun, the Holiday Train Show at NYBG is the place to go!