“If I can make it here, I’ll make it anywhere.” Those words are supposed to bring to mind Frank Sinatra in New York City with his hat at a jaunty angle. They weren’t supposed to mean literally “make it.” Unfortunately, the Big Apple has become the North American epicenter for the Covid-19 virus. Gildshire’s Lev Radin is there with his photojournalist’s instincts and hardware, so the pictures of the masked people and deserted streets are his.

I suppose it was inevitable that New York City would battle with this insidious disease. The island of Manhattan gets a million visitors a day, according to the New York City Travel and Information Bureau. 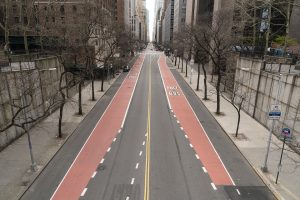 A million? A day?

Yes, take a moment to think about that number. A million visitors a day, and many of them shoulder to shoulder on a subway, and the triangle of land known as Times Square. Multiply those by the numbers of coughs and sneezes they emit. Tomorrow, do the same thing all over again. Is it any wonder that New York has become the focal point of the fight against the Covid-19 virus. If the Seven Boroughs didn’t have enough germs of their own, that many more are being imported every day, courtesy visitors from Hamtramck, Walla Walla, and Chattanooga.

New York City covers a relatively small amount of ground for the number of people who visit. That’s why “covering your mouth,” while a good idea, is not foolproof. The city planners never gave thought to a hotspot. And so it is.

New York City Mayor Bill De Blasio was a little bit slow on the uptake. Perhaps that was because he was recently running for President. Or maybe because he believed the virus would die once it hit our shores. Either way, a few weeks ago, he was telling people to go to work and not to worry about it. 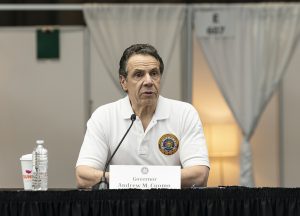 “I have heard good things about Gov. Cuomo.”

Yes, on the other hand, New York Gov. Andrew Cuomo has gotten high marks for his no-nonsense, clear-eyed and honest press conferences, and his requests for help from the federal government. He made many requests well before things got out of hand in his state’s signature city.

Maps of the most afflicted areas of the country show hot spots around every major city. But the hottest of the hot are our cities with deep water ports. Denver his a hot spot, but not nearly as hot as San Francisco, Seattle, Los Angeles, New Orleans, and now, New York City. These are the ports from which Americans go and come, as well as where visitors to our country first find American soil. Likewise, these are the cities where germs mingle together, and a pandemic virus gains a foothold.

For the next month, the world will pay close attention to New York City. But, this time, the city won’t even notice it is being watched. It will be busy clearing citizens and visitors of this insidious germ. As I type these words, hospitals are going up in the Jacob Javits Center, and on the grounds of the Billie Jean King Tennis Center.

God Bless you, New York City. You are the Crown Jewel that the rest of the world associates with the United States, so may your battle with the Covid-19 virus be a swiftly successful one.