“I am thoroughly disappointed by the…outcome of yesterday’s game. No team should ever be denied the opportunity to reach the title game (or simply win a game) based on the actions, or inactions, of those charged with creating a fair and equitable playing field. As is clear to all who watched the game, it is undeniable that our team and fans were unfairly deprived of that opportunity yesterday. I have been in touch with the NFL regarding yesterday’s events. I will aggressively pursue changes in NFL policies to ensure no team and fan base is ever put in a similar position again. It is a disservice to our coaches, players, employees and, most importantly, the fans who make our game possible. The NFL must always commit to providing the most basic of expectations — fairness and integrity.”

That’s the last thing the National Football League and Commissioner Roger Goodell would want to come from a playoff game.

If you have been in a coma since Sunday morning, this is what took place. Late in the New Orleans Saints/Los Angeles Rams game to decide who goes to the Super Bowl, Saints’ quarterback Drew Brees launched a pass down the right sideline, intended for wide receiver Tommylee Lewis. Rams defensive back Nickell Robey-Coleman, beaten on the route, plowed into Lewis, willing to exchange a pass interference penalty for a game-winning touchdown. To the surprise of everyone in the building and watching on TV, no penalty flag was forthcoming. The Rams won the game, but the Saints fans grieve on.

(Full disclosure: Gildshire isn’t, in particular, a Saints fan. But we have enough of a heart to be devastated on behalf of the Saints’ devoted fan base.)

After the game, the sign over the Lake Pontchartrain causeway aired out grievances. 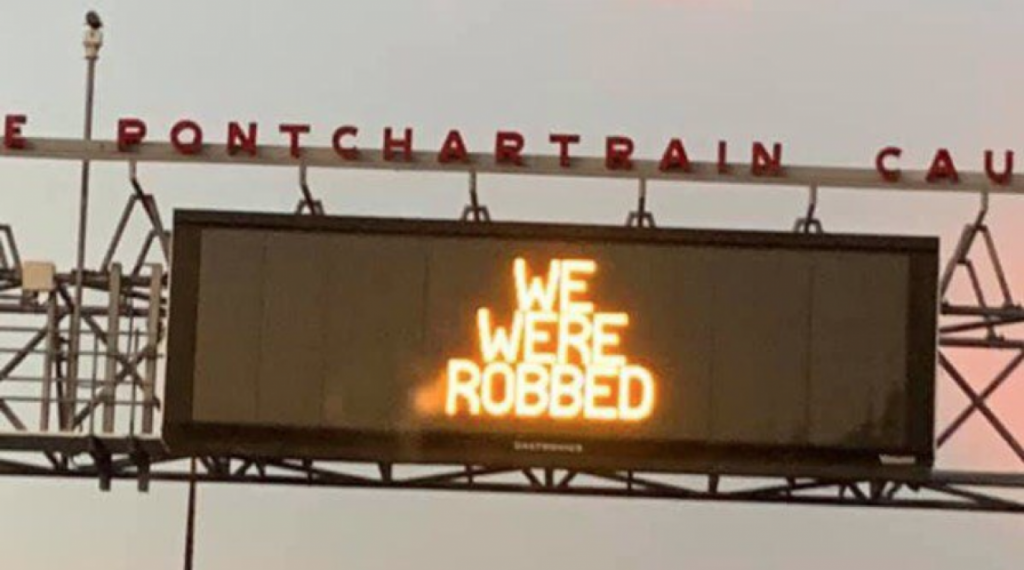 NFL fans are a passionate lot.

Is there redress possible? What can address the valid grievances experienced by Saints fans?

Let’s answer the second question first. Nothing. However…

…there is a rule in place that would allow Commissioner Goodell to overturn the unfair outcome. In fact, Rule 17, Section 2, Article 1, as noted by Pro Football Talk’s Mike Florio, does exist.

“The Commissioner has the sole authority to investigate and take appropriate disciplinary and/or corrective measures if any club action, non-participant interference, or calamity occurs in an NFL game which the Commissioner deems so extraordinarily unfair or outside the accepted tactics encountered in professional football that such action has a major effect on the result of the game.”

Toward that end, a New Orleans attorney has filed a class action lawsuit on behalf of Saints fans. The suit demands that Goodell to step in and right the wrong. Essentially restarting the game with a couple of minutes to go, with the Saints having the ball, first and goal.

Silly stuff, to be sure. But, is there more at stake than Saints angst?

Indeed there is. Millions of people held losing betting tickets on the Saints, but those tickets would have cashed had the Saints kicked a game-winning field goal.

As sports gambling becomes ever more prominent through the Supreme Court ruling that took down the prohibitions against it, the stakes increase. Sadly, the stakes aren’t high enough to send the Saints to this year’s Super Bowl…which is where they belong.