Home » NFL Draft First Round: What to Expect Thursday

It’s been SO LONG since New England on the Super Bowl (again), that we CAN’T WAIT for football to return. Well, it isn’t football, but the draft is something to talk about until the real thing arrives. In that way, the National Football League Player Draft is like a birthday cake for football fanatics. So what is the NFL Draft first round? It’s that part of the birthday cake where the cake part and the frosting part blend together, waiting for your finger to slide across the plate. Yes, the NFL Draft first round is the very best of the off-season. The best college players introduced to new teams, in front of a national television audience. It begins Thursday night at 8 pm Eastern/5 pm Pacific. The ABC family of networks will broadcast the draft on its various channels. Check your local listings. Nashville is the host city for this draft.

“So, what can we expect and, will my team make a splash?” That’s what we are going to try and ascertain, no matter where you live and who you call “your team.” Read on, for Gildshire’s thoughts on the NFL Draft first round. We may even delve into some juicy stories about rounds 2-7, as well.

This has been the division most speculated about for the last few months. That’s because the Arizona Cardinals have the first pick, and new Head Coach Kliff Kingsbury is known to covet Oklahoma QB, Kyler Murray. That’s a dilemma because Arizona drafted QB Josh Rosen in the first round last year. Look for a possible trade so the Cardinals can get more picks for a team that has more worries than quarterback.

Other news in the NFC West:

The Rams well remember being pushed around on both sides of the line in the Super Bowl. They will look for linemen. San Francisco needs help at receiver, but this draft is seen as a weak one at wideout. The Niners will stockpile in the later rounds. Seattle needs an edge rusher after trading Frank Clark.

It has been eight years since the Carolina Panthers drafted Cam Newton with the Number One pick. Newton’s shoulder injury means it may be time to look that direction again. They would love for Dwayne Haskins to fall to them, or they could move up to grab him earlier.

Other news in the NFC South:

Tampa Bay needs line help, and the Bucs seem willing to give Jameis Winston another chance to be the man. New Orleans needs help up front. Atlanta has traded picks during drafts in previous years.

The Green Bay Packers invited Missouri quarterback Drew Lock in for a visit, but they aren’t ready to sign Aaron Rodgers’ replacement. He has some gas in the tank. Look for Green Bay to shore up their defensive backfield.

Other news in the NFC North:

Tight ends aren’t sexy picks in the NFL Draft first round, but the Vikings could choose one anyway. The Detroit Lions may look for receiver help but probably in later rounds. Chicago needs lots of help at running back to take some heat off young Mitch Trubisky under center. 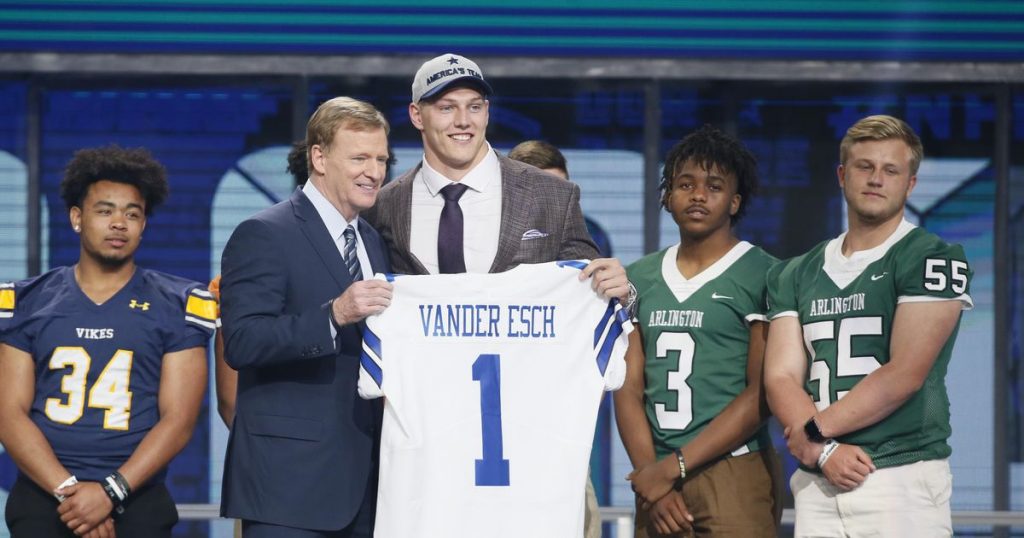 Dallas struck gold with Leighton Vander Esch in the NFL Draft first round last year. Can they duplicate their feat this year?

Everyone wants to know what the Dallas Cowboys will do. They will look to draft some help for running back Ezekiel Elliott, but they won’t do that during the NFL Draft first round. Their top pick will likely be an offensive lineman.

Other news in the NFC North:

The New York Giants were involved in speculation about trading with Arizona for the top pick, but that has apparently cooled. Expect Philadelphia to move up and grab one of the several edge rushers in this draft. Washington will look to add playmakers at the skill positions.

Other news in the AFC West:

The L.A. Chargers are very short on defensive linemen, so look for them to stock up. The Kansas City Chiefs drafted all defense last year. Look for them to seek offensive help this time around. Denver acquired Joe Flacco to be their quarterback, so perhaps John Elway will draft another tight end.

The Houston Texans have a great offense, at least when everyone is healthy. Unfortunately, Houston’s wide receivers have missed a ton of games. Look for them to get wideout help for dynamic quarterback Deshaun Watson.

Other news in the AFC South:

Tennessee loves big and powerful linemen who can bully defensive players. Jacksonville will try to find some receivers for new QB Nick Foles, but division foe Indianapolis is looking down the same aisle.

The Pittsburgh Steelers off-season turmoil just means more opportunities in the NFL Draft first round. However, some experts see the Steelers as a candidate to trade down and stockpile picks. Pittsburgh will look for dynamic offensive players to go along with JuJu Smith-Shuster outside.

Other news in the AFC North:

The Cleveland Browns are without a first-round pick, but they are calling incoming receiver Odell Beckham their top pick. Cincinnati needs help on both lines, and Baltimore needs defensive help.

The division that has been owned forever by New England will likely be owned again this year. That’s because New England is uber-skilled at this whole draft thingy. They will draft receivers throughout the draft, and these receivers will become better than anyone else’s receivers. That’s the way it will be as long as Bill Belichick and Tom Brady are together. (Gildshire thinks one or both are witches.)

Other news in the AFC East:

The Miami Dolphins love the quarterbacks in the draft. Oh, not this draft. The ‘Fins are in love with the QBs in the 2020 draft. Linemen are the target here. The Jets may well take pass rusher Quinnen Williams with the Number Three pick. Buffalo needs help on both lines.

That’s our look at the NFL Draft first round. Will there be surprises? Of course, there will be surprises. That’s what makes it a birthday cake. Enjoy the draft.