Hello again, football fans. The time change from Daylight Savings Time to Standard Time means a number of things. It means sunset is going to increasingly creep toward midafternoon. It means Christmas advertising will become overwhelming. Finally, it means the National Football League is entering the last half of the regular season. What do we know at the halfway mark? Is the NFL midseason picture becoming more clear, or just murkier? Where are the good surprises? Are there any epic fails? Gildshire’s Sport Magazine unpacks it all.

Pro: New York Jets: No one wants to be the subject of low expectations. “Oh, he will never amount to anything. He’s too (fill in the blank.) Sometimes, though, low expectations take the pressure off and allow a person, or group of persons, to flourish. They also make abject mediocrity look pretty good. Such is the case with the J.E.T.S. Jetsjetsjets. Accused in August of tanking the 2017 season to grab USC quarterback Sam Darnold, the New York Jets are a surprising 4-5 at the halfway mark of the season. Raise your hand if you expected the Jets to be just 1.5 games out of the final playoff spot this late in the year. Oh, put your hand down! You’re just as surprised as we are. 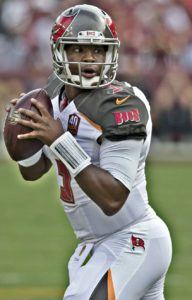 Con: Tampa Bay Buccaneers: There is an old saying that NFL quarterbacks take a big step forward during their third year in the league. The Tampa Bay Bucs wonder when the light will come on for third-year QB Jameis Winston. Drafted out of Florida State (where he had well-documented behavior issues) his new team believed the pro environment would provide a growth setting for the physically talented Winston. Instead, he has guided the team to a 2-6 record this year. Worse, his career winning percentage is .425, he is a veritable interception machine (which, candidly, he was in college, as well), and his sideline behavior against New Orleans led to a brawl.

Pro: Philadelphia Eagles: The Philly Cheesesteak gets more publicity than all other sandwiches combined. The Liberty Bell is the most-visited failure in Colonial history. Let’s face it, Philadelphia has more than it’s share of overhyped. Not so, with these Eagles. Picked to finish mid-pack in the NFC East, the NFL midseason report card gives them all A’s except for one A+ at quarterback. While the Dallas Cowboys get the oohs and ahhs from the sports commentators, Philadelphia is home to the NFL’s best team at the halfway mark.

Con: Atlanta Falcons: Every year one team loses the Super Bowl. That said, never in the history of Super Bowls has a team lost like the Falcons lost last year. Owners of a 28-3 lead as time ran down in the 3rd Quarter, Atlanta coughed up the lead and their chance at the Lombardi Trophy. Little wonder, then, that Super Bowl hangover led to a 4-4 record at this point in the following season. The players are, largely, the same as the best team in the National Football Conference this time last year. Psychologically, though, the Falcons are not the same. 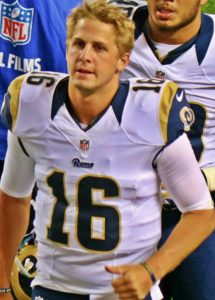 Pro: Los Angeles Rams: Last season, Rams quarterback Jared Goff sat the bench while other rookie quarterbacks guided their teams. Was Goff a bust, or was this a part of the master plan? The Rams’ 6-2 record, good for first place in the NFC West, suggests the latter. Moreover, in a league known for buttoned-down, make no mistakes, offense, the Rams are fun to watch! They throw the ball around and light up scoreboards. Defensively, they aren’t quite there yet, (8th in the conference) but offensively this team can motor.

Con: New York Giants: There are 1-7 records that can be explained away. Injuries, bad luck, bad calls, bad breaks. All can be explanations for a bad record. There is always a game, though, that tells the tale between explainable bad breaks and a bad football team. The Rams-Giants game, played Week Nine, was that game. Los Angeles ran and hid from the New York Giants, eventually winning 51-17. You just don’t see 51 points scored in an NFL game without something extraordinary taking place, and it did in this game played on the Giants home field. Big Blue quit. Can head Coach Ben McAdoo get his team back together and keep his job? That’s a big question as the NFL midseason becomes the second half of the season.

That’s our NFL midseason look at the league. Check again in about four weeks and we’ll break it down as the season heads down the homestretch. Until then, we hope your team does great…until they meet our team. Then we hope your team comes down with a painful rash.