Notes on Being Older Than the Speed Limit

Home » Healthy Lifestyle » Notes on Being Older Than the Speed Limit

How did this happen??? Aren’t K.C. and the Sunshine Band still cool??? Why did I get funny looks when I wore my bell-bottoms and my boss neck chains to Safeway??? Ban the Bomb baby. I need to burn my draft card. Where is that thing anyway? Ah, here it is, right under my AARP card. Sigh…

And yet, there are things about getting older that I will cherish. I got to have the iconic Farrah Fawcett poster in my dorm room.

And I got to drive a cool red Chevy Nova when it was new.

Mostly, though, I have gained some wisdom from having been born the same year as Liquid Paper. Here are things it has taken me 55+ years to learn.

1. There is no real penalty for removing the mattress tag.

They put those there so customers won’t use them as showroom Kleenex.

Stay in bed until the last possible minute. You’ll never have an original thought until 10:00 a.m. Before that, you’ll just be sucking down coffee and wishing you were in bed. Besides, if you go to bed early you miss the finest in educational televised entertainment. 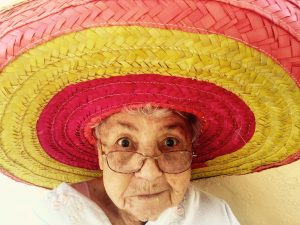 Notes on Being Older Than the Speed Limit

3. If a woman asks you to guess her age, miss low. MISS WAY LOW!

A lady at the grocery store asked me to guess her age. If I had been going, to be honest, I would have said 163. Instead, I said 44. It turns out she was 61. It did no harm to lie. She walked away with a spring in her step and I walked away full of the knowledge that I had gone one more day without being beaten to death with a loaf of French bread. Win-win. At my age, that’s the new goal.

4. The best ideas you have are the ones to which NOBODY will listen.

5. Karma is real and she ain’t playing around.

I was in the car with my girlfriend one time. We had just gotten something from the AM/PM. In juggling my car keys and my Pepsi, I spilled some Pepsi on myself. She called me a slob…and immediately dumped barbecued chicken on her blouse. Karma is your taskmistress and she will never leave you. So remember, when you fly the bird at the driver who cut you off, there is an excellent chance that your daughter will marry his son.

In parting let me offer some word of wisdom to the 69% of you who are younger than 55. Getting old is not for the faint of heart. But if your heart faints you won’t get old. Think about that one, whippersnapper!

Is the Covid-19 Pandemic Changing our Perception of Time?