Home » Uncategorized » The Odd History of The Oxford English Dictionary

It’s hard to imagine a time before dictionaries. The standard is the Oxford English Dictionary, which was dreamt up in 1857 by the Philological Society of London. There were dictionaries already, but they were incomplete and not very useful. The Society wanted a total transformation of language starting from Anglo-Saxon times. It wasn’t until 1879 that they reached an agreement with the Oxford University Press to create it. 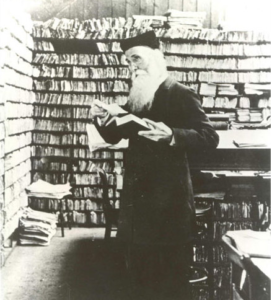 James Murray in his library

The man in charge? James A.H. Murray. The original goal was to complete the dictionary in 10 years, but after five, Murray and his team had only gotten up to the word “ant.” The project was much harder than they anticipated. Murray issued a request for volunteers to help. That’s how a man in an insane asylum got involved.

William C. Minor received a top-notch education and learned several languages as a child, but when he turned 13, he began suffering from persistent lustful thoughts towards women. It was apparently enough of a problem that his parents sent him to the United States, where he lived with his uncle in Connecticut. After becoming a doctor, he worked as a surgeon in the Union Army during the Civil War. His mental health continued to decline, and he began visiting prostitutes every night. After following orders to brand an Irish deserter, Minor began to believe he was being hunted and even poisoned by other Irish men. According to doctors today, Minor’s symptoms indicate he might have had paranoid schizophrenia. 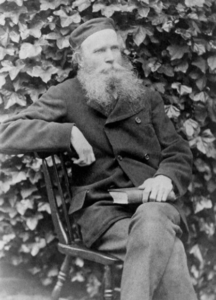 Minor in his later years

After the war, Minor moved to England in 1871. His mental health did not improve, however, and he ended up shooting and killing a stranger. He was sent to an asylum for the criminally insane. He was a very good patient, and felt extreme remorse for his crime. The victim’s wife even began visiting him, bringing him books, and some scholars believe they had a sexual relationship. Whatever the nature of their attachment, her gifts of books led to Minor hearing about the Oxford English Dictionary.

With nothing else to do, Minor spent the next two decades contributing to the project by providing words, illustrated definitions, and quotes from books. According to Murray, Minor provided at least 12,000 entries within just two years. When he went to visit him, Murray did not know his prized contributor was a patient. He was shocked to learn the truth, but viewed Minor as an intellectual equal. Minor died in 1920 at age 85, having led a life plagued by guilt and mental illness so severe, he castrated himself in 1902 in an attempt to stop hallucinations of sexually assaulting children.

One would think that Minor made the most contributions to the OED, but there’s actually someone else who provided more. Fitzedward Hall was a recluse in England after being expelled from the Philological Society, and spent at least four hours a day working on the dictionary. His job was to provide examples in books for words, and for the word “hand,” he offered more than 200 quotes. Murray wrote back to him and said he didn’t need to include so many, because there wasn’t space. 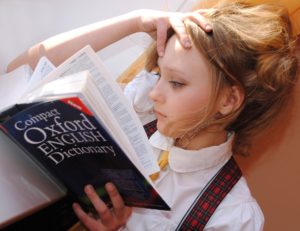 A young student reads her dictionary

The Oxford English Dictionary was first published in installments beginning in 1884. New versions continued to be updated, and in 1987, the first digitized version was released on CD. It cost over $13 million and took five years. In 2000, the Oxford English Dictionary Online became available, and can be accessed by subscribers. New words are added every quarter, with the most recent ones appearing September 2017. Words included: cheeselog, exoplanet, and fatberg. Expect to see another update in January!

There are a lot of words in the English language, but here are some that exist in other languages that we don’t have.