Ah, small-town life. The concerts in the park gazebo. The sack races during Rodeo Days. High school football games where everyone shows up. These are just a few reasons so many folks choose life in one of the thousands of small burgs that dot the map. Gildshire calls them “Mayberries,” and for good reason. They’re special places to call home. However, with the charm and beauty can come some interesting customs. We found some small town traditions that we can only call odd. Oh, that doesn’t mean we will avoid the towns, or even the traditions themselves. On the contrary, one of these oddities may make you want to pack a suitcase…or a U-Haul. Odd small town traditions are the order of the day and we’re sure you’ll enjoy what we found. 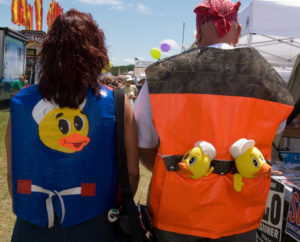 Two revelers on their way to something odd. They’re headed for the DuckTape Festival.

The Duck Tape Festival in Avon, Ohio. This town of just over 20,000 people a stone’s throw from Lake Erie hosts a summer festival each June. Costumes and crafts are the order of the day. Sounds like a similar gathering in your town, doesn’t it? Except, the crafts and costumes at this gathering are made of duct tape. (Don’t bother to tell the Avonians that it isn’t actually “Duck” tape. It will only expose you as an out-of-touch out-of-towner.)

The Nenana Ice Festival in Nenana, Alaska. Thousands of miles from Reno, Vegas, or Atlantic City an exciting wagering opportunity awaits those who like to put a little down in hopes of picking up something bigger. For over a century, locals have wagered on the time of the Tanana River thaw. Now, the bet has gone big time. You can mail in your prediction along with the $2.50 entry fee. The winners in 2017 shared a prize of about $267,000. That’s a portion of the bets, but the rest of the money goes toward charitable causes such as the Special Olympics of Alaska, public schools, senior centers, libraries and scholarship programs.

The Wisconsin State Cow Chip Throw in Prairie du Sac, Wisconsin. Midway between the state capital in Madison and the water slides in Wisconsin Dells, find Prairie du Sac, Wisconsin. Here, they throw poop. But, this isn’t a fly-by-night free-for-all. There are rules! No gloves allowed and you must release your fecal fling from the designated zone. If you break the record of 248 feet, you’ll be a local legend. 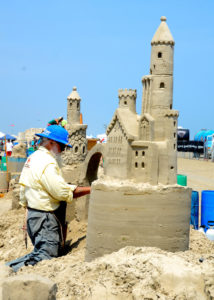 It was a hot day in Port Aransas, but this sand sculptor didn’t care.

The Texas Sandfest in Port Aransas, Texas. Across Corpus Christi Bay from Corpus Christi proper sits Port Aransas. Hard up against the Gulf of Mexico, Port Aransas has 4,054 population and billions of cubic feet of sand. Since 1997, sand sculptors flock to this beach town to construct. In the 21 years hence, music tents sprang up, a beer garden poured and a golf cart giveaway highlights the proceedings.

The UFO Festival in Roswell, New Mexico. What do we know for sure? In 1947, something large hit the ground near Roswell. The U.S. government backed and filled, dithered and obfuscated, eventually claiming the object was a weather balloon. The good folks of Roswell are having none of it! However, they also aren’t letting it get them down. Rather, they have a four-day UFO-themed party every summer. Guest speakers, UFOlogists, and authors speak at panel discussions. That isn’t the fun part.  The festival includes an alien costume contest, a UFO light parade, laser shows, and a 5K/10K run they call “Alien Chase.”

The World of Faeries Festival in South Elgin, Illinois. Each August, Old World-style entertainers, flautists, ventriloquists, storytellers, songstresses, and harpists gather in the meadow near South Elgin. There they tell stories and sing songs about the faeries. The falconing exhibitions are an annual festival highlight.

The Roadkill Cookoff in Marlinton, West Virginia. If you didn’t think we would finish with the oddest of the odd, then you don’t know Gildshire’s sense of the absurd. The Roadkill Cookoff is a cooking competition in which chefs compete to prepare roadkill in the most creative way possible. Fortunately, these are “virtual” kills. In other words, the preparations are animals “typically” killed on local highways. They weren’t “actually” killed on local highways…allegedly. The chefs who participate are invited in and paid $100 for participating. However, the winning chef takes home a check for $1200.

Does your town do something equally as odd? If so, let us know and we might show up at the next one. We will either be wearing an alien suit in New Mexico or be warming up our cow chip throwing arm in Wisconsin.