The Paranormal Mysteries of Crater Lake

It’s one of the most beautiful lakes in the world. At almost 2,000 feet, it’s the deepest body of water in the United States, and the 3rd deepest in the world. There are no rivers connected to it, so its waters come from rainwater and snow. This makes the water of Crater Lake so clear and pristine, you can fill your water bottle while every ray of light reflects off the surface like a mirror. 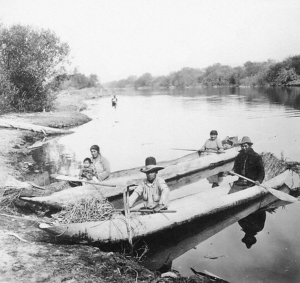 Members of the Klamath tribe, circa late 1800’s

In addition to all its beauty, Crater Lake is also surrounded by mystery and, to a certain degree, fear. Over 7,000 years ago, the volcano Mount Mazama erupted and collapsed, creating the crater. According to legends of the Klamath Indians, two great spirits were responsible for the lake’s birth. Llao, the spirit of the Below-World, ripped out the Above-World spirit’s heart, but Skell retaliated by decapitating his enemy. He threw Llao’s body parts in the crater, and brought down Mount Mazama to trap the evil spirit in Below-World. Skell then filled the lake with water. This makes the lake a special place, and for the Klamath, it’s too sacred to even look at the water too long. It is a doorway to Below-World, which is basically hell.

Since those days, the legends continue. The spirit of Skell is said to sometimes appears as a giant crayfish who drags people beneath the surface. When he gets upset, the weather becomes stormy. Another legend names Wizard Island as the place where souls of the damned live on in the form of winged salamanders. The Klamath undertook spirit quests to the lake in order to receive visions of the strange creatures. Another tribe, the Modoc, avoided the lake as much as possible, believing it to be cursed.

When the first white men came to the lake, the strangeness didn’t stop. It’s reported that in 1853 when John Hillam, a miner, came upon the lake, he spotted a white deer with pink eyes. Over the decades, there have been numerous disapp

earances, deaths, and sightings of weird creatures, like Bigfoot. One of the more disturbing stories took place in 1947, when a man and his wife went for a hike around the lake. When they reached a cliff, he gave his wife his wallet and casually stepped off. He broke his leg, but then proceeded to throw himself in the water and drown. When asked about it later, his wife said he appeared to be in a trance. 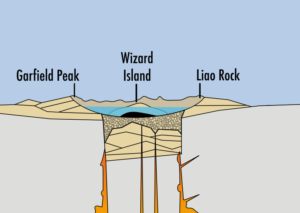 The truth of that story is debatable, but there are others that come from reliable sources. A ranger at Crater Lake National Park explains how she and her colleagues often see campfires burning on Wizard Lake. However, when they boat over there, there are no signs of campers or even scorch marks from a fire. Once, she saw a large group of people standing around a fire in an part of the forest where camping is illegal, so went over to confront them. However, when she got closer, there was no sign of them.

If spirits and monsters weren’t interesting enough, Crater Lake is also the setting for a lot of UFO sightings. These have included multiple UFOs in formations that fly over the lake, over the forest, and reports of UFOs actually coming out of the lake itself. For more info on Crater Lake, visit the official site. You’ll find updates on weather conditions, activities, and more.

Want to learn about another cool lake? Check out Lake Natron, which has water so acidic it can burn your skin!