The Patient Art of Stop-Motion Film

In 2009, studio Laika released its first feature into the world: Coraline. Based on Neil Gaiman’s dark children’s book, the film used stop-motion, with intricate details like hand-sewn sweaters created with knitting needles as thin as a hair. The film was a hit, and proved that as an art form, stop-motion was alive and well.

How does stop-motion work in action? It’s extremely difficult and even more time-consuming. For the film Anomalisa (not a Laika film), every 2 seconds of footage required 40-60 frames. Think about how a flip book works – every image needs to be slightly different, so when it actually runs, it shows motion. With movies, those images are made using puppets or other figures, and sets.

In less than ten years, Laika has become the studio for stop-motion. The name comes from the dog sent into space by the Soviet Union. Located in Oregon and owned by Phil Knight of Nike, the studio employs about 400 people and makes one movie every 2-3 years. Knight’s son Travis founded and runs the studio. Laika shot their first movie, Coraline, in 3D, which made the work even harder. It essentially meant doubling the number of shots they needed, each from a different angle. The 140,000-square-foot warehouse transformed into three mini Victorian mansions, 150 stages, and a 40-by-60 foot orchard. 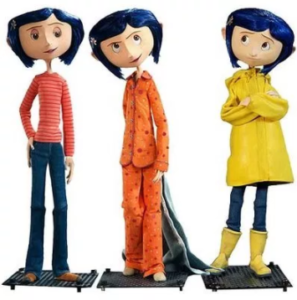 For stop-motion films, each character puppet is about ? the size of a human. For Kubo and The Two Strings, Laika’s latest film, each puppet wore handmade clothing and a rig that allows their faces to be switched out. Since each expression needs to be a separate face, one puppet will wear tens of thousands of different “masks” for one movie. Since the puppets are handled so much, there’s a whole team in charge of re-tightening the joints. Another department makes hundreds of tiny hands, because they’re so breakable.

Both characters and sets need to be flexible. Common set materials include foam and wood, and creators basically make puzzles with pieces that can be removed and fit back in quickly while filming. Trapdoors allow puppeteers to easily access characters and move them around. While most characters and sets are small, Kubo featured a Skeleton monster that stood 16-feet tall. It weighed 400 pounds, and needed a specially-robot to move it around. 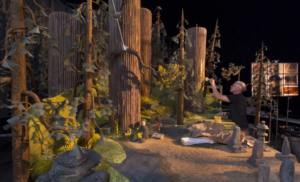 An artist painting a “Kubo” set

Kubo and the Two Strings was critically-acclaimed and paves the way for how future stop-motion will work. One of the newest innovations that Laika loves is 3D printing, which they used for the first time in 2012’s ParaNorman. This cuts down on painting time and lets workers print the hundreds of faces they need. Laika has also begun using more CGI, which some might think is “cheating.” However, stop-motion has always used digital effects to remove seams from characters. In Kubo, CGI helped the animators fill out crowds and create more realistic water.  The majority of work is still all practical and hands-on. So far, Laika has made four films: Coraline, ParaNorman, The Boxtrolls, and Kubo and the Two Strings.

What’s it like to work at a studio like Laika? In general, it’s just one animator per scene. This lets them work at their own pace. For Kubo, 27 animators worked independently, and created about three seconds of animation per week. It took about two years to complete the film. We don’t know what’s next for Laika, though IMDb lists an “Untitled Laika Project” for 2018.

Motion-capture is another cool innovation for film in recent years. What’s it like to be a mo-cap actor?

Chevy Employee Discount: Is it All That?