50 years ago, is when humans first stepped foot on the moon. In honor of the Apollo 11 spaceflight, Pierre Cardin: Future Fashion, an exhibition on the career of Cardin, opened at the Brooklyn Museum in New York and will be on display until January 5, 2020. With over 170 pieces from the 1950s to present, this retrospective showcases Cardin’s futuristic aesthetic and the influence it had on design concepts.

For over 70 years Cardin has been an active avant-garde designer. From clothing to jewelry to fragrances to furniture to architecture, Cardin’s work is ever-changing and innovative. As a young man growing up in France, Cardin worked for a local tailor. At 18, he left his home in hopes of becoming a couturier. He made his way to Vichy where he apprenticed for tailor Chez Manby and learned to cut, trace, and hand sew garments. Cardin’s learning was interrupted by World War II when he was called to service and joined the Red Cross. At the end of the war, Cardin decided to move to Paris. For six years he worked for various fashion companies and theaters, but in 1950 he launched his own company, Pierre Cardin, focusing on designing masks and costumes for theaters and masquerades. 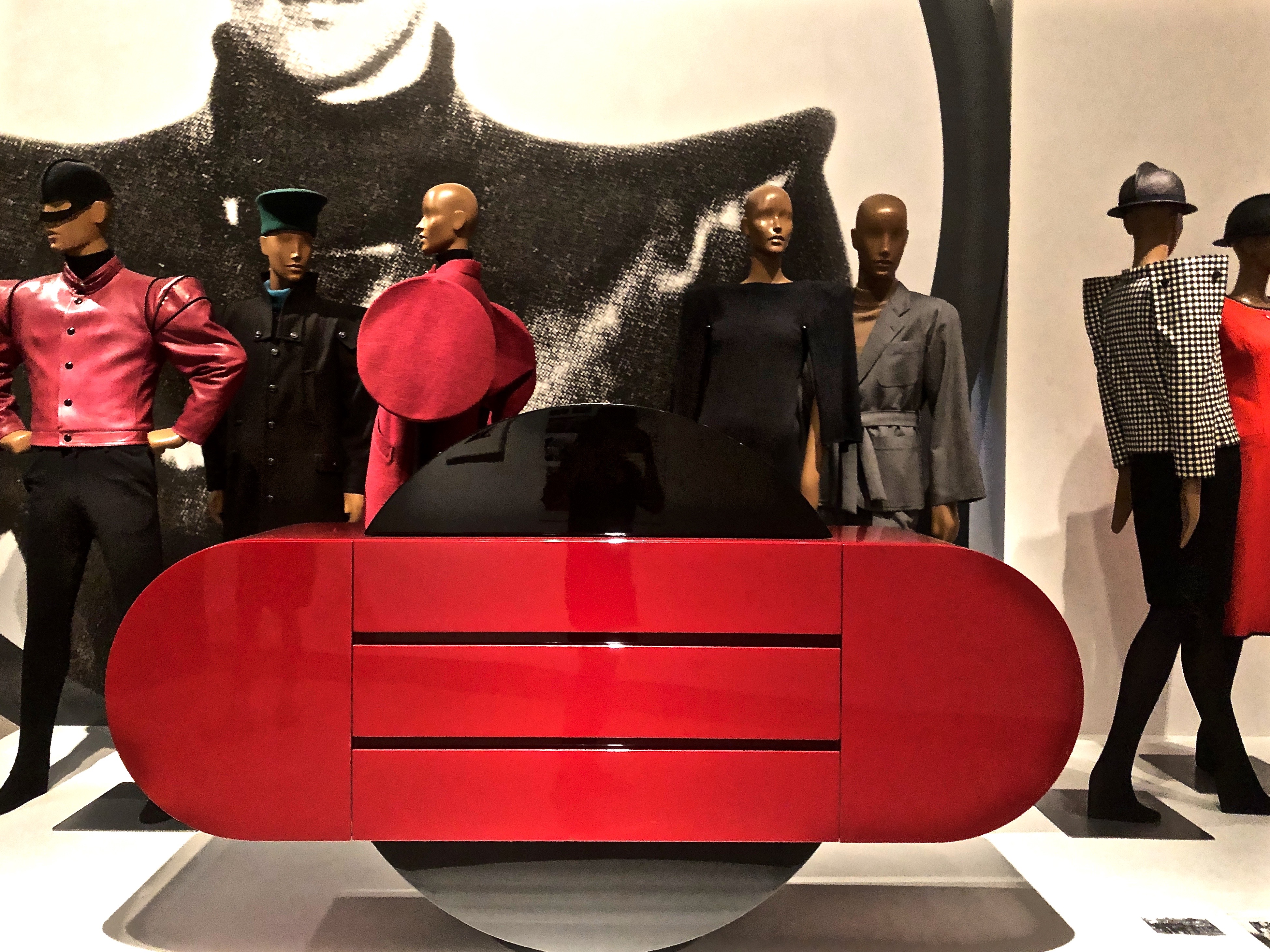 Within ten years Cardin was becoming world renowned with his one-of-a-kind designs. However, Cardin realized that he wanted to expand his designer wear to become something that more people could attain. With that in mind he launched his first ready-to-wear collection at Printemps department store in Paris in 1959. While he felt this an important move in his career and the fashion world as a whole, Cardin was ostracized because of it. Even so, not long after other couture designers followed suit, launching their own ready-to-wear collections.

Cardin’s designs are often geometrical in nature. He blends different shapes together to create outrageous designs, reimagining silhouettes and accessories. Some pieces do not emphasize the female form at all, while others highlight certain aspects. For example, the porthole dress, which is a two piece outfit that has plexiglass bubbles for breasts on the top.

He further his experimentation with designs by developing unisex clothing. He created is signature Cosmocorps line, which featured collarless suits, rolled collars, asymmetrical zippers, bodysuits, unitards, and jumpsuits. These last three items acted as a foundation for the outfit and could be customized (and gendered if one wished) by adding vests, skirts, jewelry, or other accessories to it. In the last decade Cardin worked on creating designs which have been referred to as “Cosmocorps 2019.” These new pieces consist of minidresses for women and long vests for men, both of similar lengths so that they appear unisex. 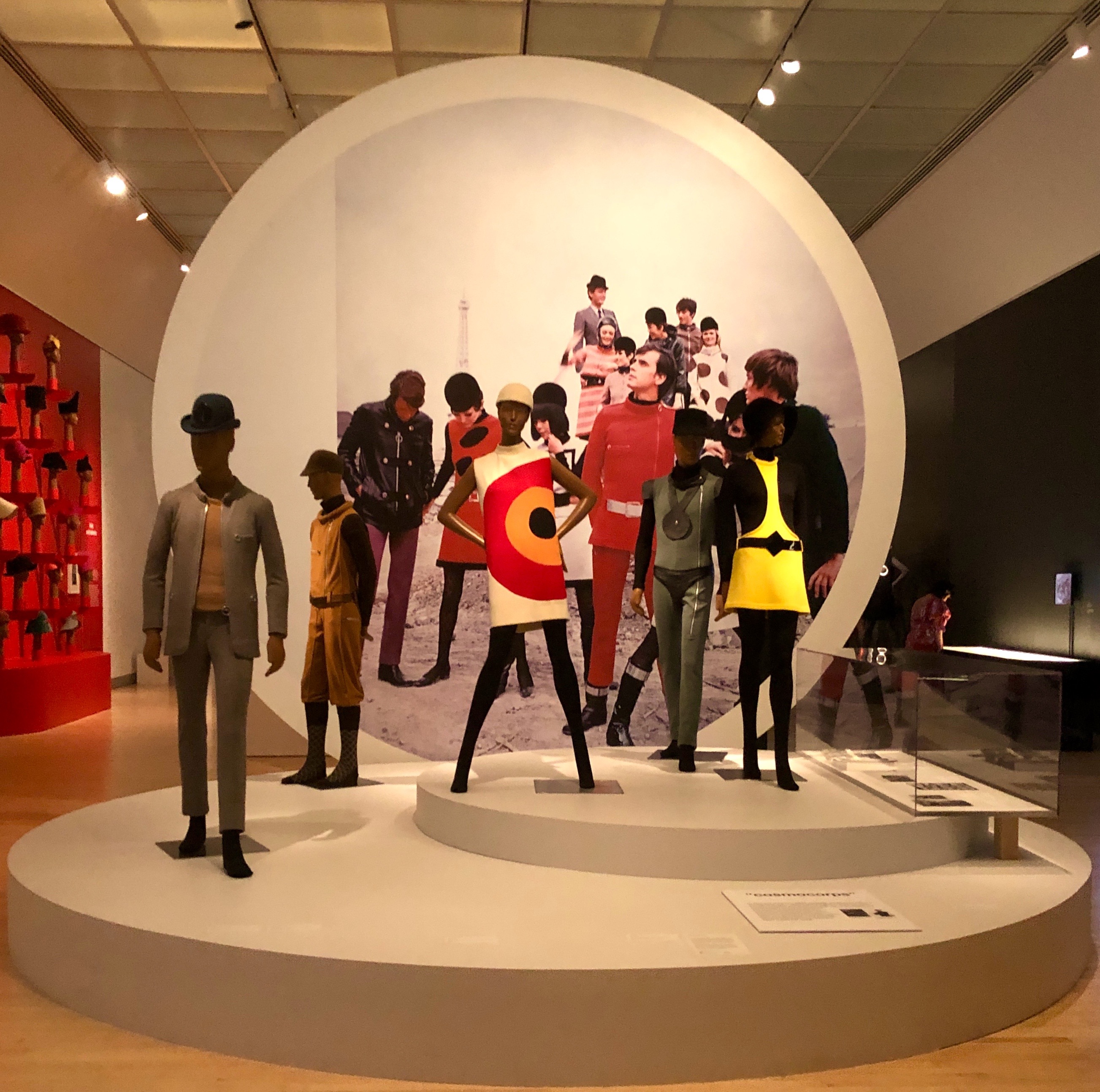 When it came time to actually design outfits for astronauts to wear in our space, Cardin had an opinion. his initial thoughts are fantastical and rooted in what was being shown in the media. For example, Star Trek was a very popular show that had outer space wear as something very similar to Cardin’s cosmocorps design. Once humans actually landed on the moon in gear designed by Space Age scientists and a visit to the National Aeronautics and Space Administration (NASA), Cardin realized that there were specific needs to what humans in space should wear. Cardin predicts that by 2069 humans will be walking on the moon or Mars wearing his Cosmocorps designs, but only time will tell.

Cardin has become more than just a clothing designer. His revolutionary ideas for furniture and houses as well has made him even more known. He gains inspiration from everything around him and never stops innovating. Each of his collections is an evidence of a fierce appetite for experimentation and while sometimes they are not always practical, they are truly impressive.

What Happens to Your Brain When You Binge-Watch?