Play it Loud: Instruments of Rock and Roll at the Metropolitan Museum of Art in New York City

The Beatles Set at the Play it Loud: Instruments of Rock and Roll Expo at the Metropolitan Museum of Art in New York City (Photo: Ceara Rossetti)

Play it Loud: Instruments of Rock and Roll is the first exhibition of a major museum to examine one of the most important artistic movements in history. Across culture and society, rock and roll influenced countless individuals. The Metropolitan Museum of Art in New York City created a display of the instruments that started it all.

Born in the American South, rock and roll was primarily played by black ensembles in the late 1940s to early 1950s. Rock and roll came together with hints of earlier musical genres such as piano and saxophone from R&B and boogie woogie, along with the acoustic guitars from country and western. Electric guitarists were inspired by Sister Rosetta Tharpe’s gospel music, electric blues of Muddy Waters, and Les Paul’s jazz and pop. Chuck Berry’s guitar solos changed the industry and spurred manufacturers to create new instruments and equipment to define the look and sound of rock and roll. The quintessential four-piece ensemble was reinforced by The Beatles’ electrifying appearance on The Ed Sullivan Show in 1964. 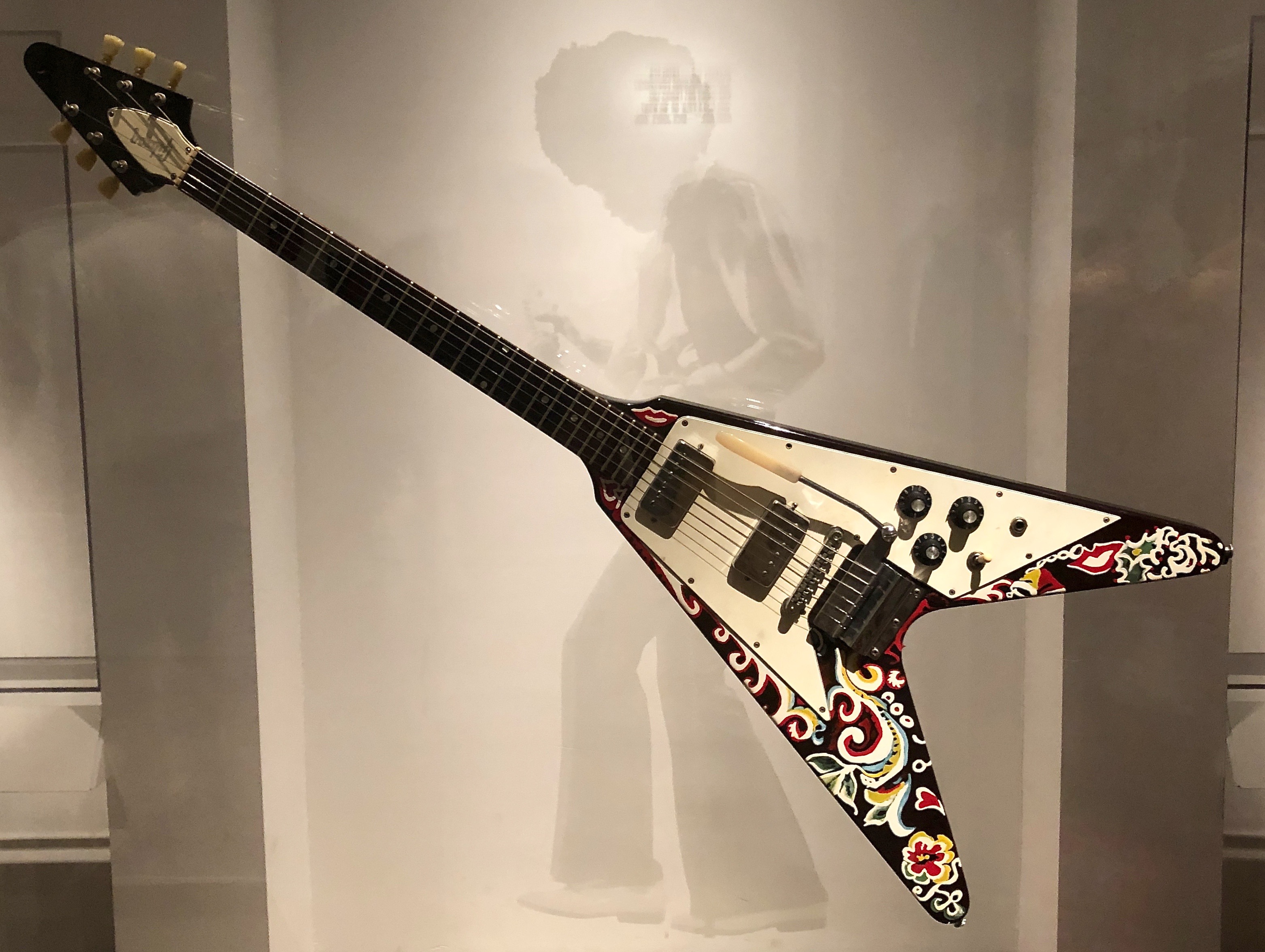 Jimi Hendrix Guitar at the Play it Loud: Instruments of Rock and Roll Expo at the Metropolitan Museum of Art in New York City (Photo: Ceara Rossetti)

Rock musicians took the idea of “loud” and rolled with it until it was not only the music that was loud, but their style and attitude embraced it as well. With that, the music influenced every corner of society from fashion to politics. The wail of the electric guitar and distortion of early amplifiers became the signature sound of rock and roll music. The piercing, pounding, vibrations that went right through the audience to command their attention.

Accompanying the electric guitar and amplifiers were pieces that comprised the rhythm section. It is the back beats of the drums and bass guitar that gives rock and roll the intensity it is known for. During the 1950s and ‘60s, drum sets became bigger and the acoustic double bass was replaced with an electric bass, thus allowing the music to grow louder and even more intense. A keyboard or extra guitar was added sometimes to better outline the harmonic structure of the music. Interestingly enough, oftentimes the musicians of the rhythm section were employed by the recording studio and not actual members of the band. The variety of sounds and subgenres allowed by the myriad of instruments enabled artists greater freedom in choosing the instruments and sounds they were comfortable with and liked best.

These instruments often became an extension of the artist playing them. Designed to perform both audibly and visually, they are used and cherished by those played them, as well as desired and loved by those who watch in awe. In time, manufacturers were able to customize guitars and keyboards into any shape the artist wanted. Prince’s “Love Symbol” guitar and Lady Gaga’s ARTPOP piano are prime examples of this. 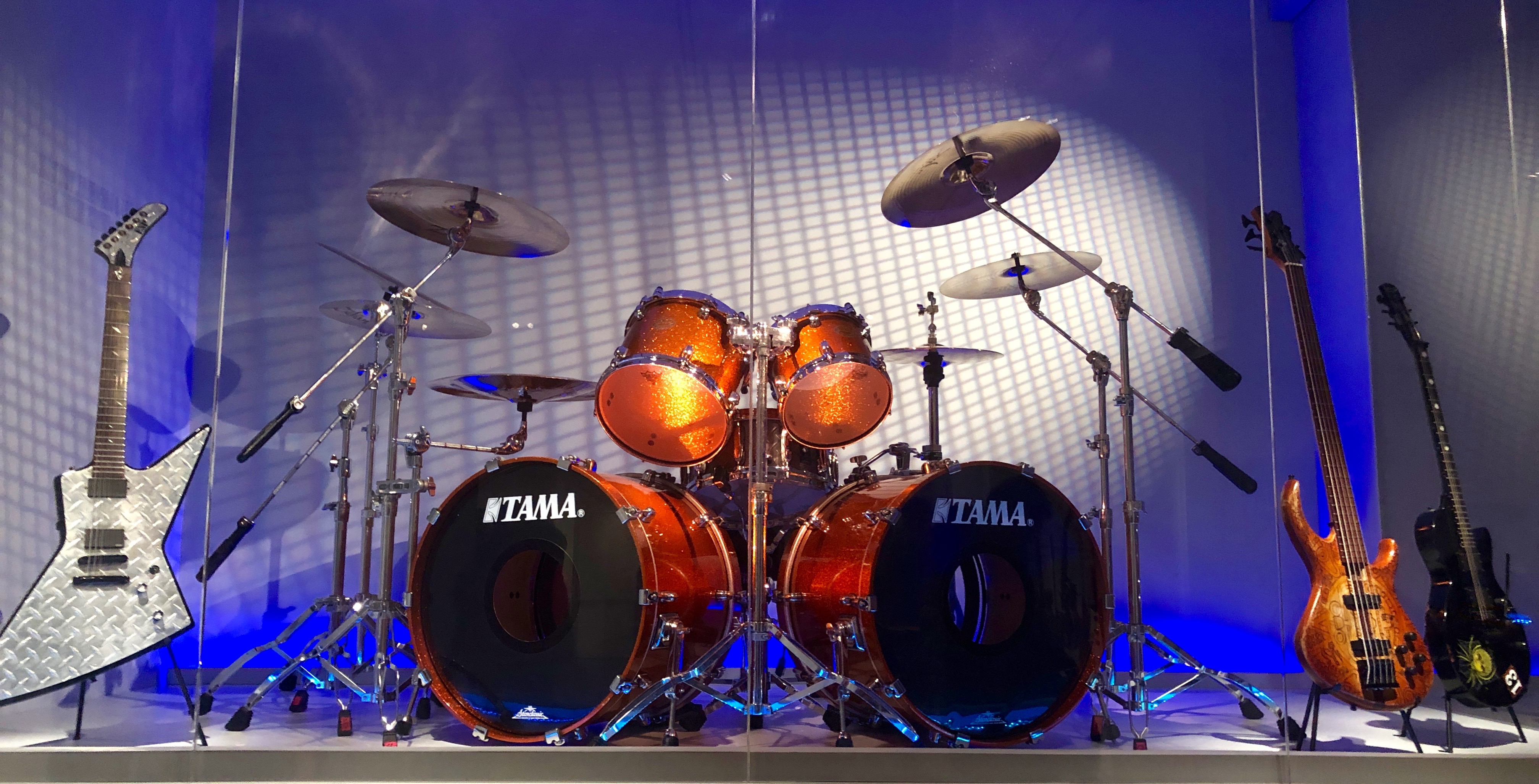 Metallica Set at the Play it Loud: Instruments of Rock and Roll Expo at the Metropolitan Museum of Art in New York City (Photo: Ceara Rossetti)

Walking through the gallery space, not only is the viewer gaining knowledge about the artists and instruments they have heard and appreciated, but they are also being wrapped up the rock and roll atmosphere. With low lighting and a playlist playing, the viewer is walking around as if they are at a concert (albeit a quieter concert). Curator Jayson Kerr Dobney created a whole playlist featuring songs such as Johnny B. Goode by Chuck Berry, Great Balls of Fire by Jerry Lee Lewis, Stairway to Heaven by Led Zeppelin, Hotel California by Eagles, and London Calling by the Clash. Many of the artists and bands are represented in the exhibition themselves.

Fans of rock and roll have been fascinated by the instruments and the musicians themselves. With help from the Rock & Roll Hall of Fame, the Metropolitan Museum of Art laid out the exact models and equipment used by the legendaries members of the musical genre. The exhibition will be open until October 1st, 2019 for all rock and roll fans to come and check out the instruments used by their idols.