Powerhouse: The Life Of Artemisia Gentileschi

She was the only female student of Caravaggio and the first woman accepted into the Florentine Academy of Fine Arts. Her work turns the tables on traditional portrayals of women from the Bible and infuses the stories with an unmistakable power. However, very few people know her name. Who was Artemisia Gentileschi?

Born in 1593 to a famous painter, Artemisia spent her young years helping her father Orazio in his studio. There, she fell in love with painting, but her father resisted. He even tried to send her away to a nunnery a few times, but then he finally realized that she had real talent. He hired another painter to tutor Artemisia. In 1612, this teacher raped Artemisia. Instead of staying quiet, Artemisia took the rapist to court.

During the trial, she was forced to undergo sibille, a method of “truth-finding” where her fingers were tied with rope that gradually tightened. After seven months, the teacher was found guilty. Whether or not he actually served time is unclear – one source said he never spent a day in jail, and the other said he was there for 8 months. Regardless, Artemisia moved to Florence, where she married a man her father picked for her.

While many women would have lived out the rest of their lives as a wife and mother, Artemisia was just getting started. She quickly earned the patronage of the duke of Medici. In 1616, she became the first woman accepted into the Florentine Academy of Fine Arts. Her paintings became very popular among royalty and scholars. Artemisia even became friends with Galileo.

After having two daughters, Artemisia and her husband separated. This gave Artemisia total authority over her household, and she traveled Italy with her daughters as her patronage grew. In 1641, she finally settled down in Naples. She died in 1953. While she enjoyed huge success during her lifetime, her name became obscured following her death. Many of her paintings were even inaccurately attributed to her father or Caravaggio. When her story was “rediscovered” centuries later, many scholars focused heavily on her rape, and not on her artistry.

The power of women

What kind of paintings did Artemisia create? They are so distinct, it seems hard to believe they could be credited to other artists. She painted her first known work at age 17. “Susanna and the Elders” tells the Biblical story of a woman subjected to lustful stares by a group of old men. Other artists around this time covered this subject, but Artemisia’s stands out because Susanna’s reaction is so strong. She’s frowning, disgusted, and holding her hands up. In other versions, Susana makes no effort to cover herself and her face is often blank. 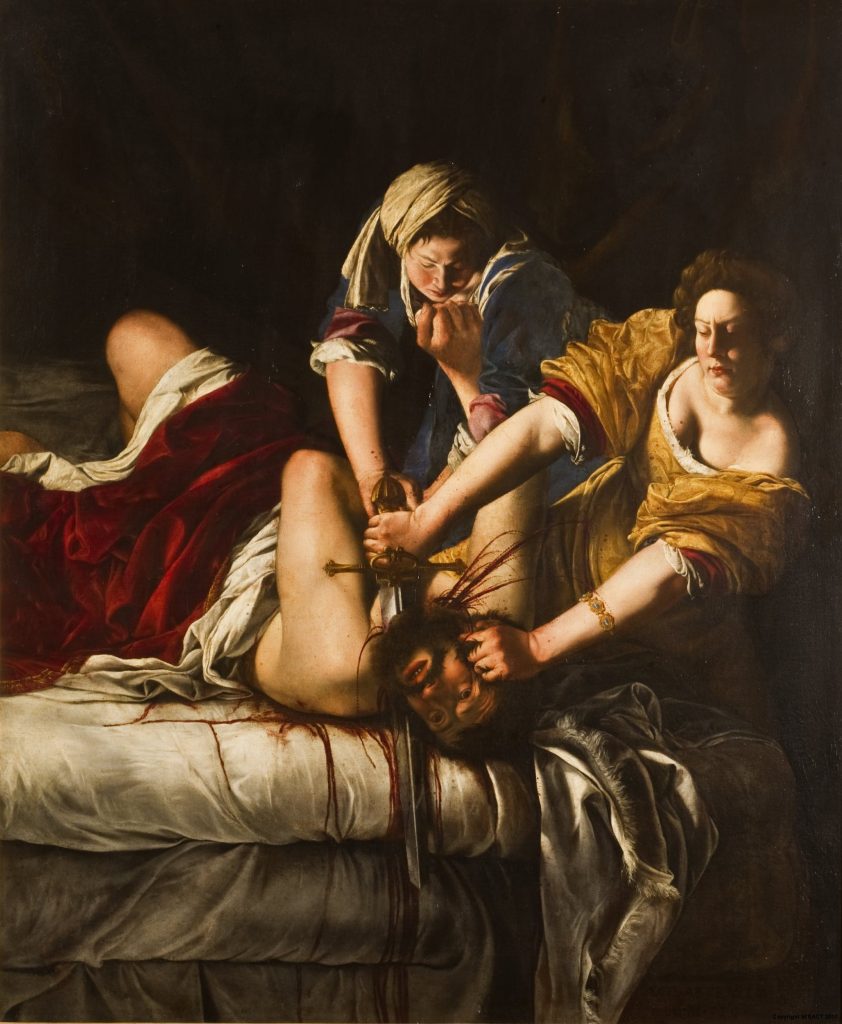 “Judith Beheading Holofernes.” From The Uffizi, painted in 1620

Artemisia’s most famous painting is much more violent. It tells the story of Judith, who lured an enemy general into her tent, waited till he fell asleep, and then cut off his head. It was a popular subject, but most paintings showed the aftermath, not the actual moment of execution. Artemisia chose to capture the full force of Judith’s anger in “Judith Beheading Holofernes.” The Biblical heroine shows no hesitation as she holds the man’s hair and saws through his neck. She looks cool and collected, her dress spotted with blood. There’s another woman with her, most likely a servant, who helps hold down Holofernes. She also looks determined, unfazed by the giant hand struggling next to her face.

As scholars begin paying more attention to female artists from the past, study of Artemisia is bound to continue. Just recently, a self-portrait was discovered beneath one of her paintings. Though long gone, this powerful artist is still telling stories.

Another woman who found unlikely success in her lifetime but is not well-known today: Mary Roberts Rinehart. She wrote crime stories.