Predictions for 2018 Across the Gildshire Mall of Magazines

Home » Uncategorized » Predictions for 2018 Across the Gildshire Mall of Magazines

Everyone is Nostradamus this time of year. Sages, pundits, and self-styled seers gaze into the murky crystal ball and take guesses as to what might take place in the New Year. However, not all predictions are created equal. Some of them aren’t worth your time. “There will be weather upheavals around the world.” You think? “Political unrest will plague the Middle East.” That’s news since forever. “The Cleveland Browns will lose 90% of their games.” Well, notify the media! “A major Hollywood couple will split up.” Yawning, now. Some predictions, though, are thought-provoking. Apparently, ancient texts predicted a blonde person would win the 2016 Presidential election. That was interesting, clear up until both nominees were blonde. So, today Gildshire gets into the predictions business. We’re making one prediction that will apply to each of our Mall of Magazines. The pressure is on because what’s in the cloud is forever.

Our predictions don’t include great Oscar success for Star Wars.

Art and Entertainment: Star Wars: The Last Jedi, will make a billion dollars a month for the next few months, but its cast will fall short when it comes to major awards. The latest Star Wars will win some technical awards, but major acting accolades will go to the likes of Sally Hawkins, for “The Shape of Water,” and Tom Hanks, for “The Post.”

Business: The stock market will make a significant correction (read that, fall) sometime during 2018. The Dow Jones Industrial Index can be expected to tumble 400-500 points in just a couple of days. By year’s end, however, the recovery will be well underway, if not complete.

Coming to a City Hall near you.

Cars and Motorcycles: A significant-sized American city will employ a fleet of all-electric vehicles before year’s end. A few years ago, a hybrid fleet would have seemed unlikely, but the automotive world is past that and is rushing headlong toward electric.

Family: The growth of social media will plateau in 2018, as families rediscover looking at one another. Oh, FaceTime and Instagram will dominate the youth demographic as they turn themselves into emojis for texting purposes. (Do you want to meet me in the lounge, yahhhh. Do you want to meet me at the club, yahhhh”) Young and older adults, though, will use social media somewhat less.

Fashion and Beauty: A riot of color will assault the eye during the year to come. Pastel outfits in the spring will give way to a Crayola box of brights come summer and fall. The bright colors will adorn head to toe.

Fitness and Health: Remember how we said that people were going to look at each other in 2018? That trend continues when it comes to fitness. The socialization aspect of fitness will rebound this year, as fewer people commune only with their iWatch and more people join fitness clubs. Some of those clubs will be virtual, i.e Peloton groups, but many will be in person. Fitbit use will wane, as well, as more people read the small print and discover that Fitbits aren’t completely accurate.

Food and Nutrition: Vegetable-forward dishes will become commonplace as veggies are taking their spot on-stage in traditionally carbohydrate places. Cauliflower mashed potatoes and zucchini pasta are up front now. The trend will continue. Look for a tea renaissance, as the Earl Grey lovers compete for space with coffee hounds. This will be fun to watch, as coffee has had it all to itself for a long time. Look for tea shops to compete with Starbucks. 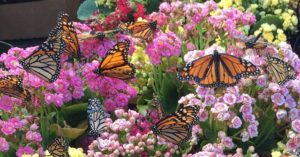 The butterflies asked me to thank you.

Home and Garden: Two gardening predictions can be expected to compete for priority this year. Luckily, they can be accomplished together. Gardeners have been slow to realize that the survival of the bee population may depend on them. With butterfly and bee numbers going down each year, gardeners are becoming more intentional about planting habitat for the struggling little souls. So, bee and butterfly gardens will dominate the spring and summer, while winter plants take over when the weather turns cold. Gone are the days of winter fallow. Instead, winter-flowering heathers and other colorful low-growing plants provide something for the eye while you’re sipping that hot cup of tea on a December morn.

Politics: The continued strength of the #metoo movement is going to have an impact when it comes to the 2018 midyear elections. A record number of women will run for House and Senate seats this year, looking to upset and unseat the men’s club.

Science and Technology: Heads up Display (or HUD). Learn it, and know it, because you will doubtless live it. Everyone from psychologists to chiropractors know that five hours a day with your neck bent, and staring at your phone is bad for you. Heads Up Display is becoming a common option for your car and it will soon be everywhere. It is a cousin of the unlamented Google Glass which only made everyone feel recorded and led to fistfights. Instead, your sunglasses will translate the street signs in Turin into English, and no one will get beat up.

Sport: The Cleveland Cavaliers and the Golden State Warriors have met in the last three NBA Finals. The Warriors (or, “Dubs”, as their fans call them) have won two of the three meetings with LeBron James and his Cavaliers. Will there be a fourth time around? We say, “Yes,” but it will be the last time these two get together, at least consecutively.

Travel and Nature: As the Millennial Generation takes hold of the workplace, vacation time is going to be spent in a different manner than how Boomers and Gen-X used their time off. For generations, workers looked forward to their two-week vacation in the summer. Millennials take a day here or there as they accrue them. Therefore, vacations in the future will be shorter and more frequent. The day trip will be the new trend, and long-term hotel occupancy will drop, as a result.

Those are our predictions for 2018. Do they go along with yours? Let’s walk hand-in-hand into the New Year and find out together.

Chevy Employee Discount: Is it All That?

Destination Hotels in the Mideastern Region of the U.S.