President Trump’s most tweeted State Of The Union Address

President Trump’s 2018 State of the Union address was well received by most Americans. According to a CBS poll, the speech was approved by 75% of Americans, 61% of the Independents and 43% of the Democrats liked it which is a very high percentage for Democrats.

Despite the fact Democrats criticized the President that he didn’t do enough to unite the country and heal the divide, 81% of the Americans in the poll thought the speech tried to unify and reach all Americans.

There were three main themes to President Trump’s State of the Union address: immigration, the economy, and foreign policy. 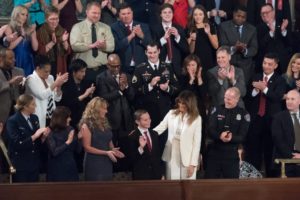 Immigration took up a good portion of the middle of President Trump’s speech, and for good reason: it has been talked about non-stop in the media ever since he nullified former President Obama’s executive order to protect children of illegal immigrants in September 2017. Congress is expected to vote on a comprehensive immigration plan in the coming weeks as well so it was an important topic for President Trump to include.

He revealed his administration’s immigration plan, with the two main (and controversial) aspects of it being amnesty for “dreamers” and merit-based immigration policies. It was a bold move for the President to include amnesty in his plan as Republicans (the majority of which voted him into office) are generally opposed to amnesty. However, it should also be pointed out that one of the loudest reactions of the night came when the President stated that “Americans are dreamers too” as a sort of an “in your face” moment to Democrats.

In a way, it shows something that many people have failed to realize up to this point: he is not a true Republican and doesn’t agree with all of their viewpoints. He is more willing to work with both sides of the aisle more so than the previous administration, and this is one example of what should turn out to be many more over the course of his presidency.

The President invited the Democrats to collaborate on immigration and infrastructure with a strong proposal of $1.3 Trillion that will be generated for the next decade with partnerships from federal, states and the private sector.

With such great numbers heading into the speech, the topic was all but certain to be included at some point, and President Trump spent a significant amount of time on it. Whether it was the 2.4 million jobs created over the past year, the tax reform plan, as well as companies coming back to the United States, the President played his card well.

The speech was conservative in tone, some of the commentators even mentioned that it was even more conservative than the past republican presidents. Donald Trump was no shy to emphasize he had a successful year and planned to continue throughout his presidency to make a positive impact and improve the state of the nation.

If there were any missed opportunities for President Trump it was (as Senator Bernie Sanders pointed out shortly after the address) his aversion to discussing the looming retirement crisis as many Americans facing retirement simply do not have enough money to do so. Senator Sanders may argue that pensions are needed to combat this, but President Trump did not provide anything in his speech on this particular topic, so it is difficult to gauge where he stands.  It is a crisis that needs to be addressed sooner rather than later. 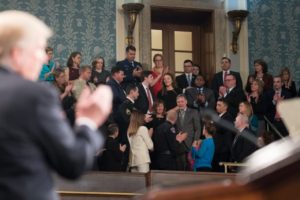 One of the most gripping moment of the speech came when President Trump spoke about Ji Seong-ho, a defector from North Korea who risked life and limb (literally losing his leg) to escape the regime. As Trump recognized him in the crowd, Seong-ho lifted up his crutches defiantly, humanizing what many in the American public seem to not care much about in regards to the North Korean regime. It was a great moment and one of the hallmarks of the speech, highlighting his reaffirming stance against North Korea as well as his aggressiveness in foreign policy matters.

President Trump, more so than the previous two administrations combined, has up to this point in his presidency, taken an aggressive stance in regards to foreign policy and continues to do so. He did not back down when dozens of countries voted to condemn the decision to name Jerusalem as Israel’s capital, and implied in his State of the Union address that perhaps America should reconsider all of the foreign aid it is giving to countries who do not align with the nation’s interests.

There have been many uplifting moments, like when the President talked about the Flag, Anthem, the historic lowest unemployment for the Black and Latino communities. The Democrats missed an important opportunity instead of sitting down looking gloomy, to stand up and cheer for the American people.

The Democrats should be careful how much they will push their “resist attitude” as people are starting to feel the improvement of a booming economy in their pockets.

Throughout the speech he introduced his guests with powerful examples of basic selfless humanity that was very humbling and uplifting, celebrating the forgotten men and women of this great nation.

Overall, President Trump’s State of the Union address was pragmatic in its scope and should certainly have teeth in the year to come.

Donald TrumpGOPState of the Union

Pay with a Selfie