Home » Kickoff 2019: Questions Facing the Teams in the NFC South

The people who were there will never forget it. For thousands of football fans in the Greater New Orleans area, the moment was one of those “Where were you when…” occasions. For those who aren’t from the Bayou State, let me set the scene, while those who are can skip ahead. Late in the 2019 NFC Championship Game, Saints’ quarterback Drew Brees was leading his team for the go-ahead score and a probable berth in the Super Bowl. Brees lofted a pass down the right sideline toward Tommylee Lewis. Rams’ defensive back Nickell Robey-Coleman hit Lewis well before the ball arrived. Pass interference? Not one flag from an official. Incomplete pass, and play on, Rams to the Super Bowl. Why would Gildshire revisit a non-call when talking about questions facing the teams in the NFC South? 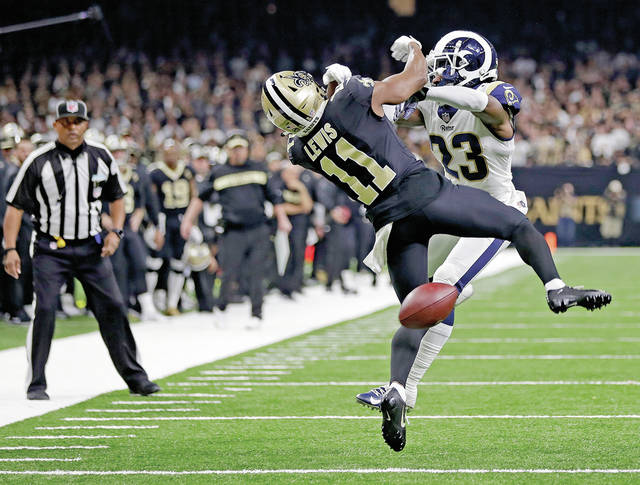 This play, from last year, creates questions for the teams in the NFC South. How will the Saints respond?

Because, how the Saints react to the past and play in the future may be the biggest question in football as we enter the new season. Will they open the season with revenge in their eyes? Or, will they suffer from unfairness hangover? The answer to that question will go a long way toward deciding what happens in this competitive division. Brees is getting long in the tooth, but he has at least one more productive year in his body. If he is to capture his second ring, the past must be put in the past.

Falcons’ quarterback Matt Ryan is a good one. He can be a great one when he has a solid running game to support his passes. The Falcons dearly missed runner DeVonte Freeman last year. Can he come back at full speed, or will the burden be on Ryan one more time?

Quarterback Cam Newton is coming off of not one, but two shoulder surgeries. Naturally, the big questions in camp was, “How is Cam’s shoulder?” Then, during a preseason game against New England, Newton tweaked an ankle. “How is Cam’s ankle?” The Panthers have the horses to make a deep playoff run, if Newton is healthy. If he is not, they do not. It really is as simple as that.

In the last year of his rookie contract, Bucs’ quarterback Jameis Winston is at a crossroads. Up and down play on the field, and questionable off-field behavior have some Tampa Bay fans ready to move on. Others say, “Look at his arm. Can’t you see the potential?” If Winston keeps his head in the game and his name off the police blotter, he may earn a new deal. If he doesn’t, the Buccaneers will be in the market for a new quarterback in next year’s draft. Mr. Winston, this is your last chance! Tampa Bay brought in noted quarterback whisperer Bruce Arians to try and talk sense into the young man.

Those are the questions facing the teams in the NFC South. The season is almost upon us, friends! We are ready for some football.