Deaths of Multiple Racehorses Cause Shutdown at Santa Anita

Santa Anita Park is one of the iconic racetracks in North America. The host track for a record ten Breeder’s Cups the Arcadia, California oval is home to some of the biggest races run each season. Unfortunately, there has occurred a startling number of deaths by the horses who train and race there. Twenty-one equine athletes have perished at Santa Anita this year alone. As a result, racing is suspended for the foreseeable future, and track officials have committed to re-examining the dirt surface.

Tim Ritvo, COO of Stronach Group, the owners of Santa Anita, reports that the San Felipe Stakes and the Santa Anita Handicap for older horses will not be run at their scheduled times. Those are big races in the grand scheme of things in the horse race world, and the sport’s authorities will attempt to reschedule them at a later date, if possible.

But, the horses are the concern

The greater concern, of course, is what’s going on with the horses and why are they breaking down to the point of being euthanized? Is it the track? The extraordinary rain in the L.A.-area this winter? Something else unrelated to either of those two? These are the questions track and racing officials are deep-diving into for answers.

Arcadia received over 11 inches of rain in February, and the rain was accompanied by extremely (for Los Angeles anyway) cold temperatures. But it’s unclear if cold and wet track conditions played a role in the fatalities. At least one owner believes they did contribute.

Her name is Debbie McAnally, the owner of Let’s Light the Way, the filly put down Tuesday afternoon. Legendary trainer Ron McAnally (Debbie’s husband) said the 4-year-old filly “took a bad step or something,” and suffered the injury. Mr. McAnally went on to say that “the injury was a shattered sesamoid in her right front leg. Sesamoid bones provide anchor points for the two branches of the suspensory ligament. The bones are under stress each time a horse takes a step. “Lets Light the Way was X-rayed and later euthanized.

Debbie McAnally did not mince words. “I think the weather has a lot to do with it. “Santa Anita has been a wonderful track, and they’ve done all kinds of tests. I don’t know what else they could do.” 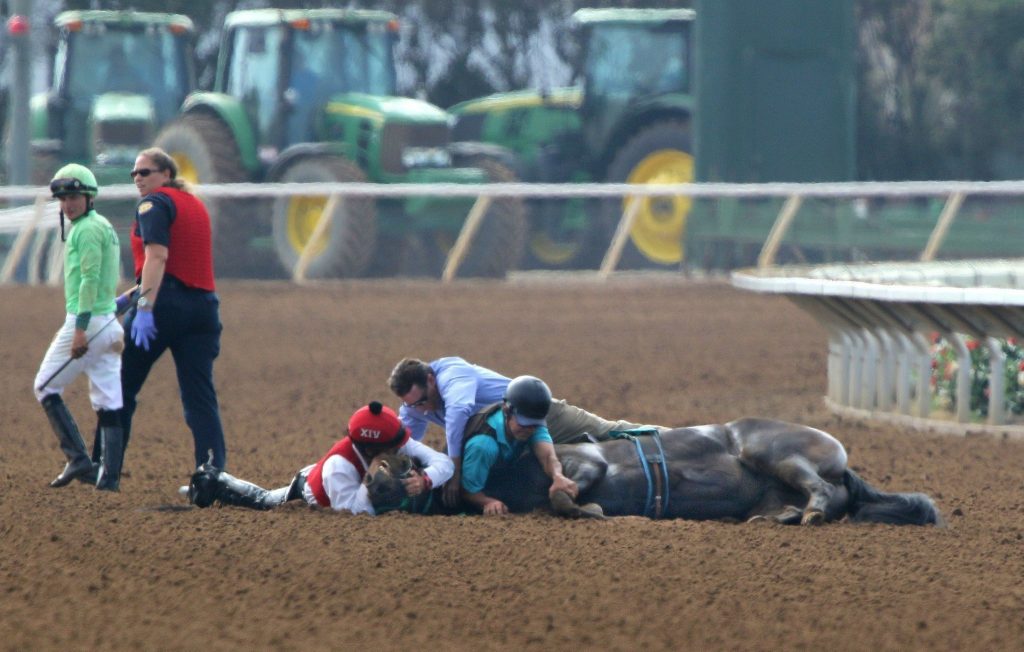 This kind of scene is all too familiar at Santa Anita Park.

Animal rights groups are in play

The ongoing equine tragedy at Santa Anita caught the attention of more than just horse racing enthusiasts. A group of animal-rights activists came to the track’s main gate earlier this week. They were carrying signs and loudly shouting their disapproval of everything having to do with the sport.

Responding, though, to the current situation, PETA President Ingrid Newkirk expressed agreement with Santa Anita’s decision to close for now. She added some thoughts about medications the horses take to be able to perform.

“The track should remain closed until the California Horse Racing Board dumps the drugs entirely, or injured horses whose soreness is masked by legally allowed medication will continue to sustain shattered bones. PETA calls for a criminal investigation into the trainers and veterinarians who put injured horses on the track, leading to their deaths.”

Gildshire will stay atop this developing story. For the sake of the fans of the sport, but mostly the athletes who make it happen, we want solutions, and we are not alone.