Ranking the Star Wars Movies From 8 to 1

The weekend of Dec. 20-22, 2019. marked a bellwether spot in movie history. The release of the final Star Wars movie ends a journey that began before Ronald Reagan went to Washington, the Macarena went viral, and Eastern Airlines went bankrupt. It was a simpler time for most of us, but those simpler times were rent in two by the May 25, 1977 release of the first Star Wars movie. George Lucas’ masterpiece turned science fiction on its ear with never before seen technical advances and a decent plot. Later, of course, the first Star Wars movie became “Episode Four: A New Hope,” as Lucas decided to go back before he went forward. Some of us said, “The first is now the fourth? How is this possible?” He’s George Lucas, and as such, is forgiven. What better time, though, for ranking the Star Wars movies from worst to first?

#8. Episode One: The Phantom Menace

We do not anticipate any blowback on this one, as most moviegoers recall it as a snore if they recall it at all. The moviemakers were limited, in that nine-year-old Anakin was the main character. John Williams’ score didn’t disappoint, but the tame action certainly did.

#7. Episode Two: Attack of the Clones

Ewan McGregor fit nicely into the Obi-Wan Kenobi role, and the movie focuses on his storyline, That is the best thing about this movie. Lucas does give us the beginning of the Clone Wars, featuring Yoda in a lightsaber battle. However, the painful Anakin/Padmé Amidala storyline dragged this one down. It is a much better movie than “The Phantom Menace,” but that is a low bar to clear.

We rank this one ahead of “Attack of the Clones” for its stunning visual effects. Otherwise, it felt like we were watching another episode of “Indiana Jones.” That isn’t a bad thing, but it was jarring when we sat down with our tub of popcorn, ready for a Star Wars experience. That’s why we separated it out from the episodes before and after.

#6 Episode Three: Revenge of the Sith

Certainly, the darkest of the prequels, as Anakin goes rogue, and Padme’ dies after giving birth to the twins. As is so often the case, the battle at the end (between Skywalker and Kenobi) was the best part and well worth the wait.

#5. Episode Six: Return of the Jedi

The final entry of the original trilogy. It does what we needed it to do, by closing that chapter. It answered the important Star Wars questions and stands alone against the Disney episodes down the line. Am I alone, though, in being bummed by Boba Fett’s death…and in the first 20 minutes?

“The Force Awakens” is a wonderful combination of new and old. We thought it did a great job of celebrating the franchise to date while laying a solid foundation for the future.

Rian Johnson directed this one, and fans of the series wondered if he would be up to the task. As it turned out, he did a good job. His choice to deep dive into the whole Jedi ethos was a good one, and one that educated as much as it entertained.

The Genesis of it all. Devotees will tell you that there is no denying the awesomeness of the original “Star Wars” movie. George Lucas’ vision of the visual and the original score in harmony changed moviemaking! He also changed everyone’s perception of the sequel when he made…

#1 The Empire Strikes Back 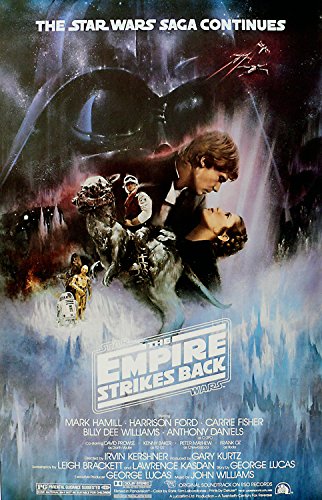 Everyone knows that there couldn’t have been nine installments of the Star Wars saga based on A New Hope alone. The story needed to be deeper, and with more layers, if there was to be a movie series that would span four decades in the making and pull in generations of watchers. The Empire Strikes Back does that, and stands the test of time even if listed as the fifth of nine.

Beginning the weekend of Dec. 20-22 together, you and Gildshire will learn where Episode Nine falls in ranking the Star Wars movie. Let’s go see it together, and say goodbye to the celluloid story that is…Star Wars.

How to Surprise Your Girlfriend with Your Romantic Deeds