The Real Sword in the Stone

Home » Travel & Nature » The Real Sword in the Stone

Tuscany, Italy – Known for its gorgeous scenery and prominence in books like Under the Tuscan Sun, it may also be the inspiration for the Arthurian legend of the sword in the stone. In a little chapel with no roof, surrounded by vineyards, there’s a stone with a sword lodged deep into its core. The legend of this sword, however, is about how it got to be there in the first place, and not who will remove it. 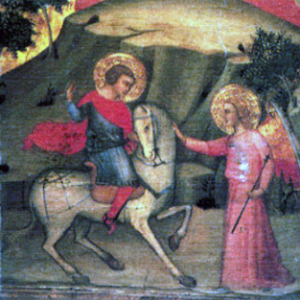 In 1148, Galgano Guidotti was born. He grew up to a knight, and abused his power and wealth. When he turned 32, he had a change of heart and decided to abandon his former life to become a Christian hermit. According to records kept by the Catholic Church, the Archangel Michael appeared to him in a vision and led him to Christ. The next morning, Galgano moved to a cave.

One day while he was out riding, he was led to the foot of a hill and had another vision, this time of a round chapel with Jesus, Mary, and the 12 Apostles. A voice told Galgano to climb the hill and once he reached the top, it instructed him to renounce all his worldly desires. While he seemed to have been on board about being a hermit, this part overwhelmed Galgano. He said it would be as “easy as splitting stones with a sword.” He took out his sword and struck a nearby stone. To his shock, the sword cut straight the stone and stuck there.

Convinced, Galgano stayed at the hill, which was called Montesiepi. When he died, he was buried there, and a round church like the one he had seen in his vision, was built there. Pilgrims flocked to the location to see the sword. Various miracles were also supposedly witnessed there, including the fact that after his death, Galgano continued to grow curly blonde hair.

There’s another legend where a thief once tried to take the sword from the sword, and was attacked by wolves. His hands were mummified and placed by the sword as a warning. There’s another version of the story where Galgano wasn’t not dead yet, and the thief was an assassin disguised as a monk. His fate of being killed by wolves and his hands mummified remains the same. We know these stories about Galgano and his sword because only a few years after his death, the Catholic Church made him a saint. He is the first saint to go through a formal process, and records contain sworn witness testimonies and records of his miracles. 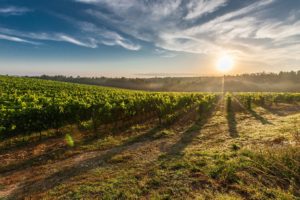 One of Tuscany’s gorgeous vineyards

Of course, that’s not enough to convince most people of the truth of the story, and for years, people assumed the sword in the stone had been faked. In 2001, researchers used ground-penetrating radar to learn more. They discovered a cavity beneath the sword that could contain a body, and confirmed that the sword’s metal and style are consistent with the time of Galgano. The mummified hands were also tested, and also proven to be from the 12th century.

If you want to visit the chapel, it isn’t hard as it remains a popular tourist location. The grapevines that grow in front of the Galgano abbey (which is near the sword chapel) make Galgano Montesiepi wine. You’ll see the sword and mummified hands safely behind a plastic screen.

Another chapel with a history is the Holy Trinity Church in England, where researchers recently confirmed a legend that one of the graveyard’s famous inhabitants – William Shakespeare – is missing his skull.

America’s Best Main Streets (and a bite to eat)

Tiny Houses: Three Pros, Two Cons, And Is One For You?