We used to say famous deaths came in sets of three, but this year seems to have surpassed that number. As we remain in a state of near-lockdown in most states, we grieve to know that, “A-wop-bop–a–loo-bop, A-lop-bam-boom!” has been silenced. Little Richard died May 9, 2020, in Nashville, after a two-year battle with bone cancer. Today, Gildshire is remembering Little Richard. He was 87 years old when he passed.

Richard Wayne Penniman was born in Macon, Georgia, on December 5, 1932. He was the third oldest of twelve children born to Bud and Leva Mae (Stewart) Penniman. Bud made a living selling ‘shine and rejected his son when Richard began to display signs of homosexuality. Bud threw Richard out of the house when the young man was only thirteen.

From that point on, Richard’s early life was shaped by his church. His grandfather and two uncles were gospel preachers. Richard sang gospel songs during worship services and learned to the piano in church, as well.

As a teen, Richard was sheltered by a white family who owned the club in town, where Richard began performing.

At the age of eighteen, Richard’s performance on an Atlanta radio station earned the young man a contract with RCA. But, at first, Richard’s career faltered. 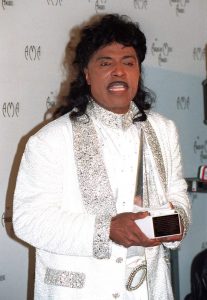 Three years later, Richard met Art Rupe, who was a producer at Specialty Records. Rupe was looking for a piano-pounding front-man to play for a New Orleans jazz and rock-and-roll group. In September of 1955, at the age of 24, Richard recorded “Tutti Frutti.” It was an instant Billboard hit, Number Seventeen on the pop chart.

That was to be but the beginning. In the next eighteen months, Richard cut several more hits. These included Good Golly, Miss Molly, Long, Tall Sally, and Send Me Some Lovin’. His blood-pumping piano and playfully suggestive lyrics became Little Richard’s musical style for most of his career.

Little Richard also appeared in early rock and roll films. These included Don’t Knock the Rock in 1956, and Mister Rock and Roll, and The Girl Can’t Help It in 1957.

Gospel Music and Return to Rock

With fame came inner conflict. Little Richard’s earlier connection to the church begat doubts about rock and roll. In 1957 he publicly announced that he was not going to play rock and roll songs. He immediately committed himself to the gospel ministry and gospel songs. In 1959, he produced his debut Christian album, God Is Real.

As is the case with so many entertainers. Little Richard struggled with drug and alcohol addiction during portions of his career. At first, a teetotaller who fined band members for imbibing, later Richard confessed that he should have been named “Little Cocaine” for his addiction to that drug.

Little Richard was an original inductee into the prestigious Rock and Roll Hall of Fame in Cleveland. In 1993, he received the Lifetime Achievement Award from the National Academy of Recording Arts and Sciences. A year later, the Rhythm & Blues Foundation honored him with the Pioneer Award.

In his later years, Little Richard almost completely stopped performing. He became ill during a 2012 concert in Washington, D.C. In 2013, he suffered a heart attack. His doctor credited low dose aspirin with saving his life. But Little Richard gave credit to a higher power.

“Jesus had something for me. He brought me through.”

Such words of faith are common when we reach our later years. Today, Gildshire honors those words as we set about remembering Little Richard.

What Can We Expect From Life After Lockdown?