Welcome to the Sunshine State of Florida! It draws our interest as stop Number Two on our Greatest Road Trip Ever Taken. Florida, with almost 20 million residents is the third most populous state behind California and Texas. There, we’ve already surprised you. Florida has just a handful more people than does New York.

The State Capital of Florida is Tallahassee. The largest city is Jacksonville, and the largest Metro area is Miami. Tampa ranks third in city size. Other cities with populations exceeding 100,000 include: 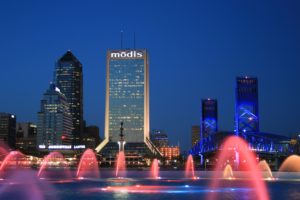 You have noticed by now that this isn’t Alaska. In fact, with this many folks in a state that ranks 22nd in land mass, Florida is one of the quintessentially urban states on our trip.

Florida became the 27th state in the Union March 3, 1845. Just how it became a state is an interesting tale. Until 1810, Spain owned all of what is currently Florida. That’s when President James Madison said otherwise. First, he claimed the panhandle to be a part of the Louisiana Purchase. Later, when Spain struggled to control immigration, the Spanish government ceded the territory to the U.S.A.

Florida is the southernmost state in the contiguous 48 and the easternmost, as well. That said, most of Florida doesn’t feel as “southern” as Georgia, Alabama, Mississippi, etc. Nor is it as quintessentially “eastern” as its Atlantic neighbors on I-95. Due to its heavy influx of imports and transplants from other states, Florida is its own melting pot. The varying preferences, traditions, ethnicities, and even accents make it a delightful place to watch folks and listen to them tell their stories.

Floridians resist labels such as rural, urban, liberal, conservative, etc. They say, “We’re Florida, y’all (at least up north) come down and see us for yourself.”

The Plains states are renowned for being flat, but Florida knows flat! The highest point in the state is high atop towering (?) Britton Hill…345 feet above sea level. The lowest point is hundreds of sea level miles along the Atlantic and Gulf coasts. The geographic center of Florida is a mile north of Edgewood on the shores of Tower Lake.

Most of Florida is in the Eastern Time Zone. The portion of the panhandle west of the Apalachicola River is in the Central Time Zone. All of Florida observes Daylight Savings Time. 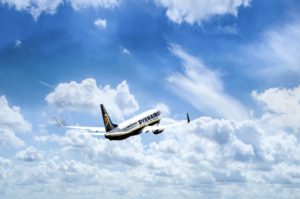 Tampa International enplanes a little over 13 million passengers annually. Many of them go to Atlanta.

Just over 16 million travelers a year start or end their flights at Miami International. New York is the most common destination.

Weird and Wonderful Facts about Florida:

Ponce de Leon named Florida when he led the first European expedition to the peninsula. He was in search of the Fountain of Youth.

Sunscreen was invented in Florida. While not the Fountain of Youth, it does help. It was first made in a chemist’s coffee pot when he ground up cocoa butter until it turned into a semi-liquid. *Our Supposition* The coffee pot never made a decent cuppa joe after that. 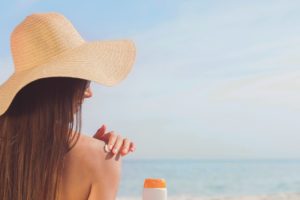 Gatorade was named for the mascot of the University of Florida where the drink was developed. It was a way to help football players’ stamina in the hot Florida sun.

The official state gem of Florida is the moonstone. Alas, the moonstone is neither from the moon or native to Florida.

Fort Lauderdale is nicknamed the Venice of America. That’s because of its 185 miles of waterway.

Let’s Take a Trip Through Florida:

Oh, you’re up already. Something tells me you know there’s a theme park on this trip. Well, let’s go. We’re going to cover over 700 miles on this trip. Pack accordingly.

We start our trip in Key West. This is Ernest Hemingway’s home and the playground to Presidents Truman, Kennedy, and Johnson. In fact, Hemingway’s home is our first stop. We will learn about this complex man and enjoy a colorful history lesson of Key West. Ernest Hemingway penned most of his greatest work while residing in this tranquil home. We step back in time with a stroll through the tropical gardens where one of America’s greatest authors created a unique legacy. After our informative tour of the great man’s abode, we will go to the Southernmost Point in the Continental United States, just because we can.

Our next stop is South Beach. To get there, we travel on one of America’s greatest roadways. The Overseas Highway is 113 miles of highway carrying US-1 through the Florida Keys. When we get to Miami we’ll check in to the Regency Hotel for $145 a night. During most of this trip, we will try to stay in places for $100 a night, or less. Trust us, that isn’t possible for quality lodging in most of Florida. We’ll get our travel budget back under control in our next state.

Tonight we’re going to The Clevelander Hotel in beautiful South Beach. There is a party 24/7 on South Beach, and the Clevelander is one of the area’s great places to see the party in action. 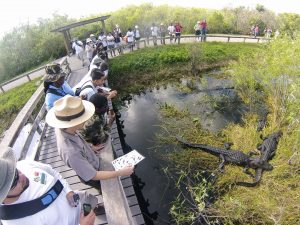 Tomorrow morning we leave Miami for a trip into Everglades National Park. The glades are a signature of Florida, stretching 1.509 million acres through the heart of the state. You didn’t think we would just look from a distance, did you? We’re going on a fan boat excursion set up by Captain Jack’s Airboat Tours. Jack will take us through the country’s largest subtropical wilderness. We’re likely to see some rare and/or endangered species. We are only 42 miles from downtown Miami, yet it feels like a different planet!

We get off the boat and hit the road for Disney World! While this trip is about a lot more than theme parks…DISNEY WORLD, MAN!

Covering nearly 47 square miles,  Disney World features four theme parks. These are Epcot, Magic Kingdom, Disney’s Animal Kingdom, and Disney’s Hollywood Studios. There are two water parks. The larger of the two is Disney’s Blizzard Beach. Smaller (but still mighty impressive) is Disney’s Typhoon Lagoon. We will be here for three days. We booked the Fairfield Inn and Suites at an excellent $154 a night, staying inside the park. Who is your hero now? 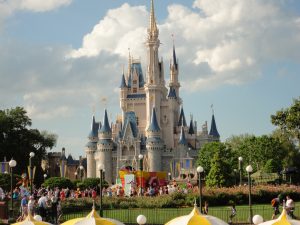 Disney was great, but after three days there we’re all ready for something different, and Cape Canaveral is different. We’re going to visit the vast Kennedy Space Center. There is a bus tour that takes us to all the launch sites, and movies showing the history of the United States and the space race that occupied our minds in the 60s. This place is huge! It really deserves more than a day, but off we go. We’re spending the night at Radisson’s Resort at the Port for $99.

On our last day in Florida, we will step away from the cities and travel through verdant and rural central Florida to Tallahassee. It’s our first look at the truly antebellum South with the gracious folks in Florida’s capital city. Don’t be surprised if they offer you some freshly picked oranges, lemons, or tangerines from their own trees out back. Later, we will visit St. Marks Natural Wildlife Refuge, and stay at the Baymont Inn and Suites. Rooms from $49. That’s more like it.

We started our trip with two of America’s most interesting states, and the two that are, perhaps, the most different from each other. It only reminds us of a promise we make to you here and now. Every state we visit will have interesting places and things to do. We can’t wait to show you what we mean!

“Handbook for Mortals” Tops (Then Topples From) Bestseller List