Ah, the gauzy camera work. The lovers clinched in a passionate embrace. Weather is a factor, maybe ocean fog as in An Affair to Remember. Or, perhaps rain as in “The Notebook.” Often enough, peril is afoot as in “Casablanca.” Star-crossed, think Roman Holiday. These factors make romance movies memorable, running on a loop in our minds whenever we care to think about them. The best online art magazines that focus on film and theater have a Top Seven list of favorite romance movies. Here is the Gildshire list of favorite romance movies with some help from the American Film Institute. (Cue the ascending violin tones.)

“My Fair Lady.” Number Seven for Gildshire, Number Ten: AFI. Released in New York City Oct. 24, 1964, and a week later in Hollywood, My Fair Lady is best-known as a rags-to-riches story, but it plays well today as a tale of women’s empowerment. Eliza Doolittle was a plaything for Henry Higgins. Later, she becomes indispensable, as any good love story demands. Julie Andrews played Eliza on Broadway, but she wasn’t invited to even audition for the movie role. Audrey Hepburn was the filmmakers first, and only, choice. 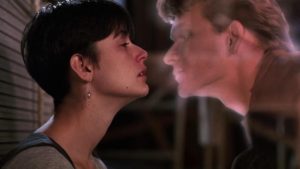 Romance movies DO NOT require everyone to be alive.

“Ghost.” Number Six for Gildshire, Number 19: AFI. Released July 15, 1990, after a Sneak Peek preview as part of a double feature with “Days of Thunder” one week earlier, Ghost is romance beyond death. After all, isn’t love “eternal?” While the initial impact of “Ghost” had to do with its role in the renaissance of pottery-making, the soundtrack was a major part of the movie’s success. Composer Maurice Jarre received a gold record for the soundtrack album, which sold more than 750,000 units in the U.S. and Canada. The Righteous Brothers saw a popularity rebirth for their hit “Unchained Melody,” as a result of its inclusion in the movie. 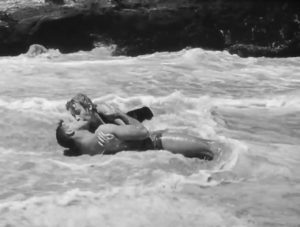 “From Here to Eternity.” Number Five for Gildshire, Number 20: AFI. Love in anticipation of war is an important part of the genre and will show up at least two more times on our list. However, the memorable scene in From Here to Eternity had nothing to do with the perils of war, and everything to do with the perils of lovemaking in the surf. Released in Sept. of 1953, this film was considered risky at the time, as its main relationship is an adulterous one. The Catholic Board of Decency gave it a “B” Rating, alleviating the filmmakers’ concerns that it would be banned by that group.

“The Way We Were.” Number Four for Gildshire. Number Six: AFI. The Hollywood blacklist during the Joseph McCarthy Red Scare is a much debated period in American history. However, this is the only major theatrical movie to tackle the issue. Robert Redford and Barbra Streisand are lovers, doomed by circumstance, and nothing says timeless like “doomed.” “The Way We Were” received Academy Award nominations for Best Actress (Streisand), Best Art Direction, Best Cinematography and Best Costume Design. It was released in October 1973.

“Roman Holiday.” Number Three for Gildshire. Number Four: AFI. Released August 29, 1953, in New York, and Sept. 29, 1953, in Hollywood, Roman Holiday was the first American film shot entirely in Italy. In fact, the Roman ruins are a virtual co-star! Audrey Hepburn’s debut film performance captivated audiences who watched her struggle with duty versus love. Gregory Peck was at the height of his debonair powers as the journalist who falls in love with a princess.

“Gone With The Wind.” Number Two for Gildshire. Number Two: AFI. They say that the emotional journey traveled in a movie is the true measure of its greatness. Gone With the Wind travels thousands of emotional miles, without hardly leaving the plantation.  It released Dec. 19, 1939, in New York, and eight days later in Hollywood.  The opening scenes tell of young men, anxious to go to war. Simpletons and saps, they are. As the Civil War rages all around, the characters mature and change forever. It is an epic tale, love story or not, making it Number Two on our list.

“Casablanca.” Number One for Gildshire. Number One: AFI. From the opening scene, gradually focusing on “Rick’s Place,” to the closing shot, Casablanca is a movie lover’s movie. Humphrey Bogart’s jaw deserved a credit and Ingrid Bergman’s cool beauty likewise. The camera loved them profoundly, and moviegoers did, as well. How beloved is 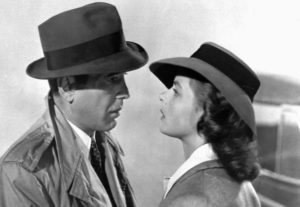 Fog and angst at the climax of “Casablanca.”

“Casablanca?” Watch it again and try not to hope Ingrid turns around. Sure, they will always have Paris. But, dammit, why can’t they have a present and future also. Ah, there she goes…again. Shoot. That’s Casablanca, every time you see it.

That’s our list of romance movies, just like others in the category of best online art magazines. They stick in your mind like peanut butter to the roof of your mouth. Except, you never want the movies to detach. Check with us again in a week, because that’s when “Gildshire Goes to the Movies” will be back for another installment. See you then.