In what can only be described as a move that shook the world of amateur athletics, the International Olympic Committee banned Russia from the 2018 Winter Games in South Korea. Certain members of the Russian team will be allowed to compete. Any Russian athletes ultimately allowed to compete would do so under the designation “Olympic Athlete from Russia” (OAR) with a uniform in neutral colors. Medalists from the banned nation will march behind the Olympic flag at opening ceremonies and hear the Olympic anthem at medal ceremonies.  Gildshire unpacked the reasons, as well as the ramifications.

Russia’s State-sanctioned and systemic doping program brought about the unprecedented act. Apparently, during the Sochi Summer Games, dirty (meaning positive for performance-enhancing drugs) urine samples were openly exchanged for clean samples. Russian athletes openly ingested suspicious pills and powders. It truly was a secret so open as to defy the word “secret.”

The IOC ban extends even beyond the athletes. Russian government officials cannot attend. The Russian flag won’t be present. Current Deputy Prime Minister Vitaly Mutko is banned from all future editions of the Games. His former Number Two at the Ministry of Sport, Yury Nagornykh, is also excluded from Olympic Game activities for life.

The ruling was the final confirmation that Russia is guilty of executing an extensive state-backed doping program. Only the notorious East German doping operation from the 60s-80s would seem to rival Russia’s in size and scope.

Now the sports world will wait to see how Russia responds because some Russian officials have threatened to boycott. However, boycotting an Olympiad to which one was not invited seems a bit empty. 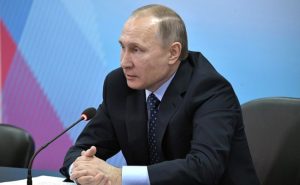 Russian President Vladimir V. Putin takes the Olympics very seriously. His country uses Olympic medals as a symbol of domination and superiority. Political propaganda and the five Olympic rings go hand in hand, not only in Russia but elsewhere too. There is a certain nationalistic jingo to Russia’s Olympic aspirations, though.

The penalty is in line with what’s been advocated by two important whistle-blowers. Their reports upended Russia’s standing in global sports over the last several years. Grigory Rodchenkov, the chemist who spent 10 years as Russia’s anti-doping lab chief was a key figure in carrying out the cheating schemes in Sochi. Vitaly Stepanov, a former employee of Russia’s anti-doping agency was the first to speak publicly about the nation’s institutionalized cheating. Mr. Stepanov recently married a Russian runner.

Though it is a smaller issue when compared to national pride, Russia also incurs a $15 million fine to cover the costs of the investigation. Russia will appeal but will fail in the appeal process. The IOC is undefeated in these kinds of things.

So, what does it all mean? Gone is the pure and original definition of “amateur.” Non-professional athletes already make millions in endorsement deals and “appearance fees.” The Olympic ideal suffers greatly from bribery scandals and other under-the-table financial transactions. What are we, the sports-consuming public, to take from this latest news? Is this the first step in the long walk back to a worldwide Olympics’ operation we can trust?

Maybe it is. If so, this is a hallmark day in the history of The Games. One would like to see it as the first day the tarnish began to come off of those five rings. That’s a good Christmas season story, isn’t it? Or maybe this is a matter of a few people of integrity speaking out because to not do so would be unconscionable. Maybe it is a matter of investigative reporting done professionally and well. That’s another story to tell around the chestnut roasting fire.

Or, maybe it is a one-off and the science of cheating will stay a step ahead of the rules that govern the Olympics, and all other sports. That’s the pessimists’ way of reading the news.

In either case, the news of the Russian ban landed on the sports world like an atomic bomb. The shock waves haven’t begun to hit yet. There will be much more to come. We’ll keep you posted.

10 Decorating Tips For Christmas In A Small Space