Home » Our World » Say Farewell to the Lincoln Continental Forever

Once a symbol of wealth and prestige, and now to the scrapheap of automotive history. The Lincoln Continental is on death row. Lincoln confirmed this week that its most iconic nameplate will halt production in six months. Here was their statement on the matter.

“Lincoln is investing in growth segments, and the brand will feature a full portfolio of SUVs, including a fully electric vehicle in the future. Lincoln will continue to keep its newest SUVs fresh, and we will have more news to share later this year. However, as the full-size premium sedan segment continues to decline in the U.S., we plan to end production of the Lincoln Continental at the end of this year. A 2021 Continental will be available in China.”

Earlier this year, Lincoln announced that the mid-size Lincoln MKZ will be discontinued at the end of 2020. That means, beginning January 1, 2021, Ford Motor Company’s luxury arm will be all-SUV for the first time in its history.

Is this the end of the Lincoln luxury sedan forever?

Not necessarily, but betting on another one is betting a long shot. Instead, the company is totally crossover-centric. The Corsair and the Aviator are today, while the Continental was yesterday.

The Continental that debuted in 2015 looked like a winner for Lincoln, with elegant touches including chrome door handles discreetly integrated into the window trim. This design feature, as well as flexible 30-way power-adjustable seats, both made it to production. Car magazines, as well as the public, raved. 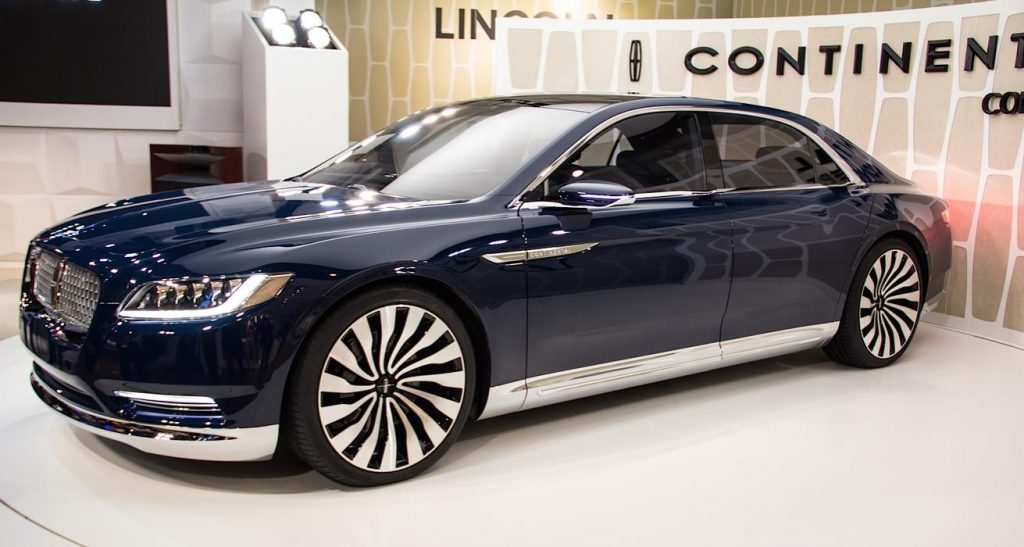 The Lincoln Continental built in 2015 was lauded.

However, Lincoln Continental, once associated with Presidents and celebrities, never recaptured that kind of prestige. Lincoln went all-in with an elegant par excellence Coach Door Edition that cost six figures and sold very well. But the mainstream version never caught on. The initial flurry of sales that greeted the returning Continental in late 2016 fell away in short order. That left Lincoln with a product that boasted more street cred on the other side of the Pacific. Even so, the 2021 Continental for China is to be a one-off and not repeated.

Well, I hope they do not slap the name on some big SUV.

That is not in the plans. Lincoln said, “The Continental has had a rich past, but we are returning the name to the vault.”

A rich past, indeed.

The Continental offered buyers the first production V-12 engine when it first came out in the ’50s. That spawned the beautiful Mark II and the land barges that followed. From 1961-1969, the suicide-door Continental was the rolling definition of American luxury. Continental was Lincoln, and the resurrected 2017 model was a nod to that earlier panache.

The American car buyer took kindly to the Lincoln stable of SUVs, but not so much to the dwindling Continentals.

What is next for Lincoln?

We know that there will be a Lincoln-badged EV based on the Mustang Mach-E. The Ford/Rivian pair-up was to have spawned a Lincoln product, but the COVID-19 ended that effort. But, what is clear for now is that Lincoln is destined to be a non-car make for the foreseeable future. To a segment of the car-buying public, including Gildshire, this is a sad day, as we bid farewell to the Lincoln Continental forever.

What Type of Intimacy Do You have in Your Relationship?