Painting was the only art that brought together the imagination and reality in da Vinci’s eyes. It allowed for every aspect of sight to be captured, unlike sculpture that cannot show light’s effects. Mona Lisa (1503-05) is not only da Vinci’s most famous painting, but arguably the most famous painting in the world. It is at least the most valuable painting in the world according to the museum. Mona Lisa is a portrait of an unknown woman (though there are several theories) painted in a way that creates ambiguity; between her facial expression and the foggy landscape, no one is sure what to make of this composition. The air of mystery is what adds to her value. “Stufmato” is the technique that da Vinci employed to gain this blurring of transitions in his pieces. Without the borders of lines, the colors become foggy, as if like smoke. 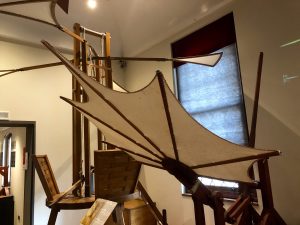 In conjunction with painting, the study of anatomy was important to da Vinci. Understanding the body helped him portray figures in his art. However, anatomy became more than that; da Vinci strived to understand everything around him, thus leading him to explore the “perfect machine,” which is how da Vinci thought of the human body. From the skeletal system to life in the womb, da Vinci drew numerous images to describe the inner workings of the human body. One might wonder how da Vinci, a man living in the late 1400s was able to learn so much about the human body without the technology we have today. Well, da Vinci was able to perform dissections on deceased patients at the University of Pavia thanks to one of the professors there. He even conceived a brilliant idea to cast wax molds of skulls and to be able to study the ventricles of the brain. 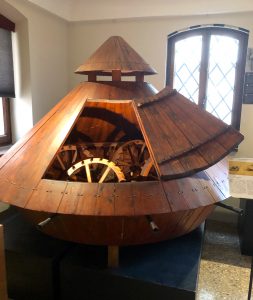 His remarkable ideas lead him to produce prototypes and drawn plans for many inventions. Da Vinci was especially interested in the possibility of human flight and military field aids. Flight was quite a challenge in that fighting gravity and density is not easy. Da Vinci investigated air compression, resistance, mass, force, and so many other factors that configure into flying machines. This one pictured was intended to test the thrust of the wings that would cause the air to compress, thus creating resistance and lifting the device up. In another prototype, da Vinci placed the pilot in the center of two crossed wings, maximizing the strength and force of the pilot’s arms, legs, and head.

One of da Vinci’s larger inventions was the tank. With a round base, the tank could hold cannons that would be able to shoot out at multiple angles simultaneously. Inside are gears that needed to be cranked by eight men in order to move around. While it would be able to move in any direction, it would have taken a lot of manpower and would not be able to move quickly. The museum actually had a virtual reality simulation that took the viewer through multiple military inventions and a flight machine. In the simulation, the tank was shown to be an advanced idea for the time period. The flight machine illustrated the earlier mentioned concept of the cross wings and demonstrated how the pilot would use their body. It was an amazing experience to see how these inventions would work and be able to feel them in the simulation.

Leonardo da Vinci was a genius, talented, passionate, and ahead of his times. He brought vision and understanding to the world. He was completely self-taught and made incredible strides in art, science, and medicine. Da Vinci is rightfully considered the first modern scientist for all that he accomplished and is fondly referred to as a “Renaissance Man.”