Halloween is just around the corner. If your kids love this spooky holiday, think about sharing one of these fun and not-too-scary flicks with them. Some are old, some are new, and all will appeal to both your kid and your inner child. How scary is not-too-scary? It really depends on the kid. We’ll do our best to let you know the age range for these movies, but as a parent, you’ll know better.

In this animated comedy, Count Dracula (Adam Sandler) runs a hotel for monsters and stays clear of people. His daughter Mavis, however, is curious about the human world. When a hiker stumbles upon Hotel Transylvania, Dracula and Mavis try to keep his presence a secret. Rated PG, this movie should be fine for kids 7-years and up. 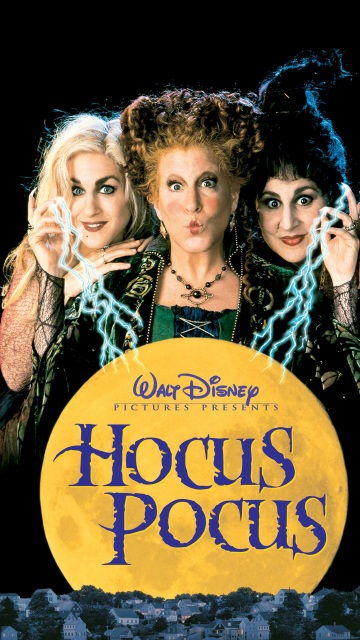 Max Dennison has just moved to Salem, Massachusetts, and is crushing hard on his neighbor. The two kids head to the Sanderson House, where three witches supposedly lived in the 1600’s. After lighting the Black Flame Candle, Max accidentally summons the sisters, played by Bette Midler, Sarah Jessica Parker, and Kathy Najimy. Originally not successful in theaters, Hocus Pocus now airs frequently on the Disney Channel and is a cult-favorite. It should be suitable for kids 8-years old and up.

A Disney Channel original movie, this movie follows young Marnie Piper, who realizes her grandmother is a witch from a magical world called Halloweentown. Despite her mother’s wishes that she stay safe at home, Marnie and her brother sneak off to find their grandmother and help her defeat an evil entity. This movie spawned three sequels, but the original is the best. Kids age 6 and up should enjoy it.

A woman’s father dies, leaving her with a dilapidated mansion full of ghosts. She hires an “afterlife therapist,” who moves into the house with his daughter Kat. There, Kat encounters Casper, the ghost of a young boy. Unlike the other spirits, Casper is friendly and begins to develop feelings for Kat. A bit darker than the original comics, the movie deals with death and grief from a child’s perspective. With its bittersweet ending, it might be too emotional for younger kids, so we recommend it for age 10 and up.

Classic British characters Wallace, an inventor, and his dog Gromit, build a trap to protect a garden from pesky rabbits. Unfortunately, they end up dealing with a scarier threat in the form of a “were-rabbit.” Filmed in a stop-motion, claymation style, this movie is cute and funny. The were-rabbit is not frightening-looking, just big, and sports a bow tie. Because of the British accents, younger kids might have trouble understanding the characters. Recommended for ages 7 and up.

Orphan Luke lives with his grandmother, who tells him stories about witches and their hatred of children. While staying a hotel by the sea, Luke realizes a group of witches is holding a secret convention. He spies on them, learning that they plan to poison children with a potion, turning them into mice. Though the director cut the more-frightening scenes after showing the film to his son, The Witches is a Roald Dahl adaptation, whose works are famously pretty dark. Mature kids and tweens are the best audiences.

On the day of her wedding, a meteor hits Susan, transforming her into a 50-foot tall giant. She is immediately sent to a government facility, where she meets other monsters kept from the public eye. Meanwhile, an alien threat moves closer to earth. This animated movie stars Reese Witherspoon as Susan and is similar in its tone to Monsters Inc, so it’s really not scary at all. Great for any kid old enough to stay entertained by a 90-minute movie.

If you like to spend time clicking around the Internet, you might have run into a few short-form scary stories like Slenderman or The Russian Sleep Experiments. These are known as “creepypastas.” How did they get started?

What is the Key to Mindfulness?