Your travel buddies at Gildshire like to go, well, everywhere. When Woody Guthrie sang, “This Land is Your Land,” he touched on our hometown (near the redwood forest) as well as bucket list spots such as the New York islands and the Gulf stream waters. Travel, history, and memory-making are why we wrote “The Greatest Road Trip Ever Taken,” as a labor of lifelong love. Big sprawling cities are great for nightlife, and filling your days with activities. That said, small towns touched Gildshire’s heart as we traveled the country. Maybe it is the open-hearted smiles we received, or perhaps it was the way we were invited back. Or, maybe our memories of the foods we ate are on our tongues to this day. Small town food is on our mind today. Let’s see what the villages are cooking up in 2019 with the time they save NOT fighting traffic.

The German heritage bespoken by this small town’s mouthful of a name is evident in its food scene, but Bavarian is not Frankenmuth’s only cuisine. It boasts an iconic brewery and a wine bar that makes the locals rave. Our favorite spot? We can’t decide on just one, so we will pick two favorites. The Willis Sausage Company serves more than 100 varieties of smoked meats, and the Frankenmuth Fudge Kitchen satisfies our always inquisitive sweet tooth. They are three blocks apart and on the same side of Main Street.

Don’t judge us until you’ve tried it, because once you try it, you won’t judge us! This small town (pictured above) in Texas’ Hill Country has one of the best Chinese restaurants in the country. Yessir, in the heart of ‘cue country, Gildshire found China Cafe. The pork rib appetizer and the Hot & Numbing Combination in Hot Pot (that’s the actual name of the dish) will make you thank us. 1771 Carl D. Silver Parkway. 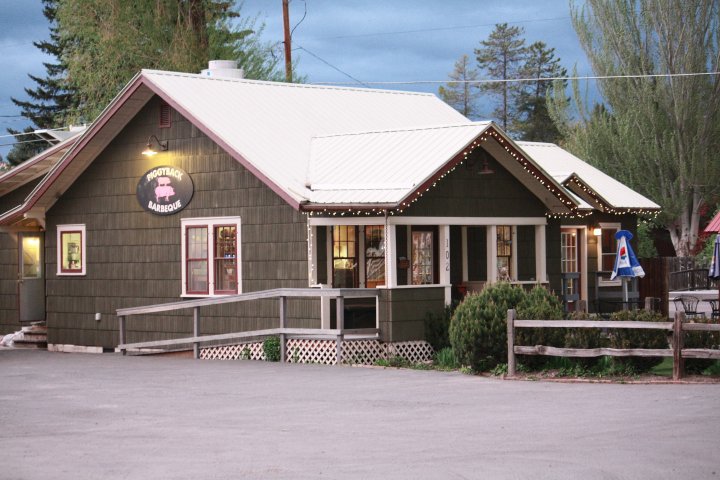 This gateway to Glacier National Park has several good restaurants, including a couple with James Beard’s imprimatur. Gildshire likes the mountain Mexican fare offered at Pescado Blanco and the aromatic barbecue wafting from Piggyback (pictured above). Can’t decide? They are less than a ten-minute walk apart, so let your nose do the choosing.

You may have come to this part of the country for the wine, but it is the food here that will linger on your tongue forever. That’s a bold statement, considering Yountville is in the heart of the Napa wine Mecca. But, we stand by it with gastronomic assurance. The village of Yountville has Michelin stars scattered throughout the restaurant hub (which is all of downtown). Gildshire loves The French Laundry, but who doesn’t? Try Bistro Jeanty’s smoked salmon carpaccio (Saumon Fumé Maison) as an appetizer and their crème brûlée au Chocolat for dessert. For the main course, literally, anything that sounds like greatness will be just that. Walk Washington St (it’s the main drag) through Yountville and these restaurants and several others will catch your eye.

At the top end of “small town” find this vacationer’s paradise on the shores of Lake Michigan. Gildshire came here for the cool summer breezes and the abundant outdoor fun, but we came back for Trattoria Stella and Harvest. The former is headed up by the great Myles Anton and features Italian fare, while the latter began life as a food truck and grew into a brick and mortar go-to for the foodies in town. You’ll need the car to drive the 2.2 miles between the two, but the trip is worth it, no matter which one you choose.

The Future of Payments – What is Blockchain Technology?

How Healthy is Sushi?