Folks who like to drive will try and deny it. Luddites, who are by definition anti-progress in all forms, will plug their ears and go “La-La-La-La!” Pedestrians will look at them with narrowed eyes. But, we’re all aware that self-drive cars are part of the future.  The route they have taken to that future, though, has been a fraught one with overblown promises, false steps, and public relations gaffes, along with an occasional crash. An institutionalized problem? Or par for the research and development course? Perhaps a bit of both. This week, though, SoftBank Vision Fund made one thing clear. They don’t care about hiccups when it comes to GM self-drive cars. Shares of General Motors stock soared when the news of SoftBank’s $2.25 billion investment in the company’s self-drive arm (known as Cruise) hit The Street. Gildshire and CNBC worked together on the research. 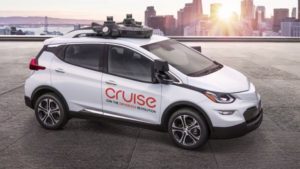 SoftBanks’ investment in Cruise rocked the finance and automotive worlds.

The investment, which means SoftBank will ultimately own 19.6% of GM Cruise pending regulatory approval, came as a surprise to most observers, but GM leadership was quick to exclaim over the deal.

“The investment is “a big recognition and validation of the progress we’ve made over the last couple of years to get to this point,” GM President Dan Ammann said Thursday in an interview on CNBC’s “Squawk Box.” “But I also think it’s a big recognition of the opportunity that lays ahead.”

General Motors was a little late to the self-drive development game, trailing tech giant Google (now Alphabet), Nissan and Toyota. This influx of investment cash, though, means the GM route to self-drive success has the money to move forward and the thumbs-up from one of the major big money entities. Money tends to draw more money when it comes to the start of new products and technology. This can only be good news for GM and a harbinger of enhanced competition to the other self-drive competitors.

So, how long until we see driverless GM cars on the highways? According to the General, expect their self-drivers to be on a highway near you by 2022. That’s not too far away. The future is bearing down on us…and there’s no one behind the wheel.

How A Genealogy Website Caught The Golden State Killer