Speed Limits: Are They About to Go Down?

Home » Our World » Speed Limits: Are They About to Go Down?

The first ever speeding ticket was issued in Providence, Rhode Island 114 years ago. How fast was the scofflaw breakneck driver going? A whopping 12 miles per hour. What was his punishment? Five bucks and a night in jail. Twelve miles pe…wait, did you say JAIL? That’s right. Providence courts didn’t take kindly to motorcars scaring the horses, so they decided to set an example. Since then, of course, the speed limits have gone up considerably. Some would say “too considerably.” Today, Gildshire (your automotive news magazine go-to) examines the new contention about speed limits. Are they too high?

The International Transport Forum seems to think the limits are too high. The ITF is an intergovernmental outfit acting as a think tank for transport policy. They examined road safety stats in ten countries. Their findings? A “strong” relationship between speed and the number of crashes and casualties. 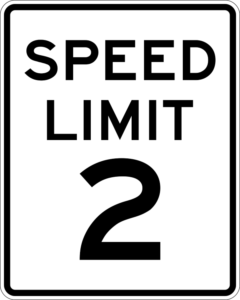 Is this our speed limit future?

What kind of speed decreases does the ITF have in mind? The organization recommends reduced speeds across the board, with limits set according to the levels of survivability should there be an accident.

In a bid to quantify this, the study’s authors proposed a 19 mph limit (in other words, make the usual “School Zone” limit the norm) in residential areas, with a 31 mph limit in other urban areas. The report also suggests a 44 mph limit on rural roads without a divider between opposing lanes.

Interestingly enough, the report made no suggestions for multi-lane interstate highways. In fact, those are where the majority of fatal crashes take place.

While the ITF numbers appear to make some sense, there are voices in opposition. The ITF research flies in the face of a Danish study from 2014. The Danes determined that raising speed limits would reduce the difference in speed between the fastest and slowest drivers, improving safety.

So, can you expect your favorite automotive news magazine to report drastic reductions in speed limits? Probably not without more studies. But, the momentum is there to make the momentum of your car less than it is today.

How Did Halo Top Take Over The Ice Cream Game?