Speeding Ticket Stats: Where Does Your State Rank?

Home » Our World » Speeding Ticket Stats: Where Does Your State Rank?

It is the worst feeling in the world that doesn’t involve a plate of Brussels Sprouts on your dinner plate. You knew you were going a little too quickly, but the road was clear, and the weather was perfect. Also, the game started in five minutes. So, you go above your personal speed limit, but only by a couple of miles per hour. You round the curve and see the cop beside the road. You think you may be another in the list of nationwide speeding ticket stats

“It isn’t like I was driving recklessly, so I’m probably okay. Speeding ticket stats begone!”

You glance in your rearview mirror and think he may be moving.

Are you unlucky, or just in the wrong place at the wrong time? We have all wondered that while the police officer enjoys himself a little too much. Finally, there is an answer to that very question. A Honda dealership (of all things) in Yonkers, NY compiled the speeding ticket data and shared it with us on their website.

A minimum of 14 month worth of speeding ticket information was used to compile the report. Forty-eight states cooperated with the dealership. Only Louisiana and Arkansas failed to submit their data.

Bottom line? I’m an impatient sort. That’s why I speed.

The raw numbers tell us that the states issuing the most speeding tickets were the most populous ones such as California, Texas, Florida, and New York, with Georgia also making the top-ticket list.

However, these numbers don’t tell us the entire story. Cops in densely populated states are sure to hand out more tickets. More people means more cars and therefore more speeders.

Let’s look at the number of speeding citations issued per 10,000 citizens. This is closer to apples-to-apples, meaning states like North Dakota (population: 770,077) can be compared to California (40 million plus). 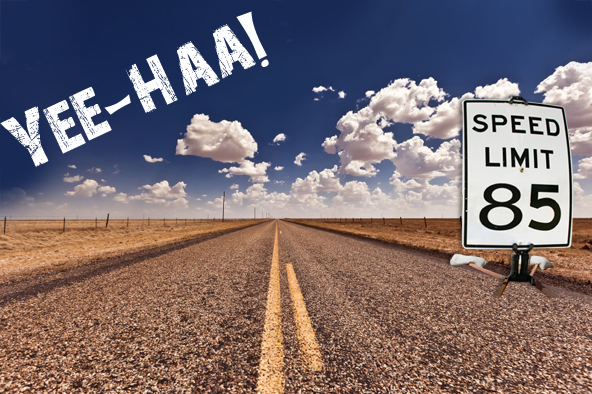 Texas may enact an 85 mph speed limit so fewer citations would be issued.

“So, where should I NOT go on my next road trip?”

If Burt Reynolds’ Bandit is your spirit animal, the danger state, and by a long shot, is Wyoming. While John Law in the state with Old Steamboat on the license plate (true story, look it up in The Greatest Road Trip Ever Taken, on sale on our home page) issued a mere 42,047 tickets in 2017, that’s a startling 903.45 tickets per 10,000 people. Let me put it another way. If you leave Cheyenne and head for Yellowstone National Park, there is a 10% chance that you will visit with a man in a Smokey the Bear hat and mirrored sunglasses.

West Virginia, mountain Mama, take me home on your country roads if I get after it with a little too much enthusiasm. The Mountaineer State issued the fewest tickets of any state in the Union, with just 64.34 per 10,000 residents. North Dakota and Michigan weren’t far behind.

*Some speeding ticket stats for states of note, based on the census demographics of our readers*

California ranks 16th in the nation for tickets issued per capita, but things get a little dicier as Californians venture toward the Canadian border. Oregon is third-worst for speeding tickets, while Washington state is ranked fifth in the nation in vacations ruined. Arizona clocks in at ninth.