Spilling Over: Painting Color in the 1960s at the Whitney Museum of American Art in New York City

Septehedron (1970) is a prime example of what could be done with a geometric shape to make it interesting. (Photo: Ceara Rossetti)

In the 1960s, acrylic paint became a new medium that many artists began adopting. With this new plant-based medium, artists were able to use bold, saturated, and even hallucinatory colors to activate the perception of their viewer. Painting color in this way became something that just bubbled up and spilled over, according to Bob Thompson. The name of the exhibition comes from one of his quotes: ““I paint many paintings that tell me slowly that I have something inside of me that is just bursting, twisting, sticking, spilling over to get out. Out into souls and mouths and eyes that have never seen before.” Thus, Spilling Over demonstrates how painting possessed a sense of urgency for artists who wanted fresh and new art. 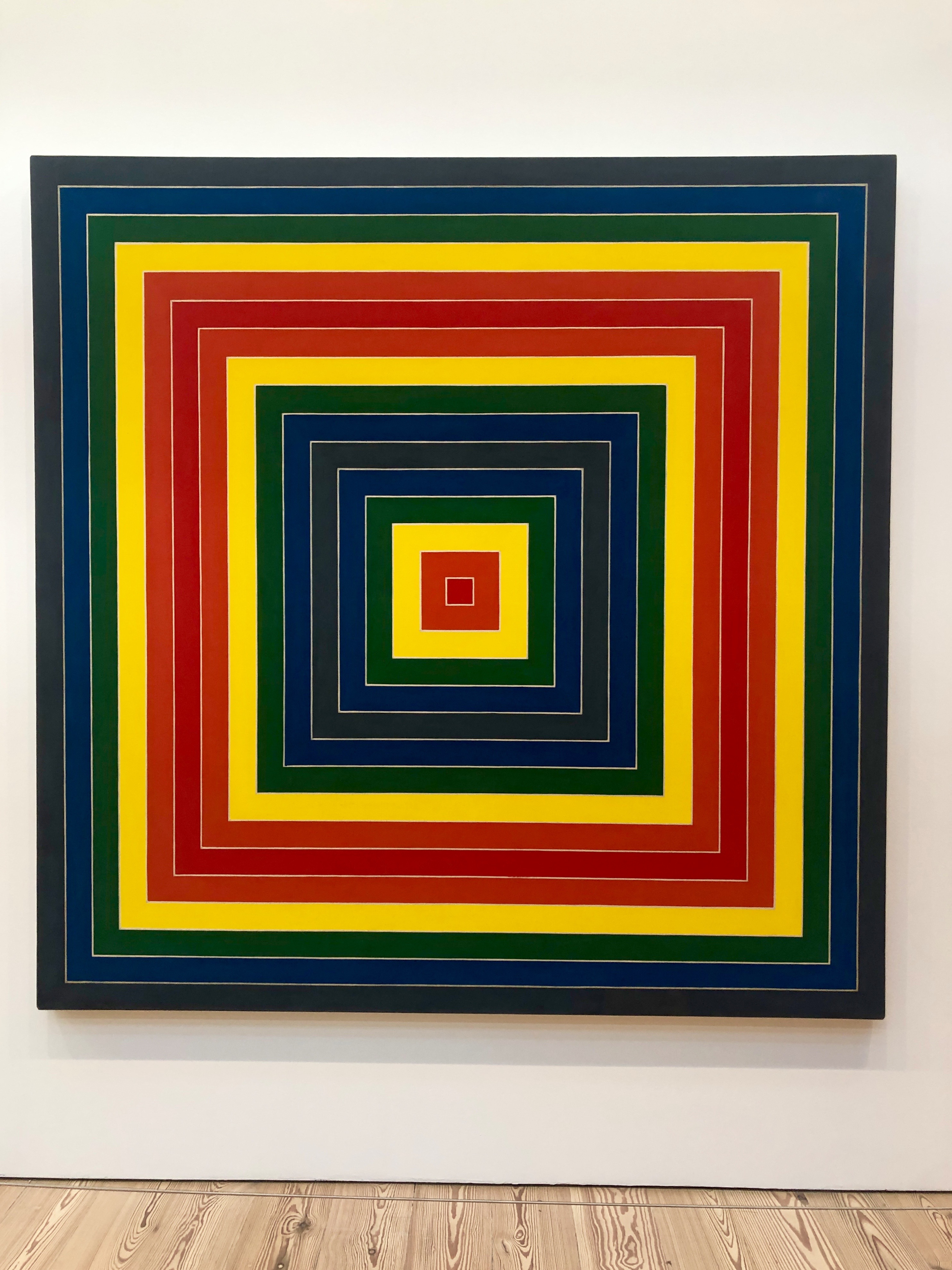 As acrylic was a newly invented medium, many artists began dabbling in using it and experimenting with the possibilities of its usage. Because acrylic is so typical to use nowadays, it is hard to fathom a time when it was just introduced! But alas, this was a time and the 60s was it. The expansive range of technical possibilities that it provided was exciting and riveting for artists and viewers at the time. From paint pouring on unprimed canvases to watering it down and producing watercolor-like effects, the artists of the 1960’s went to town exploring the paint’s materiality.

Frank Stella’s Gran Cairo (1962) is a symmetrical, linear composition that makes color seem to jump from the canvas. The lines of color are proportionate to the dimensions of the canvas, thus highlighting its structure. Doing so with color reinforces the visual energy that he believed to be a large part of abstract art. Stella once said, “What you see is what you get,” which is not only emphasized in Gran Cairo, but in many of his other pieces as well. 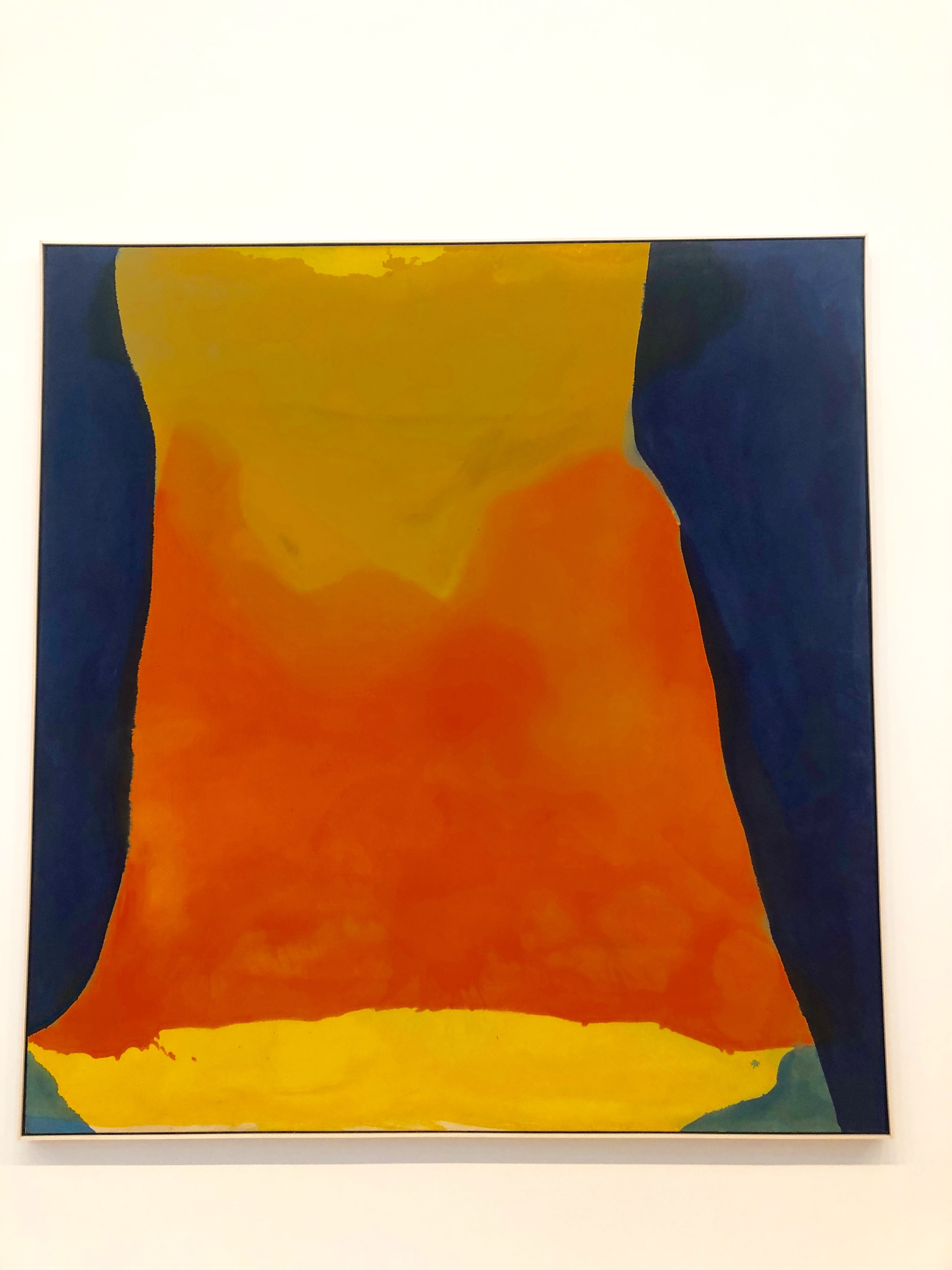 Alvin Loving once said that a geometric shape is a “mundane form that could be very, very dull unless a great deal was done with it.” Septehedron (1970) is a prime example of what could be done with a geometric shape to make it very, very interesting. He used geometric shapes as a plane to dramatize color by juxtaposing neon paint. With this specific piece, Loving created an illusion of different sections of the shape as receding or advancing one another. Septehedron demonstrates an artist’s usage of color to create tension between real and imagined space.

A trademark technique of Helen Frankenthaler was to thin acrylic paints in order to create the effect of watercolor paints. Orange Mood (1966) is no different; she used thinned acrylics to formulate the large expanses of color seen in this piece. The undulating forms bring up vague representations of a torso or of a landscape, depending on the viewer. While Frankenthaler is considered an abstract artist, she never fully relinquished representational forms. In fact, Frankenthaler once stated that she thinks of her art pieces as “explosive landscapes, worlds and distances, held on a flat surface.”

These three pieces are just a handful of the many up for view at the Whitney Museum of American Art. Each piece illustrates the force that color has and the exhibition as a whole looks to the divergent ways that color is both a formal problem, as well as a political statement. The artists that created the pieces hung in Spilling Over: Painting Color in the 1960s were a generation of artists who explored not only new fine arts techniques, but also the ability that color has to articulate questions about perception, race, gender, and the coding of space.

Overall, the method used in these works of bright, bold colored art not only elicit visual stimulation, but also a visceral, physical response.

Kia’s New Pickup to Arrive in the Next Five Years

Gildshire’s Guide to Retirement in a Larger City