Hello, once again fans of cinema wherever you may be. Gildshire’s entertainment arm hopes that the cold winter weather finds you undaunted. If we’re too late for that, allow us to suggest a movie in a warm theater. As the lights dim, with you holding a bucket the size of a Buick filled with popcorn, the weather outside ceases to matter. Read to the bottom, and we’ll let you in on a secret about a friend of ours and popcorn. Don’t cheat and skip ahead, because there are movies to discuss, and that’s why we’re here. Let’s get started with “Stan and Ollie,” which is the winner of the Gildshire Movie of the Fortnight award, one of the most coveted awards around.

“Stan and Ollie” rated PG for some language, and smoking. 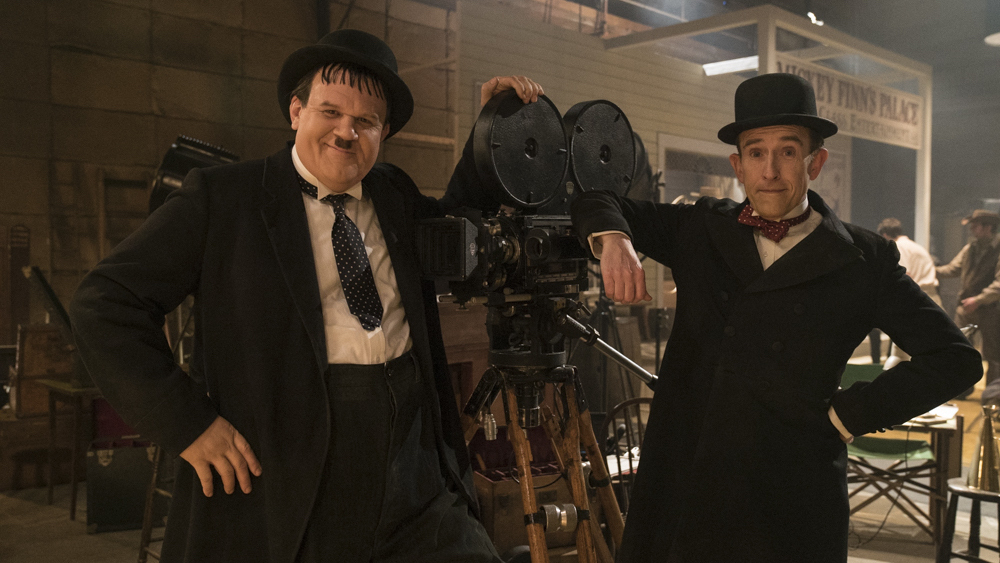 L to R: John C. Reilly (in his best role) as Oliver Hardy and Steve Coogan as Stan Laurel in “Stan and Ollie.”

In their hey-day, Stan Laurel and Oliver Hardy were the biggest stars out there. Not just the biggest comedians, but the biggest stars. This movie (based on real events) shows a bit of background as the act begins to wane and the boys begin to age. It stars Steve Coogan as Stan, John C. Reilly as Oliver, Nina Arianda as Ida Kitaeva Laurel, and Shirley Henderson as Lucille Hardy. Rotten Tomatoes 92, Gildshire 4.7

“Serenity,” rated R for language throughout, sexual content, and some bloody images.

Sometimes a man just needs to get away from the stresses of life and the hassle of dealing with the ex. What happens when she shows up with a sad tale about her new guy? Starring Matthew McConaughey, Anne Hathaway, Jason Clarke, and Diane Lane. Rotten Tomatoes 24, Gildshire 4.0.

“The Kid Who Would Be King,” rated PG for fantasy action violence, scary images, thematic elements including some bullying, and language.

The story of King Arthur has been told on stage, as well as on screen, both big and small. It is a well-worn tale, but one that resonates with every generation. This generation should love their version, as told by this film. It stars Louis Ashbourne Serkis, Patrick Stewart, Rebecca Ferguson, and Dean Chaumoo. Rotten Tomatoes 87, Gildshire 3.1.

“King of Thieves,” rated R for language throughout.

Based on a true story about one of London’s most famous crimes, this is a heist film populated by some of the great O.G. actors working in film. Gildshire finds itself on the wrong end of Rotten Tomatoes more than once this week, because this cast is worth seeing no matter what they do. We’re also a sucker for true stories. It stars Michael Caine, Michael Gambon, Charlie Cox, and Jim Broadbent. Rotten Tomatoes 31, Gildshire 4.0.

What do we know about great painters? We know they are passionate about their craft, that they are often misunderstood, and that they get the prettiest girls. The History Channel series about Picasso taught us those facts, and this movie reinforces. This is an epic tale, traveling through the Nazis and ending up on the Great Plains. Little wonder it takes 3:09 to tell the story. It stars Tom Schilling as Kurt Bamert, Sebastian Koch as Professor Karl Seeband, Paula Beer as Ellie Seeband, and Saskia Rosendahl as Elisabeth May. Rotten Tomatoes 75, Gildshire 4.4.

Until next time…oh, I was going to tell you about a friend of mine and popcorn. She is a member of AMC Theaters A-List. Her password is XtraButter. Now, that’s someone who loves a good movie and the snack best known to go with one. Look for Gildshire at “Stan and Ollie,” and we will see you next time.

Most Common Air Travel Problems And How To Respond