How Super Bananas Could Save Uganda 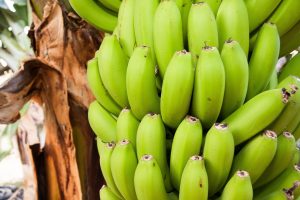 Bananas growing on a tree

For those of us in the United States, bananas are a delicious treat. We like to eat them plain, in ice cream sundaes, and even in sandwiches. In Uganda, their version of the banana – the East African Highland banana – is one of their most important food crops. Ugandans eat about 1.5 pounds of the banana per day, harvesting it while it’s still green and cooking it. Despite the banana’s natural nutrients like high starch content, it isn’t enough to heal one of Uganda’s most dire health problems: low vitamin A.

VAD (vitamin A deficiency) is a major problem worldwide, especially in Africa and Southeast Asia. Symptoms include an increased risk of infections that can led to death as well as blindness. Children and pregnant women are especially vulnerable, as VAD can cause miscarriages and delayed bone development. VAD has also been linked to infertility.

The chemical composition of Vitamin A

According to the World Health Organization, VAD is the leading cause of preventable blindness in children. Of the 250,000-500,000 kids who become blind, half of them are dead within a year. To address this tragedy, a project funded by the Bill and Melinda Gates Foundation and the UK has been working on creating a super banana. After ten years and $10 million, they’ve made a breakthrough.

At the Queensland University of Technology, James Dale and his team have been carefully isolating banana genes and infusing the fruit with genes from a banana from Papua New Guinea, which has a higher vitamin A content.  The new banana has more alpha and beta-carotene, which turns into vitamin A in the human body. This doubles the natural amount of vitamin A, and turns the yellow flesh of the banana a deeper orange. This has earned the super fruit the name “golden banana.”

After experiments with hundreds of genes and field tests in Queensland, the banana is finally making its way to Uganda. PhD graduates who came from Uganda are now carrying the precious genes in test tubes, and will be responsible for field trials. If all goes according to plan, local farmers should be able to begin growing new crops in 2021. The experiment’s results could have far-reaching consequences, and be used to boost the nutritional value of other crops, too. James Dale pointed specifically to the plantain in West Africa, which is one of their staple crops.

The flag of Uganda

Since creating the golden banana involved “tweaking” DNA that already existed, it’s considered a GEO, a genetically engineered organism, and not a GMO, which stands for genetically modified organism. There’s a big backlash against GMOs and GEOs. Just look at the story of golden rice: after discovering that child mortality in an Indonesian village went down by 30% after getting more Vitamin A, the Rockefeller Foundation funded the creation of a fortified rice. That was in 1982. In 2005, ”golden rice” produced up to 23 times more beta-carotene than normal rice, tinting it orange like a yam. In 2013, the Philippine government began to consider growing golden rice, and one of the crops from the field trials was destroyed by protesters. Food scientists blame a misunderstanding of the science as the reason. Humans have been modifying crops since the dawn of agriculture; it’s how we got the food we enjoy today. GEOs like golden rice and bananas are especially important because they can save lives, and represent a sustainable solution to a problem. There’s still some mystery about the long-lasting effects of GEOs and GMOs on human health, but the majority of the scientific community agrees that they are safe, and in the case of VAD, necessary.

2019 update: In the midst of legal issues about GMOs, scientists have obtained a permit and are moving forward with their planting exercise. The hope is still to release a fortified golden banana to farmers by 2021. Click here for more information.

For information on how amazing the normal banana is, check out this article.