Super Bowl History, and How it Came to Be

Home » Our World » Super Bowl History, and How it Came to Be

As the day of the Big Game approaches, Gildshire is brought to mind Super Bowl history. Inaugurated after the 1966 season, it was all about settling the question of which league was better.

“Wait! What do you mean “which league?” Isn’t it all one National Football League?”

At the dawn of time (well, 1920 anyway) a group of wealthy individuals gathered in a Canton, Ohio car dealership to form an alliance of football teams, in which the players would be paid a salary for their participation. For two years it was called the “American Professional Football Association.” In 1922, the founders decided to change the name to the National Football League. The original members were as follows:

The Dayton Triangles, Cleveland Indians, Canton Bulldogs, and the Akron Pros (pictured below). 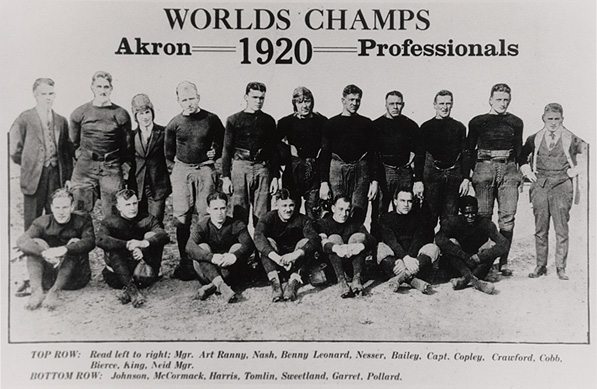 The league may have been Ohio only, but the Akron Pros were “world” champs, nonetheless.

But, the NFL quickly grew from its humble beginnings. It beat back challenges from three other football startups in the first decade of its existence and quashed the fledgling All American Football Conference in 1949 by absorbing its best team, the Cleveland Browns. All was well and professional football was monopolized, until 1959 and the arrival of the upstart American Football League.

The NFL scoffed at the new league, citing poor attendance and inferior play as reasons the new league would fail. But, the AFL had an advantage that previous challengers had not. It was well-heeled financially, and supported by a lucrative television deal, first with ABC and later NBC.

The early 60s were the ramp up to an all-out war between the two leagues. In one two-year span, 75% of the players the NFL drafted from college signed with the American Football Conference instead. The most notable AFL draft victory came in 1965 when Joe Namath signed with the New York Jets. His deal was for $427,000 and a new Lincoln Continental.

“I’ve never heard of the American Football League? What happened to it?”

The bidding wars between the two leagues were driving costs up, and when rich people are losing money, a solution needs finding. It came as the result of a secret meeting in May of 1966 between Kansas City Chiefs’ owner Lamar Hunt and Dallas Cowboys owner Tex Schramm. The groundwork for merging the NFL and AFL was completed by May 31, but the merger wasn’t officially announced on June 6th. Key terms of the deal included a common player draft ending the recruitment and poaching of established players.

Most importantly, to the fans of the two leagues, the agreement also called for a title game to be played between the champions of the respective leagues. The first of these championship games was played January 14, 1967. The Green Bay Packers defeated the Kansas City Chiefs 35-10. The second championship game was played between the Packers and the Oakland Raiders, with the Packers winning 33-14.

It was only in the weeks leading up to Year Three of the championship game matchups between the NFL and AFL that the term “Super Bowl” was coined. Lamar Hunt came up with the term while watching his son play with a “Super Ball.”

The two leagues fully merged in 1970. NFL commissioner Pete Rozelle remained in place to lead the newly configured league. The merger was given public acceptance, partly as a result of Joe Namath’s Jets upsetting the 17-point favorite Baltimore Colts 16-7 in what was to be called Super Bowl III.

There have been 52 games in Super Bowl history (since the first two-games were retroactively named I and II.) Tickets to Packers/Chiefs in 1967 sold for $10, but a ticket to this year’s game will set you back almost three grand to sit in an end-zone upper deck seat. The game is an unofficial national holiday. It accounts for the second-highest dollar amount of alcohol sales after New Year’s Eve. It is one-day that is unsurpassed in the American sports lexicon and will broadcast in 232 countries and territories in 33 different languages.

The Super Bowl broadcast is passed, year-to-year, between CBS, Fox, and NBC. CBS has the broadcast for Super Bowl LIII, this weekend. When CBS announcers Jim Nantz and Tony Romo greet you this Sunday, 5,000,000 more people will be watching than were living in the United States when the NFL was formed. That’s the impact of Super Bowl history. Enjoy the game, everyone.

Is Ford About to Put a Hybrid Mustang on the Street?