You could argue that fan fiction has been around since ancient times. “The Aeneid” by Virgil is a sequel to “The Iliad,” which uses some of the same characters to connect Greek and Roman heroes. “The Canterbury Tales” retells some existing stories, while a lot of Shakespeare’s plays used plotlines and characters his audience would have already been familiar with.

The first clear example of “fanfic” originates with Jane Austen. Her nieces wrote it, with one of them even publishing a collection in 1850. In 1913, another woman published a sequel that brought characters from all Austen novels together. Sherlock Holmes was and still is one of the most popular figures in fanfic, with societies forming to discuss his character and write their own stories. James Barrie, the author of Peter Pan, wrote three Holmes parodies beginning in 1891. Current TV shows “Sherlock” and “Elementary” both fall into the fanfic category because they place the characters in new settings.

Fanfic and the internet

Modern fanfic undoubtedly begins with “Star Trek.” Fans published “zines,” is slang for the magazine, packed with stories. Spockanalia is the first and most famous zine. With the internet, fans had a new forum, but the community was still very small and isolated from one another. “Star Trek,” “The X-Files,” and even “Fraiser” all had their own tight-knit groups, and most of the original sites are long gone. This isolation represents how society at large felt about superfans; they were nerdy and weird. Now, “nerd culture” is mainstream and people are much more open about their ride-or-die love.

Fanfic exists in multiple genres. The “AU” is a common setting, which stands for “alternative universe.” This allows fans to write stories outside of the canon, or established reality of a TV show or other media. Crossovers and fusions are also popular, where characters from other worlds come together, like Sherlock Holmes and Elizabeth Darcy, i.e. Death at the Netherfield Ball. In that same vein, mashup fic features a collision of genres, like in Pride and Prejudice and Zombies, where author Seth Grahame-Smith manages to weave a zombie apocalypse plot into the original Austen book.

Not everyone loves fan fiction 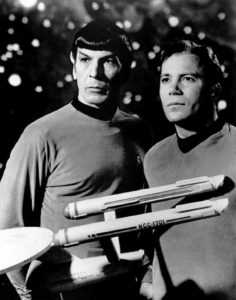 History of Fan Fiction: Spock and Kirk from “Star Trek” are a favorite couple for smut fanfic writers

How do authors feel about fan fiction? Anne Rice (Interview with the Vampire) hates it and threatens legal action. G. R. R. Martin is also not a fan. On the other side, J. K. Rowling of Harry Potter fame welcomes it, saying that it’s flattering that people want to use her characters. Many authors have even written their own fanfic. Neil Gaiman has several examples, including a crossover of Sherlock Holmes and H.P. Lovecraft in his short story, “A Study in Emerald.” As for fans using his characters, he says, “I don’t mind. Have fun with it.”

“Creepypastas” is another writing genre that’s grown since the age of the internet. What are they and what’s the impact on the way we tell stories?

The Benefit of Meal Kits