With all of the new Marvel movies (and DC trying to find its place in the game) I have been thinking a lot about superheros and the way they dress. Clothing is about expressing oneself and when it comes to superhero costumes, their looks helps to portray the persona which they embody. Because of the way that they dress, they are seen a certain way. A person’s appearance impacts the way that they are perceived by others. In the context of superheroes, their appearance gives off a certain identity, while protecting another.

Dual identity is one of the biggest superhero motifs that plays into the costumes that they wear. As a superhero, they want to protect the city (or world) that they live in, but also want to keep their family and friends protected from villains, thus wanting to keep their true identity a secret. In order to do so, they create alternate personas by using costumes. The costume acts as a blurred boundary between the identity of the wearer and the superhero.

Masks are one of the top utilized methods of hiding one’s identity because they obscure the face. Of course, somehow Superman and Supergirl are able to get away without wearing a mask and solely wearing glasses when they are Clark Kent and Kara Danvers, yet no one figures out who they truly are. Besides them, many other superheros cover their faces as to not be recognized.

As an illusionary symbol, costumes as a whole “mask” the body to hide the normalcy and highlight the powers that are normally hidden. The metaphorical shield that is the mask and costume is a vehicle for secrecy, while simultaneously illuminating the powers within. The aspects of costumes that the superhero genre relies on often also relate to animalistic characteristics, for example, Spiderman, Batman, and Catwoman who each embody traits of their selected animal and use attributes to conceal themselves and portray their superhero identity.

The costumes also act as a method of communication. As alluded to earlier, the costume is used as a statement to announce the superhero’s ideals and vigilante actions. The costumes relay the messages that the superhero wants to send to the world, whether it be their ideologies or the type of powers they have. The red, white and blue outfits of Captain America, Superman, and Wonder Woman are transformed into the signs of America. Captain America was literally designed to be the face of America and embody the values of the country. The Flash’s insignia is of a lightning bolt, which is fixed to the center of his chest of his superhero suit. Using the lightning bolt so blatantly is like a warning sign of those he encounters. Regardless of the colors or symbols of a superhero’s suit, the garment itself says speaks volumes to society. 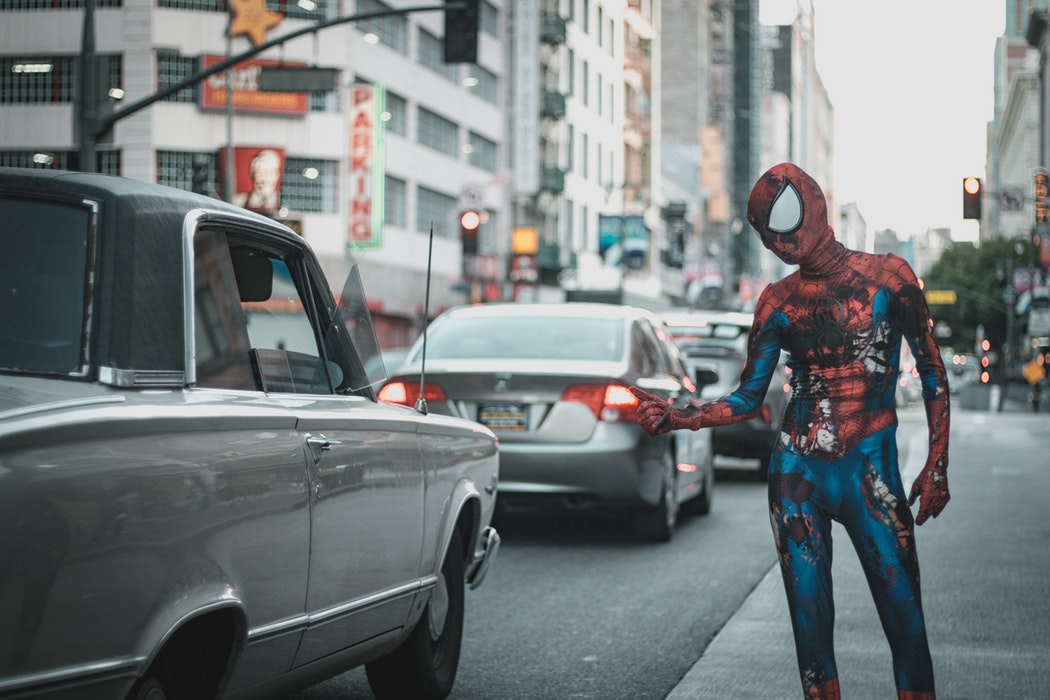 Even through the changing times, the superhero’s wardrobe has remained quintessentially the same, except for the modernization of fabric. In the beginning of cinematic adaptations, superhero costumes were typically made from natural fibers such as wool or cotton. As synthetic textiles were developed, fashion evolved. Tight figure-hugging fabrics, such as the synthetic elastic lycra, gained popularity amongst the cinematic superheroes and because of its “stretch and recovery”, lightweight, colorful, and moisture repellent qualities. This is also where the concept of underwear as outerwear began gaining traction. Its flexibility and suitability were perfect for the type of action that superheroes perform. Lastly, the body conforming aspect also made this desirable.

The hypergendering that occurs in the superhero genre is fortified by the costumes that the heroes wear. Superhero suits dress the individual’s body and transforms the body with attributes and energies that are beyond the natural world, including altering body shape to something nearly impossible or simply highly sexualized. In many comics, the men have bulging muscles, small waists, and chiseled faces. The women have even smaller waists, large breasts, and dainty arms and legs. Mr. Incredible and Elastigirl from Disney’s The Incredibles are prime examples of these stereotypes in film.

In conclusion, the superhero’s costume is loaded with meaning and ideologies that change over time and through perception. They are rooted in disguise, conveyance, and attraction. In this sense, a superhero’s suit really is no different than fashion as a whole – a popular trend perceived by society as meaningful or attractive.