Everyone who mounts a motorcycle knows that the act comes with inherent risks. The frame to human body ratio is alarmingly low, which makes every ride potentially injurious. Comparatively speaking, there is little rubber on the road, which makes every drop of standing water a potential hazard. Then there is the whole “making the motorist see me” part of the equation. Drivers are taught to watch for bikes. Some of them can’t seem to see anything smaller than a water buffalo. It is with the inherent dangers of biking in mind that Suzuki is planning to step into the fray. They want to make bikes and riders more visible, and they want to use…lasers? Gildshire found out about it from Ride Apart. 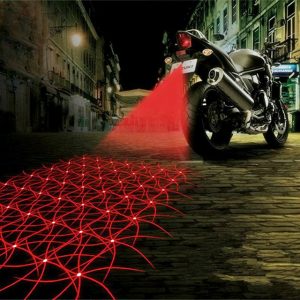 Suzuki believes this is a step toward motorcycle safety.

While it may sound like something borne out of George Lucas’ fevered mind, the idea of laser-enhanced safety is both simple and ingenious. A recent Suzuki patent filing shows a laser-based collision avoidance and warning system. Suzuki’s system projects a dynamic box on the pavement around a bike. The box tightens up at slow speeds, and expands at higher speeds to alert drivers that the bike is there and the safest distance at which to follow.

The warning lights the lights tie into a 360-degree sensor system that detects surrounding traffic. It tells them how close they are to the bike. Tailgate a bike and the rear-projected light starts blinking. Get too close and the innocuous blinking light turns into a GIANT RED X, BURNING INTO YOUR INATTENTIVE RETINAS.

It sounds good, but motorcyclists are asking a salient question. Will it do any good? Bicyclists have found some success with similar, less dynamic systems, but ultimately it relies on a driver’s ability to notice laser images projected on the road surface. Some riders have very real doubts that anything short of a catastrophic collision will make motorists take heed.

So, the tug-of-war between car and motorcycle turns another page. Some bikers await the day of the driverless car, believing they will be friendlier to motorcycles. There is some truth to that. A driverless car won’t text while eating a sandwich in rush hour traffic.

Escape the Room: From Video Games To The Real World