If you’ve ever been to a bubble tea bar, you’re familiar with the routine. You choose between fruity iced teas or a milky tea, with chewy tapioca pearls or jellies. The top is wrapped in plastic so the baristas can shake it, forming a layer of bubbles on top. Stab in a straw, and you’ve got a sweet, cold treat for a hot day.

Bubble tea, or boba tea as it’s always called, started in the 1980’s in Taiwan, but no one is quite sure who to thank. One story is that the product developer of a major tea house – Lin Hsui Hui – got bored in a meeting, and impulsively dumped her tapioca dessert into her tea. After one sip, Lin was hooked, and bubble tea was born. The other story is that Liu Han Chie came up with it after experimenting with serving cold tea with syrups, fruit, candied yams, and tapioca pearls. Bubble tea became very popular and traveled all over East and Southeast Asia during the 1990’s before going over to Australia, Europe, the United States, and South Africa.

Street vendors became a major source of bubble tea, cementing the drink’s status as a street food. The name “boba” came about because people thought the balls looked like breasts, and “boba” is Chinese slang for breasts. There are so many ways to prepare bubble tea. Street vendors typically use fruit powders and syrups instead of fresh fruit, because it goes bad too quickly, and replace real milk with non-dairy creamers. In addition to tapioca pearls, customers can choose from grass or almond jellies, egg pudding, and even red beans. Popping bobas are made from seaweed extract, and have fruit juices inside that burst when chewed. At a tea house in Minnesota, the popping bobas were my mother’s favorite. 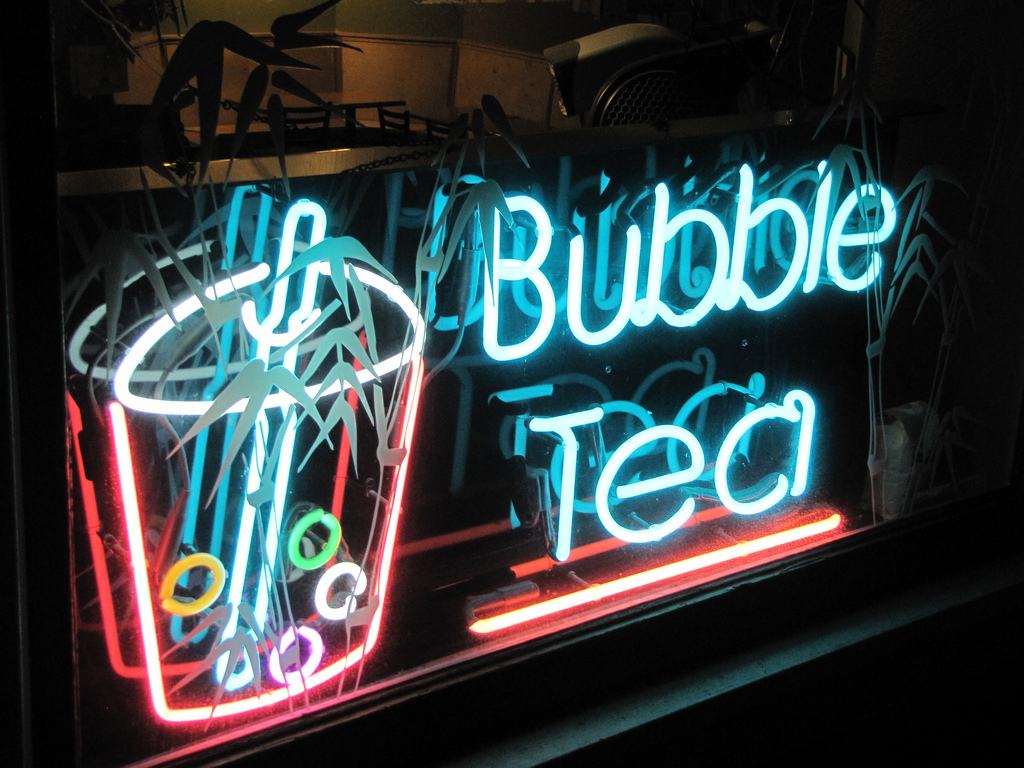 One thing that isn’t up for debate is how the tapioca pearls are prepared. They’re sold dry, and have to be boiled for a half hour and then cooled for a half hour. They can’t be so squishy that they stick together in the cup, but they can’t be too hard either. The perfect texture is known as “QQ,” which means chewy in Chinese.

Once exclusive to Asia, bubble tea houses are making a big impact in the United States. Based in New York, Boba Guys was started by two friends who bonded over their love of ping pong and memories of boba tea. After their favorite shop closed down, they began watching videos on how to create their own, and eventually decided to go into business together. They hype their tea as the highest-quality bubble milk tea in the world. They never use powders or artificial ingredients. The milk is all organic, and they make all their own syrups without fructose. Take a peek at their menu, and you’ll see choices like the Classic Milk Tea, Jasmine Milk Tea, and premium teas like Indian Chai and Coconut Green Milk Tea. You can customize the drinks with tapioca balls, almond jelly, and your choice of milk. If you’re watching your sugar intake, you can even decide what level of sweetness you want, and either get no sweetener added or between 25-100% sweetened!

Just because the word “tea” is in the name does not make bubble tea healthy. The tapioca pearls are made from tapioca starch, which is are pure simple carbs with no nutritional value. Add in fat from dairy (if real dairy is used) and tons of sugar from syrups. One bubble tea can be 300-400 calories with 50 grams of carbs. That doesn’t mean you can never drink it, it just means you should treat it for what it is: a sweet treat.