The Tanzanian Lake So Caustic It Can Burn Your Skin

The Tanzanian Lake So Caustic It Can Burn Your Skin

At first glance, Lake Natron looks like paradise. It’s home to millions of beautiful flamingoes who flock to its shores to breed and feast on the abundant algae. While the lake is kind to these birds, its water holds a painful secret for animals that have not evolved to live there. The water has such high alkalinity, it can burn the flesh right off a person’s legs.

The reason this lake is so caustic is that during the Pleistocene period, a bedrock made of trachyte lavas formed.

This rock is primarily made of carbonate (sodium). So the water and surrounding shore become alkalinized. Evaporation in the area is also high, which leaves concentrated levels of two types of sodium – natron and trona – to flow into the lake from the hills.

The lesser flamingo is specially adapted to live in this harsh environment. The skin on their legs is very tough, so they don’t burn, and they can even drink water from various springs around the lake that are close to boiling. If the birds can’t find freshwater, they have special glands in their head that filter out the salt through their nasal cavities. For food, the flamingos eat lots of algae. The pigment responsible for photosynthesizing the algae is red. This leads to deep red hues in the deep part of the lake, and orange in the shallower parts. Even the salt that forms on the shores and surface of Lake Natron is pink.

Lake Natron has become famous for a series of photographs by Nick Brandt.

The high level of sodium carbonate in the lake literally mummifies creatures that die in or around the lake. This gives them an appearance that some compare to statues carved in startling detail. Brandt would find various corpses and pose them, so it looked like the animals became instantly mummified upon touching the lake. This has led to countless articles calling Lake Natron a “medusa” lake or a lake that turns animals to stone with a single touch. This is clearly not true because of all the lesser flamingos that call the place home. Unadapted creatures that do happen to find themselves at the lake will suffer burns, but they won’t suddenly calcify into salty objects. 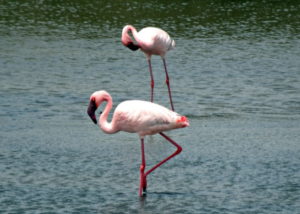 The Tanzanian Lake So Caustic It Can Burn Your Skin: Two Lesser Flamingos

Lesser flamingos love the lake because it’s a good place for building nests and it’s isolated from predators.

However, as could be expected, humanity is threatening the birds’ salty habitat. When a hydroelectric power plant was proposed, environmentalists feared it would drive the flamingos away, who would likely not be able to find another home. 75% of the entire lesser flamingo population is born on Lake Natron. Another potential problem could be a soda-ash extraction operation. A report by BirdLife International warned that this type of activity would be “disastrous” and could drive lesser flamingos to extinction.

There are no official protections on the lesser flamingo, so environmental groups and activists are especially concerned about the fate of Lake Natron. To address the soda-ash plant, the “Think Pink” campaign was launched.  The company responsible for the idea – Tata Chemicals Industry – withdrew their proposal in 2008. But the Government of Tanzania has a lot of interest in Lake Natron and its soda ash. The government claimed mining would have no impact on the bird, which contradicts studies that show complete extinction of the species should a mine be built.

If activists so much as blink, the lesser flamingo could be facing a major crisis.

Lake Natron isn’t really a place for tourists because of its flesh-burning waters, but there is a campsite close by for those climbing a nearby mountain. Click here to read about other dangerous places to visit.