How many times have you heard, “There is no need to reinvent the wheel?” Apparently, Elon Musk and those wacky funsters at Tesla weren’t paying attention. Because a recently published news release from the patent office reveals just what Musk and Company are planning for future Tesla steering wheels. Gildshire got wind of the plans and set out to investigate further. Mediafeed.org helped with the research.

How can we change the humble steering wheel? Apparently, more than we knew. At least that’s the word from Tesla as they intend to introduce touch-sensitive controls, haptic feedback, and an integrated gear shifter.

Surprisingly for a tech patent, the Tesla document includes drawings of how their new steering mechanism will look. It features a bank of controls (touch-sensitive, of course) on the sides of the wheel for navigating the menus and controlling the car’s infotainment system.

What the patent drawings show

The new controls will replace the traditional buttons on the horizontal spokes of current Tesla steering wheels. Among other premium carmakers, Porsche features touch-sensitive technology on the steering wheel of the electric Taycan.

The controls are swiped and tapped, similar to a smartphone’s display. The driver will be able to navigate through Tesla’s elaborate infotainment system without needing to reach out to the large central touchscreen.

The Tesla Model 3 steering wheel is already easier to decipher than most of its competition. A pair of clickable buttons lay under the driver’s thumbs. The new patent explains how the car’s central display would show extra information when the steering wheel’s functions are engaged. One sketch shows a large “fan-speed” graphic that shows that information when the wheel controls are active. 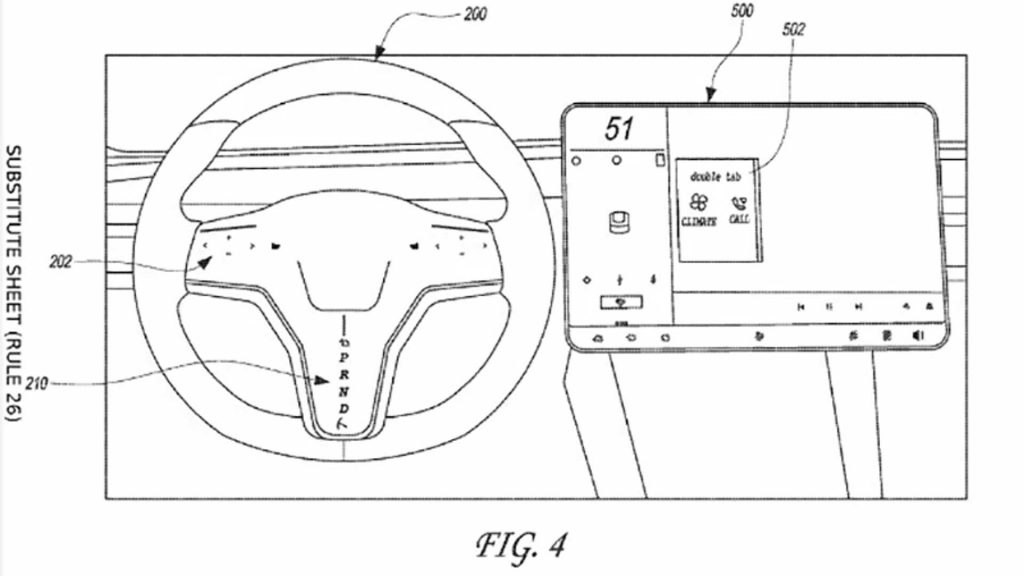 Tesla’s effort to reinvent the wheel shown on their patent drawing.

Interestingly enough, the patent does not mention turn signal controls on the wheel ala Ferrari. But, it shows how a gear selector could attach to the wheel’s central spoke. Such a configuration would remove the Tesla gear selector from behind the steering wheel. It would replace it with touch-sensitive buttons for Park, Reverse, Neutral, and Drive on the vertical spoke. Push-button gear selectors. Back to the future.

Be leery of reading too much into these drawings, though. We always add the caveat that car companies file patent requests regularly. The mere existence of a patent request doesn’t necessarily mean the tech it describes is imminent or even actually planned. However, a patent as detailed as this one makes us believe that Tesla may release a steering wheel with these components when refreshment is due for Model 3 in the years to come.

Not since General Motors put radio controls on the steering wheel back in the late 80s has there been this much buzz about anything having to do with an effort to reinvent the wheel. But, as infotainment screens have gotten about as large as they can, the next logical step is to the left and the ship’s tiller. At least, that is what we read from Elon Musk’s patent request. We will keep an eye on this trend, as indicated by the Tesla patent request.

These Six Words Will Help You Defuse Any Conflict