Raise your hand if this scenario is a familiar one. You’re climbing a 5% grade on a two-lane road, while ahead of you is a loaded semi. The truck driver is doing his best, going down through the gears, and wringing everything he can from his howling diesel. However, you are slooowwwwiiinnngggg down. Finally, doing all of eight mph, you crest the hill, all ready to leave the trucker far behind. Wide open road ahead of you? Nope, headlights. Argh. Be of good cheer. If the engineers at Tesla have anything to say about it, those days will soon be far behind. The Tesla semi with 0-60 in five seconds capability is on the way.

According to reports this week from Motor1, Tesla’s truck performed that very feat in recent road tests. To be sure, the truck was deadheading (what some folks call bobtailing), but even without a trailer that’s some serious performance. Tesla says the semi will reach the same mark in 20 seconds while pulling an 80,000-pound trailer. Those are phenomenal numbers for that kind of rig. More importantly for the trucking industry, and you driving behind it, is that the semi can climb a 5% grade at a constant 65 mph.How did it come about? Is this a one-off parlor trick, played out on the highway?  Gildshire wanted to know. 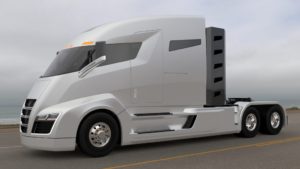 The Tesla semi has futuristic lines, as well.

As it turns out, it is not a trick, and the news gets even better! The electric big rig has a 500-mile range while operating at max Gross Vehicle Weight, and at highway speeds. That’s generally further than a diesel-powered rig can go on a single tank. The Tesla truck aerodynamics include a flat bottom. It also has side flaps that all but closes off the gap between truck and trailer. All combined, Tesla says its semi has a drag coefficient better than that of a Bugatti.

This all sounds almost too good to be true, but one important question remains. Will it take days and days to recharge? In fact, that may be the best news of all. Tesla’s high-speed DC mega-charger can fill the batteries to a 400-mile range in 30 minutes.

In a day and age of vehicle game-changers like the industry has never before seen, this may be one of the biggest. With a network of mega-chargers installed at truck stops and elsewhere,  the prospect of long-distance all-electric trucking suddenly seems very close indeed. Long gone may be the torturous hill climb behind the smoke-belching big rig, thanks to the Tesla semi. That would be a very good thing.