It is hard to truly say what the best books of 2019 were, but goodreads.com held its annual Choice Awards to give titles the revered honor of being the best of their genre. 4,659,817 votes were cast and their voices were heard!  If you are in the market for a new book to read or to analyze your essay, I suggest picking one of these, and a Write My Essay service to cope with the assignment! Besides, it was a difficult choice for us and except for reading books, our young generation has to do their homework, so you can find the homework help on any subject at Domyhomework123.com. The following are the 20 best books in their respective categories and what Goodreads had to say about them: 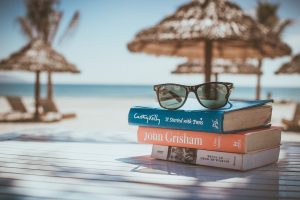 Any of these best books of 2019 can be snagged for some getaway vacation reading.

Author and activist Margaret Atwood wins this year’s Best Fiction award for her long-anticipated sequel to the dystopian classic The Handmaid’s Tale. The book picks up the story 15 years after handmaid Offred’s ambiguous fate in the theocratic nation of Gilead and continues the saga’s dark contemporary resonance. In fact, Atwood’s stated inspiration for her new novel is direct: “The world we’ve been living in.”

Alex Michaelides’ critically acclaimed novel earns the win in the Mystery & Thriller category, thanks in part to its irresistible puzzle-box premise. World-famous painter Alicia Berenson is being held at a secure location in London following a gruesome murder. She refuses to speak. Criminal psychotherapist Theo Faber is determined to unravel the mystery behind the silent patient. Then things get really weird.

Winner of this year’s Goodreads Choice Award for Historical Fiction, Daisy Jones & the Six rewinds the clock to the ’60s and ’70s, then zeroes in on the wild world of American rock and roll music. Author Taylor Jenkins Reid conjures vivid imagery by using the oral history format to provide a collage effect with multiple overlapping viewpoints. As another veteran of the era once observed, rock and roll never forgets.

Author Casey McQuiston puts a delightful new spin on genre conventions with her debut novel, this year’s winner in the Romance category. Alex Claremont-Diaz—First Son and unofficial White House ambassador—has a problem. That problem is Prince Henry, an uptight British royal and Alex’s counterpart from across the pond. The trouble is that Alex doesn’t like the prince. Until he does. And then he really does. Uh-oh.

Screenwriter and novelist Blake Crouch gets his first Goodreads Choice Award with this inventive and ambitious story on technology, time travel, and the essential nature of memory. The book’s decidedly weird science is actually grounded in recent laboratory research, which lends an eerie temporal echo to the proceedings. Also, Crouch suggests an oddly compelling explanation for that phenomenon we call déjà vu.

Perennial contender and scary story all-star Stephen King collects his ninth Goodreads Choice Award with The Institute. Conjuring the spirit of stone-cold classics like Firestarter and It, King’s new saga follows the fate of six supernaturally gifted kids locked into a harrowing facility known only as, yes, the Institute. This King fellow shows a lot of promise. He should have a bright future.

It’s generally acknowledged in showbiz circles that Ali Wong is among the funniest people on the planet. The prolific comic can now add a Goodreads Choice Award to her list of bona fides. Dear Girls is a different kind of humor book: Wong presents a series of letters to her daughters, with insights that bounce from funny to filthy to profound. There’s also a bit on drinking snake blood. Heads up on that.

Author Rachel Hollis wins her first Goodreads Choice Award with this powerful collection of writings for women navigating the complexities of the 21st century. The book has generated its own momentum, and readers continue to praise its clear-eyed approach to improvement and empowerment. “I believe we can change the world,” Hollis says. “But first, we’ve got to stop living in fear of being judged for who we are.”

Best Memoir & Autobiography: Over the Top: A Raw Journey to Self-Love by Jonathan Van Ness

As the breakout star of Netflix’s Queer Eye, Jonathan Van Ness has an army of fans from the show. As an author, he now has another devoted following—and a Goodreads Choice Award. Van Ness chronicles his childhood in a small Midwestern town where he endured years of ridicule and trauma, only to emerge as one of pop culture’s most genuinely inspiring figures. You’ll laugh. You’ll cry. Then you’ll laugh again.

Best History & Biography: The Five: The Untold Lives of the Women Killed by Jack The Ripper by Hallie Rubenhold

In what may be the most overdue book of the past 100 years, historian Hallie Rubenhold steals back the narrative of Jack the Ripper and tells the stories that really matter. The Five reviews the lives of those murdered, rather than the story of the killer, and reveals the inaccuracies and prejudices that have been repeated over the years. Rubenhold’s book is a triumph of historical investigation.

Best Science & Technology: Will My Cat Eat My Eyeballs? by Caitlin Doughty

that we’re generally afraid to ask about death, decay, decomposition, and other depressing developments. With illustrations!

In another win for the Queer Eye team, food and wine guru Antoni Porowski takes the cookbook prize with a collection of recipes that focuses on healthiness and simplicity. Many of the dishes have five ingredients or fewer and can be carried off even by total beginners. Among the offerings: Bastardized Easy Ramen; Malaysian Chili Shrimp; Roasted Carrots with Carrot-Top Pesto; and Salty Lemon Squares.

The Goodreads Choice Award for Poetry came down to the wire and was probably the single most competitive category this year. Author Laurie Halse Anderson receives the honors for her powerful poetry memoir collection SHOUT. Anderson’s work, which includes the groundbreaking 1999 novel Speak, is often about and for survivors of sexual assault. SHOUT is also a National Book Award nominee for Young People’s Literature.

Winner of this year’s award for Young Adult Fiction, Five Feet Apart poses a heartbreaking question: Can you love someone you can never touch? Stella Grant and Will Newman are discovering teenage love—the most potent kind of love—but due to hospital protocol, they’re prevented from getting within five feet of each other. The only way to stay alive is to stay apart. But there’s got to be a way, right?

The coveted YA Fantasy award takes a turn this year, going to the second installment of the faerie realm series The Folk of the Air. From the maker of The Spiderwick Chronicles, Holly Black, The Wicked King continues the saga of Jude, a mortal in the treacherous High Court of Faerie. For those looking to continue reading, the series’ third chapter, The Queen of Nothing, was released in November.

For nine years and counting, Rick Riordan has swept the Goodreads Choice Awards Middle Grade category with his tales of high adventure inspired by the various realms of Greco-Roman mythology. The Tyrant’s Tomb is book four in a five-part series centered on the character of Apollo, who’s sentenced by Zeus to a mortal life on Earth. Parents! What can you do? Look for the concluding book in fall 2020.

Best Picture Book: A Beautiful Day in the Neighborhood: The Poetry of Mister Rogers by Fred Rogers and Luke Flowers

Fred Rogers is having a moment. The beloved children’s TV icon was the subject of a 2018 documentary film and a 2019 feature film starring Tom Hanks. Now comes A Beautiful Day in the Neighborhood, an illustrated treasury of all the classic songs from the TV show, reimagined as poems for the shorter set. Funny, sweet, silly, and sincere, these poems and songs have an essential decency that will outlast us all.

How to Throw Your Friend an Epic Birthday Party