Simone Leigh, a Chicago native currently working in New York City, has been awarded the 2018 Hugo Boss Prize. Her exhibition, Loophole of Retreat, layers a variety of senses to formulate narratives of resilience and resistance and will be open until October 27th, 2019 at the Solomon R. Guggenheim Museum.

The Hugo Boss prize is an award that goes to an artist who has made an outstanding contribution to the world of contemporary art biennially since 1996. The prize has no limitations in terms of nationality, age, or gender. Administered by the Guggenheim Museum, the honoree receives the opportunity to hold a solo exhibition at the museum, as well as receives a tetrahedral trophy and $100,000. 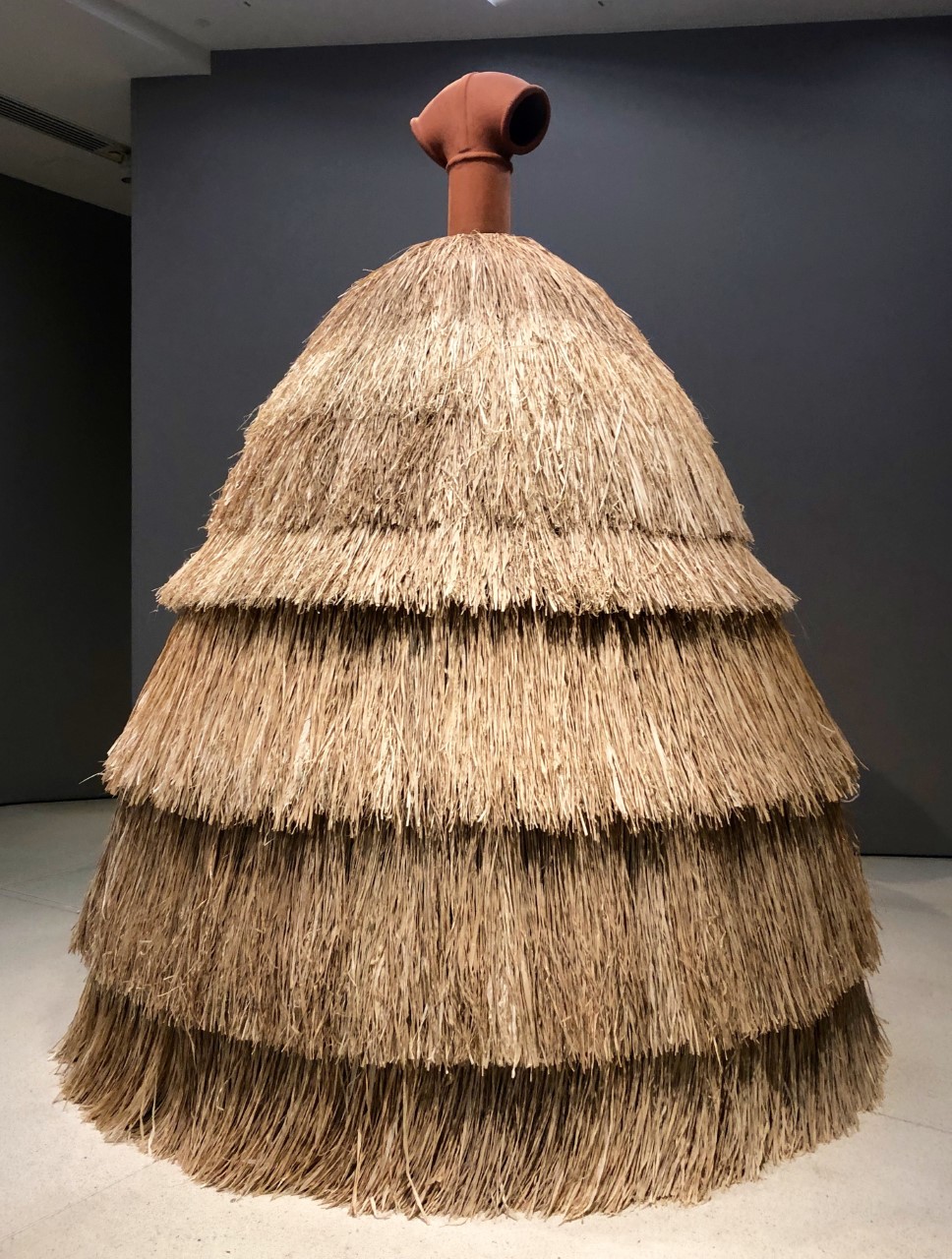 Out of several other nominees, Simone Leigh was chosen by the panel this year. In their statement, the jury said “Leigh has consistently expanded the possibilities of ceramics, which is her principal medium and one that has long been undervalued within the mainstream art world. We are particularly compelled by Leigh’s longstanding and unwavering commitment to addressing black women as both the subject of and audience for her work.” Leigh has described her work herself as being auto-ethnographic and concerned with the marginalization of women of color. She aims to reframes their experience as central to society by using African motifs with modern characteristics. Leigh has pronounced this combination representing “a collapsing of time.”

In Loophole of Retreat, Leigh utilizes form, sound, and text to create narratives that epitomize resilience and resistance. Leigh drew from the writings of Harriet Jacobs, a formerly enslaved abolitionist who published an account of her struggle to achieve freedom in 1861, to come up with the title of this exhibition, as well as of a piece of art. Jacobs explains in her writing how she hid from her master for seven years in a small crawl space in her grandmother’s home and it is this act of defiant fortitude that forged a “loophole of retreat” from an unjust reality, thus serving as a touchstone for Leigh’s commitment to honoring the agency of black women. 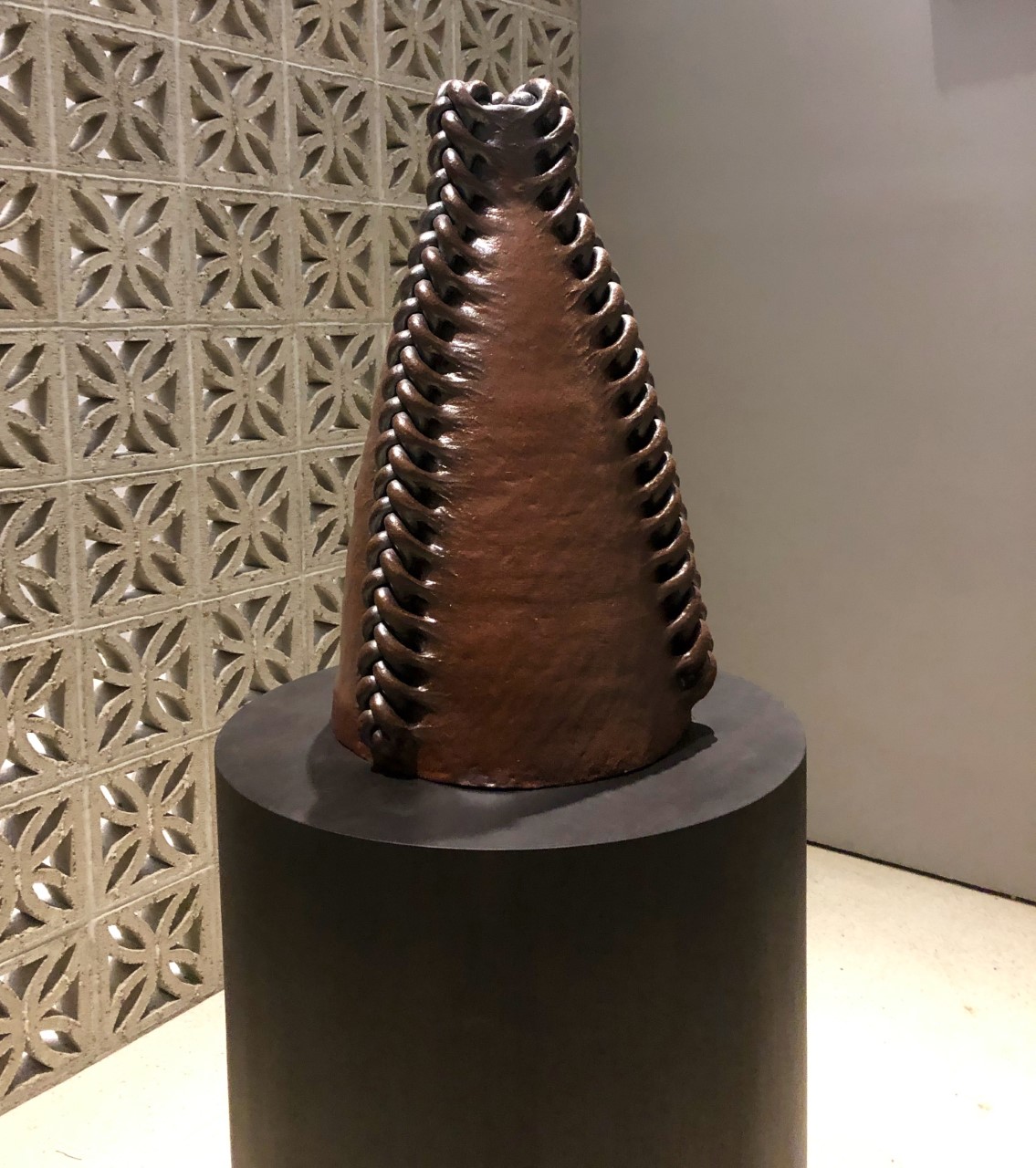 Leigh’s pieces on exhibition all resonate with the human body and senses. She merged the body with domestic vessels and architectural elements that stir up acts of female labors and cares that are often overlooked. The formal qualities of the sculptures are reminiscent of ancient nude statues, African folk traditions, and other various historical references. Leigh refers to this as a process of “formal creolization,” which channels the cultural fluidity that is a legacy of colonialism. In looking at Leigh’s sculptures, the faces do not have eyes. Sentinel (2019) is a sculpture of a woman’s head atop a large drain pipe structure with raffia covering the place immediately below the head. This gives the appearance of the women’s body being hidden and connected to the drain pipe and the lack of eyes illustrates a refusal of a reciprocal gaze, endowing the figure with a sense of autonomy.

In the back of the exhibition sits Leigh’s structure called Loophole of Retreat (2019), which is a wall composed of concrete blocks that recalls feelings of both a prison cell and of a shrine. From it emanates a sound montage of musical elements layered with recordings from news coverage of the 1985 fatal police bombing of the Philadelphia-based black revolutionary organization, MOVE, and a recent protest in a Brooklyn prison. This work of “sonic protection,” as Leigh has deemed it, pays homage to a member of MOVE who secretly gave birth to her son while imprisoned thanks to the other prisoners who sang and made distracting noise so the guards would not immediately discover she gave birth.

Leigh has made strides in the contemporary art scene with her incredible ceramics and thought-provoking figures. She uses many elements to get her messages across and represent the importance of giving marginalized women voices and highlights them in ways others do not.