The Art of Paper Marbling

Marble, with its swirls and curls, possesses one of the most beautiful textures in art. If you ever wanted to get that look unto something other than stone, the craft of paper marbling would be the way to do it. What is paper marbling? It’s an ancient art form created by first swirling paint on the surface of water and laying special paper or fabric on top. The paint and its design sticks to the paper, giving you a one-of-a-kind print. Different cultures mastered this art in various forms and it can even be modified using nail polish. Before you learn how to DIY paper marbling, let’s learn about its history.

In the 12th century, Japanese artists began developing the first marbling technique. They called the art form Suminagashi, which translates to “ink floating.” They would pour blue and black inks unto the surface of a bowl of water and create designs by gently blowing on the ink. It often resembled smoke when applied to the paper. 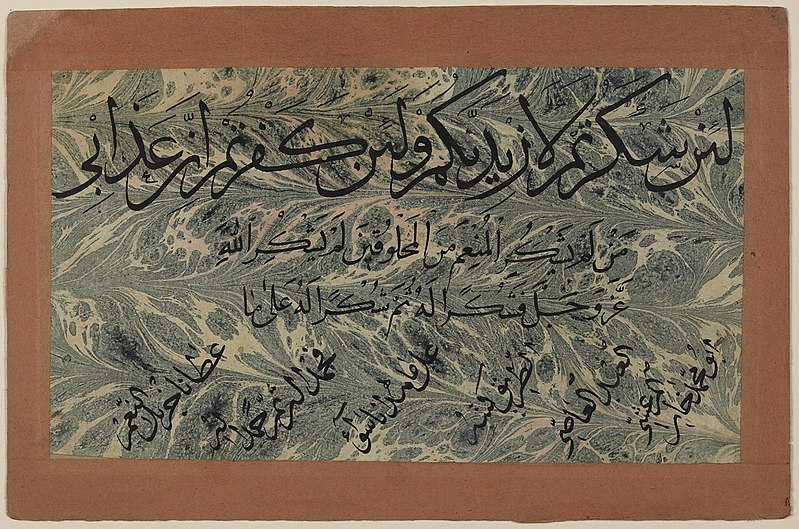 Paper marbling in a page of the Quran

In the 15th century, Turkey and Persia created their own marbling. Erbu or “cloud art” was especially popular in the Ottoman empire, though the term didn’t appear until the 19th-century. You can see beautiful examples of erbu in a text known as “Guy-i-Cevgan,” or “Ball and Polo-Stick.” The borders of this book are decorated using marbling. Instead of ink, erbu artists used oil paints and added a thickened substance known as size to the water to prevent the paint from sinking. This also gave artists more control over their patterns, which they swirled using fine-tooth combs.

By the 17th-century, France, Germany, Holland, Italy, and England began to create marbled paper art. Consumers loved marbling and soon guilds of artists formed. Masters would teach their apprentice, but their exact methods and techniques were a closely-guarded trade secret. For a long time, English bookbinders didn’t know how to reproduce the art, so they had to import a lot of their marbled paper from Germany and Holland. In the mid 1800’s, an English marbler broke ranks and published the technique, allowing bookbinders to complete the art for themselves. Other books followed, despite anger from many members of the marbling guild. 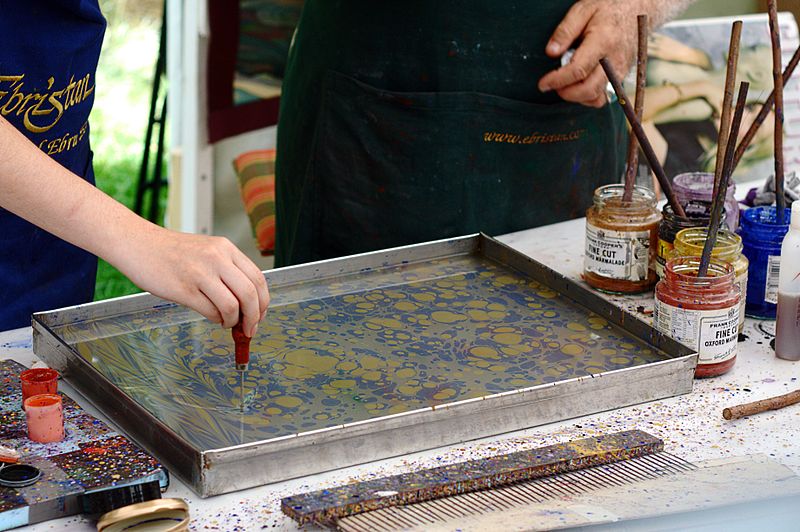 If you want to create a piece of marbling art yourself, you don’t have to be a great artist. You don’t even need paint! All you need is watercolor paper, nail polish, and water. You don’t want to use quick-dry nail polish. To begin, fill your pan with just an inch or so of clean water. Drizzle nail polish on the surface of the water, creating your desired design. As soon as you’re done, carefully lay the paper flat on the water. Grab one corner and “peel” off the paper. Lay on a rack to dry. You’re done! You can find lots of ideas on how to marble other household objects with nail polish, including boxes, mugs, smooth stones, vases, and your actual nails.

While it may seem like a children’s craft, the art of paper mache is actually ancient and can produce brilliant results.