The Best Movies Built Around the Cars That Starred in Them

Movie theaters are opening up around the country. That means that Gildshire will get back to movie previews shortly. Before that happens, though, we wanted to take a run at the best movies built around the cars in them. These are the films from which the plot may escape you, but those cars are remembered forever. See how many of them you remember.

Named for the sound the car made while idling, Chitty was built by Ford and fitted with a Ford V6. Six “Chittys” were made for the movie, and one of them was highway legal. That’s the one that later sold at auction for $805,000. Chitty Trivia: The film was based on a book written by Ian Fleming, the renowned author of the James Bond series.

This run-of-the-mill crime caper was overshadowed by the 1967 Austin Mini Cooper S 1275s that became movie lore. The Cooper’s go-cart style steering and surprising acceleration were part of the chase scene that was this movie’s signature piece. The 2003 remake starred Mark Wahlberg and Charlize Theron. It featured the newer, BMW-built Coopers pictured above.

There were tons of cars in this movie, but Eleanor stood apart. Nicolas Cage’s Pepper Gray 1967 Ford Mustang fastback was depicted as a Shelby GT500. The director asked for eleven Eleanors, but only three of them working models. The filmmaker wrecked two of those.

Automatic (hip thrust), systematic (hurt me), and hydromatic (I’m dead), then it’s the 1948 Ford De Luxe. It populated John Travolta’s daydreams. Only it wasn’t. Travolta sings about the car and calls it “four on the floor,” which means it couldn’t be automatic. Later, in the race scene, Travolta’s Danny Zuko is using a column shifter. Set such things aside, though, because it flew Travolta and America’s Down Under Sweetheart Olivia Newton-John away from the carnival.

Unique among our list of movies, Thelma and Louise drove into eternity with a car driven straight off the lot, without modifications. Chosen for how easy it would be to photograph, the 1966 Ford Thunderbird convertible also spoke to the adventuresome spirit that captured moviegoers’ imaginations.

Just say, “Family Truckster,” to a generation of moviegoers and a smile as broad as Chevy Chase’s comedy style will spread across their faces. The ever bumbling Clark Griswold wanted a sports car but somehow came home with this 1979 Ford LTD Country Squire. Modifications included the pea-green paint, faux-wood paneling, and naturally the eight headlights. Who wouldn’t drive this thing from Chicago to Walley World?

Party on! Excellent! The 1972 AMC Pacer was the ugliest car. But, it carried Wayne and Garth to Stan Mikita’s Donuts. Unique to our list, Mike Myers and Dana Carvey used one Pacer for both movies. Modifications included the hole in the top for the licorice dispenser.

“We’re on a mission from God.” So they were. Jake and Elwood carried out their pranks in past their prime, California Highway Patrol cars. Remember how Wayne’s World used one Pacer for both movies? Blues Brothers wrecked 105 Bluesmobiles.

Steve McQueen’s iconic 1968 Mustang looked fast parked. It was the stripped-down look (no badging) of the movie cars that made them just slightly meaner-looking than production Mustangs. The magnesium American Racing Torque Thrust wheels (which came standard on this model Mustang) gave McQueen’s car its aggressive stance. Steve McQueen was a box office draw, but this was one of the movies built around a hot car.

Smokey and the Bandit 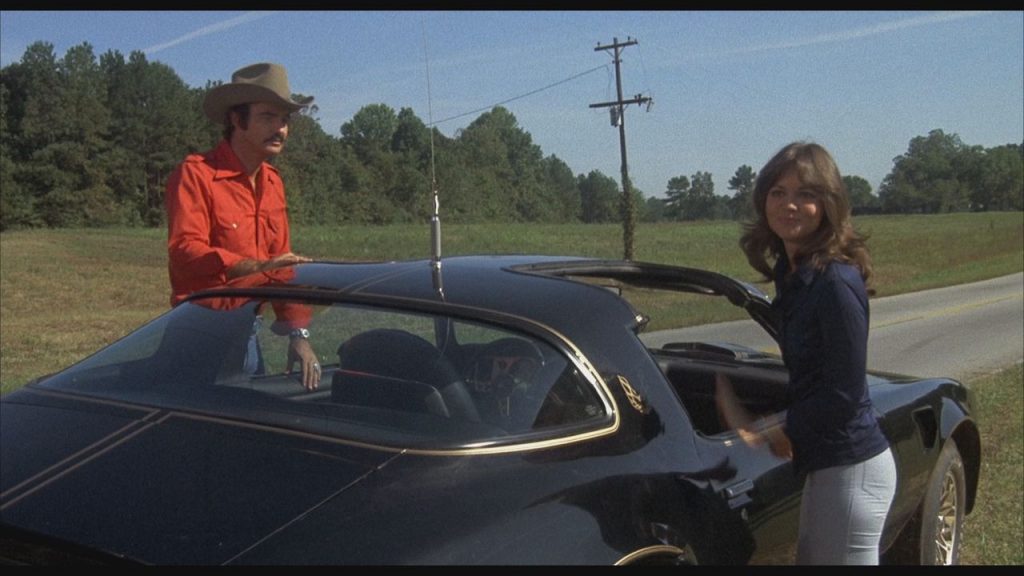 Smokey and the Bandit stands atop the best movies built around the cars in them.

Sales skyrocketed for the 1977 Starlight Black Pontiac Trans Am/T-Top roof combination with this movie. It didn’t matter that this same combination had been available for five years. Some would say the stunts made this car more desirable, but Gildshire says it was the sex appeal of Burt Reynolds and Sally Field that made this car, and the movie, go.

These are some of the best movies built around the cars in them. But, as long as there have been movies, there have been powerful snorting cars that carry the action. Or one AMC Pacer.