If you are anything like us, you may be wondering if 2020 is just a movie without a clear ending. Is it a documentary? That seems unlikely. Is 2020 a family comedy? That seems HIGHLY unlikely. A horror flick, meant to be watched at a drive-in with a bucket of popcorn, and your best boo? Now we’re getting closer. At any rate, however, the movie that is the year 2020 ends, it will be a surprise. We know that because we didn’t see any of it coming so far. That’s what made us start thinking about surprise endings in our favorite movies. The best surprise endings are the ones that made us remember them for years to come. Here are our favorites. Sorry for the spoilers, but chances are you have seen all of these movies several times.

Planet of the Apes, released in 1968. Starring Charlton Heston and Roddy McDowell.

(Pictured above). It is the first massive “twist ending” most of us ever saw, but there’s an exquisite perfection in this film’s last scenes. We watch the entire movie believing a stranded astronaut (Heston) is on a faraway planet that is governed by a race of super-intelligent apes. Then we find out, through one of cinematic history’s best moments, that the astronaut is on Earth, but on Earth’s distant future. The apes took over because humans were destroying themselves with war.

Another iconic twist ending that became entrenched in popular culture. A low-level crook (Spacey) is the sole survivor in a horrible massacre. He spins a wild story about what happened and how everyone wound up dead. Finally, we realize this greasy thug’s story is hokum, and that he is the Underworld kingpin everyone is hunting.

Forget the scene that made a generation of girls take baths, and focus on the creepiest finale in the decade of the 60s. We know all the way through the movie that Norman Bates (Perkins) was an ultra-weirdo who Mom kept on a leash. But when a low-life embezzler and adulteress is missing, and Norman’s affairs come to light, a gruesome secret is revealed. Norman’s mother died many years earlier, and her son liked to dress up in her clothes and hack up a storm.

The Empire Strikes Back, released in 1980, starring Mark Hamill and Harrison Ford.

“Luke, I am your father,” has become both a movie trope and a meme to the point that it has lost its bite. That’s too bad because this was the culmination of a three-year quest into Skywalker’s origin! Or should I have said Dum, Dum, Dum!!! Little did we know it would also be the beginning of, “Wait! Did Han kiss Leia? Doesn’t that mean…???

No Way Out, (pictured below) released in 1987, starring Kevin Costner and Gene Hackman. 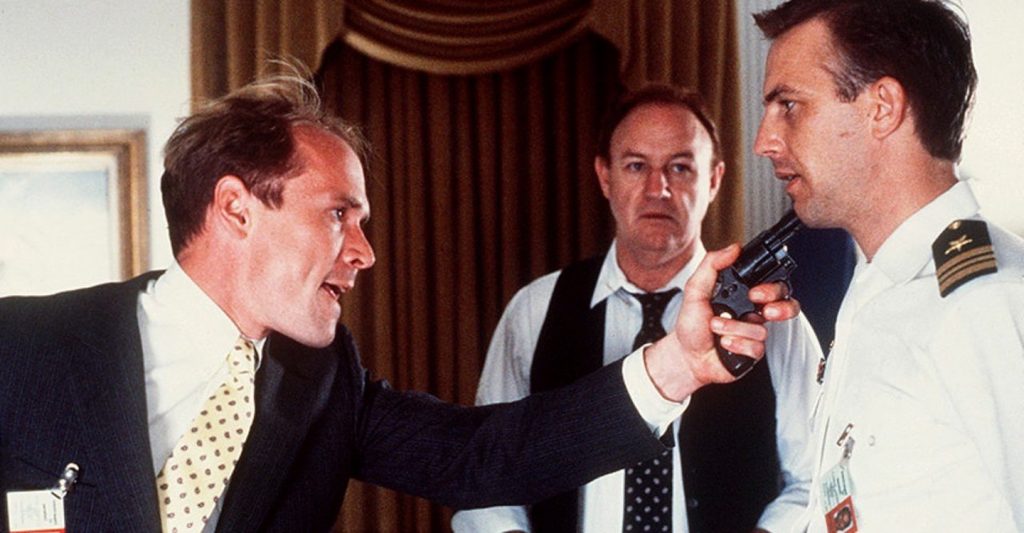 One of our favorite movies with the best surprise endings.

The Cold War has never really ended, only the battlefield has changed. We know that now, and we first heard of it in this Russo-American spy thriller. Kevin Costner is tasked to find a Russian agent, and the agent turns out to be closer to him than he ever suspected. I’m not going to reveal the twist in this one. Watch it, and you will also be treated to one of movie history’s great car make-out scenes, as well as a great twist at the end.

Teddy Daniels (DiCaprio) is a United States Marshal investigating some odd occurrences in a lunatic asylum. At first, he doubts the purpose and mission of the asylum, but things only become more confusing. As it turns out, Daniels’ “mission” was an elaborate ruse. You see, Daniels is NOT a Marshal. He is a murderer inside the asylum.

While not every movie can have of the best surprise endings in movie history, we cherish the ones on this list, and the many more that are out there. Your favorite may not even be on our list. But, better a good twist at the end of an average movie than the best predictable rom-com. That’s our position, and we’re sticking with it. We will catch you on the B roll, the next time we talk about movies.

How to Keep Armadillos from Ruining Your Landscaping or Garden

All You Need to Know about Car Auctions: Facts and Figures